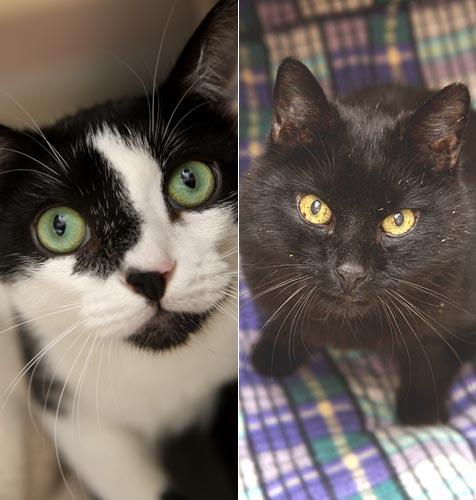 Scooter the cat with two legs is a figurehead at the sanctuary. For years, he’s been the only cat at Best Friends without back legs. He scoots around just fine without them, too … hence the name! But he’s a teensy bit concerned over a recent development. Soon, Scooter is going to have to share his two-legged status with another cat.

Bubba-Lu came to the sanctuary months ago as an injured stray from rural Louisiana. A car accident left Bubba-Lu without the use of his back legs. Even so, he didn’t let that get in his way for a second. Within no time at all after coming to Best Friends, Bubba-Lu became known as the cat who liked to zoom through his play area, a streak of black and white fur powered by two legs. Those back legs don’t cramp his style, but they do tend to get in the way. He has to drag them everywhere.

The vets at Best Friends thought long and hard before deciding to amputate. Major surgery is no small matter and they wanted to be sure it was the right move. In the end, they were worried he might develop serious rub sores that could then become infected. Bubba-Lu has no feeling in those legs, for one thing, and if he was hurt he wouldn’t even know to give cues.

After lengthy consideration, the vets decided amputation was the best treatment. But they didn’t want to remove both legs in one surgery. They felt if they could amputate one at a time it, would give Bubba-Lu a better chance to heal up without aggravating the incision area. He’s already been through the first surgery and is doing fantastic. No problems with the recovery at all.

So here’s the real question: What will happen to a cat who can already fly through the room like a kitten after a butterfly once those awkward, useless legs are no longer dragging behind him every step? Hmm … it looks like Scooter has every right to be a little nervous about losing his spot in the limelight. It’s OK, Scooter, everybody still loves you. Besides, Bubba-Lu’s a great guy. He promises to do two-legged cats proud!

All of the special care for animals like these is made possible through your support. Thank you!