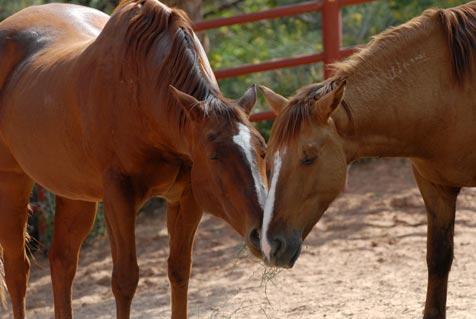 Chewy the horse mellows and makes a horse friend

Sometimes the simple decision not to lean over and strangle somebody can be a major victory. For Chewy the horse, it’s a breakthrough every time he sets foot in the same pasture with another horse and holds his cool. And until recently, it was a battle he usually lost. Let’s just say he didn’t play nice with others.

Chewy came to Best Friends as an intact stallion. Stallions, of course, are more likely to be aggressive than geldings. The thing is, he actually got along pretty well with other horses as a stallion. It wasn’t until after the gelding operation that he decided all other horses were mortal enemies. Go figure. It’s Chewy’s style. He likes to do things his own way.

Finding a horse friend for Chewy

It hasn’t been easy finding a friend to share Chewy’s pasture. Each time someone tries, he gives them an eviction notice before they can set down their luggage. The real concern, however, is that this behavior was keeping him out of a home.

One family even considered adopting him, but in the end, they couldn’t take a horse who wanted to throttle every other horse within a five-mile radius.

So, the caregivers decided to give it one more try. They really schemed over this one. They knew a submissive horse wouldn’t work—it hadn’t worked before. And they’d never dream of trying to put him with a dominant horse. (Can you say World War III?) But what about a horse who simply didn’t care one way or another?

Enter Cowboy. Cowboy is a big, strong, stout, laid-back horse who doesn’t get riled up much at all. He could probably do yoga during a Fourth of July celebration. Cowboy is not a pushover, but also not somebody who is going to pick a fight. A nice, happy medium.

And guess what? It worked! They’ve been getting along just fine, which means they’ve more or less been ignoring each other. Hey, that’s huge! The bad-boy routine is already starting to crumble. If Chewy’s not careful, he might just find himself in a loving home. Way to go, Cowboy! Whatever they’re paying you, you should ask for double.

Photo of Cowboy (left) and Chewy by Molly Wald

Learn more about Chewy or Cowboy on the Adorable Adoptables pages.