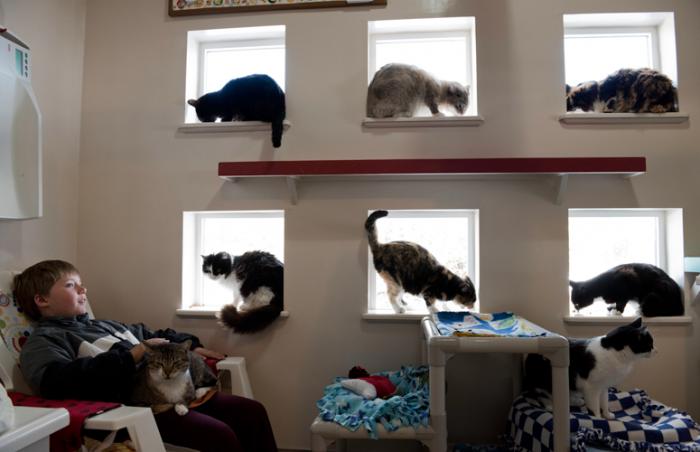 Ever since he first visited the Sanctuary with his grandparents when he was seven years old, Jacob has taken every opportunity to come back again. Now 11, he has about half a dozen trips under his belt, and, as a volunteer, he’s finally found his niche.

Like his grandmother, Ruth, who helps out at a cat shelter back home in Washington state, Jacob naturally gravitates toward cats. Although he’s volunteered in several other animal areas at the Sanctuary, Jacob keeps returning to Cat World, which is “positively” his favorite. 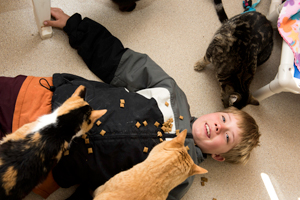 Jacob has worked in nearly all of the Cat World buildings where volunteers can help, but his favorite place is Calmar’s. That's the building that houses cats with feline leukemia (FeLV), a virus that affects cats’ immune systems, making them more susceptible to secondary infections and possibly shortening their life spans. Upon learning this, Jacob decided to dedicate his volunteer time to helping the Calmar’s cats live the very best life possible.

At first, he felt bad for these cats. But then he realized that Calmar’s is where they get the best treatment and, since then, he has allowed a few very special cats to steal his heart. He loves hanging out with Annette, a petite brown tabby cat who lives in the lobby and is content to sit and let Omar, a former shelter cat with long, brown-black fur, climb onto his shoulders for a snuggle.

Jacob also noticed Barney and Bo, two very popular cats who, he says, have personalities that are even bigger than their bodies. But it was Bert, a former cover-model cat for Best Friends magazine, who won some extra attention from Jacob. The two did some training together: Jacob taught Bert to stand on his back legs to lick baby food off a spoon.

Being helpful and industrious, Jacob rearranged furniture and outfitted almost every chair in Calmar’s with fleece blankets that his grandmother had made and donated. He even found a way to help the Sanctuary’s wildlife while keeping the cats entertained. Jacob and his grandparents bought a bird feeder and set it up outside of Calmar’s in a spot that’s close enough for the cats to see the birds clearly, but far enough away so that the birds feel safe. Pretty soon, a cat was situated in each of the six windows on that side of the room, birds were happily pecking at the feeder, and a wild turkey was grazing on some seed scattered on the ground.

Donated fleece blankets and beds for the cats 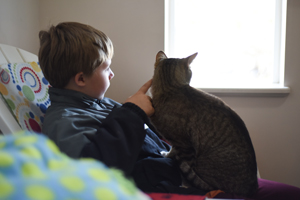 The four days that Jacob and his grandparents spent at the Sanctuary went by quickly, but they left behind some things that will help the cats remember them for a while. Ruth donated hundreds of handmade fleece blankets and beds, and Jacob gave a very special gift. Instead of asking for presents for his birthday (in early December) or Christmas, he asked his grandparents for cat food and treats for the Calmar’s cats.

Jacob’s grandfather, Art, says he’s “pretty impressed” with Jacob’s attitude toward all animals, especially the cats. Although it was soon time for Jacob and his grandparents to head back home to their own animals (which, for Jacob, includes plenty of cats and a flock of ducks, geese and chickens), there’s no doubt that some of the bonds he’s formed with a few of the Sanctuary’s most special-needs cats will last, and be renewed when he sees them again.

Want to help out too? Become a volunteer.