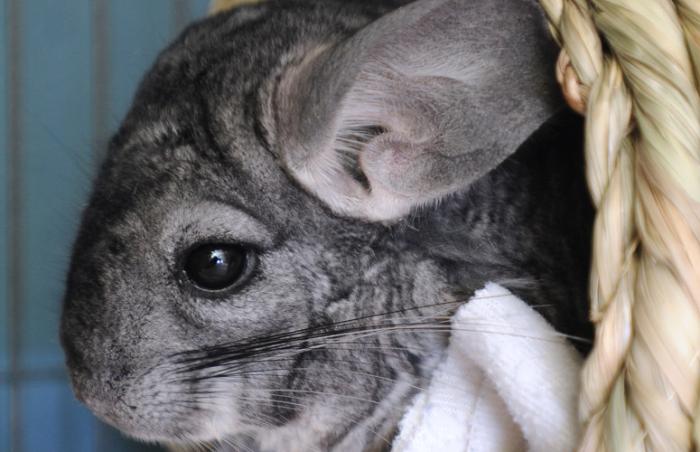 Moped the chinchilla is normally quite sedate. He isn't keen on being picked up, but he appreciates a little petting. Whenever he's not entirely content, he makes a gentle grunting sound, which means, "Stop. That's enough!"

Mostly he just enjoys following people around as they change the bedding and the furniture in his multistoried cage. Like all chinchillas, twilight and dawn are his favorite times of day.

Moped and his mate, Scooter, originally had a kind family who loved them, but Scooter's medical problems required specialized attention that they weren't able to provide, so the two came to live at Wild Friends for some special care. Sadly, Scooter crossed the Rainbow Bridge a while ago. 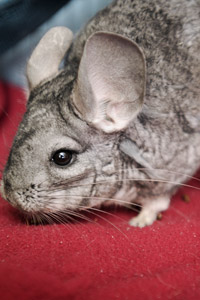 Moped is in good health, and is keeping his eyes open for a lovely family with access to a good vet who specializes in exotic animals - mostly to help with his teeth. Did you know that a chinchilla's teeth never stop growing? Chinchillas always need to have a little extra attention paid to their teeth.

They're extraordinary animals. Originally from the mountains of Peru and Chili, where it can be quite cold, they don't do too well in the heat. Around 65 degrees is a very comfy temperature for them, and they shouldn't ever be in an area that is above 75 degrees.

Unfortunately, there aren't too many chinchillas left in the wild these days. Their fur is so soft and beautiful that they were extensively hunted.

Moped enjoys sitting on his marble slab because it's nice and cool there. His very favorite thing is to squeeze into a small space. Maybe he feels especially secure that way. He likes to climb to the top of his stairs and then sit and look around, noticing everything.

He has a wheel, but he thinks it's rather silly, and so he doesn't use it.

Chinchillas have rather delicate digestive systems, so Moped is very careful with his diet. He loves pellets of Timothy hay and other grasses. He won't eat hay unless it comes in pellets. A very small bit of fruit and greens, with an occasional piece of raisin, he finds delicious.

Looking for a good buddy

Moped has no fear of dogs, which is good, because his office companions at Wild Friends are three dogs of varying sizes. He enjoys watching them from the superior height of his cage.

Moped is about seven years old now. He'd love a forever home with you if you're home a lot and could give him lots of time and attention. He's looking for a very sweet human and maybe another chinchilla to spend relaxed, happy times with.

If you are considering adopting any exotic pet, make sure that the animal was rescued by a reliable organization. You'll also want to ensure that it is legal in your state to keep this particular animal as a pet and that you have access to an exotic animal vet, as well as all the other specialized resources required to give the animal a good home and appropriate care.

There are many wonderful companion animals, like Moped, at the Sanctuary looking for their forever home. Browse through their pictures and bios.