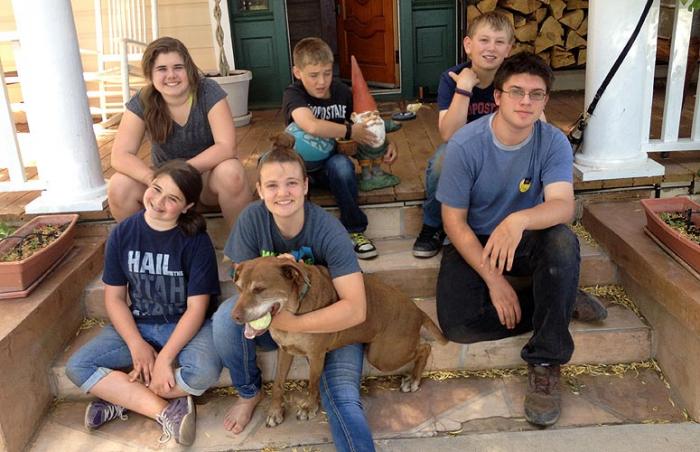 When one thinks of a religious mission trip, it’s generally an effort by people of faith to spread their beliefs and provide service work for people in need. However, St. John’s Youth Group of Logan, Utah, thinks outside the box. Group members considered all of God’s creatures when they chose their destination. After three years of fundraising to save enough money to take their trip, they had to decide where to go and help. When someone suggested Best Friends, the decision was easy.

“I guess that says something about our kids and their big hearts,” says youth group leader Melissa Scheaffer. “Not that they don’t care about people. We just have a special group of kids that have a love for animals.”

So, the group of four adults and eight adolescents traveled almost 400 miles from Logan to the Sanctuary. 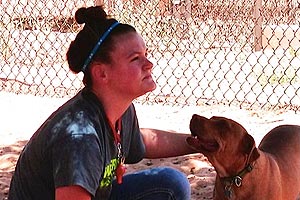 “They loved it all, but their favorite part was getting their hands dirty and really feeling like they made a difference,” says youth group leader Krista Melani.

While cleaning one of the Dogtown runs, 15-year-old Maren was forewarned that Lakota was afraid of new people. However, the longer she worked, the more he warmed up to her. By the time she completed cleaning his kennel, he was actively soliciting attention and kissing her, amazing everyone with the transformation.

And the kids were all thrilled to meet Ray, one of the Vicktory dogs. Rescued by Best Friends from football player Michael Vick’s dogfighting operation, Ray has blossomed from a fear-filled victim of cruelty to a beloved family pet.

“That really resonated with the kids,” says Melissa. “I think they got the magnitude of what Best Friends does.” 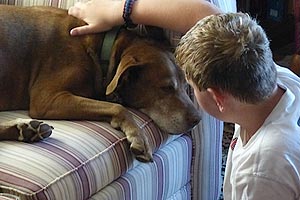 The volunteer experience continued, even into the evenings. The first night the group decided to take Chief the dog for a sleepover. The kids loved having Chief so much, they begged for a second sleepover. Little did they know, Chief set the stage for things to come.

Though Krista says she had no intention of adopting a pet, when they brought back Big Galoo on the second night, “he just fit right in.” Big Galoo was so mellow and great with the kids, she sent a photo to her husband. They decided to bring him home.

Similarly, Melissa’s husband, Rich, didn’t want a new dog. A chaperone on the trip, he was adamant that they wouldn’t fall in love and bring somebody home. But when they met Keira, Melissa says it was like a movie. “My husband and this dog laid eyes on each other and just imprinted — and that was it.” After the sleepover, he had to convince Melissa that they should, in fact, adopt Keira. Success!

Spreading the word about their trip to help animals

The magic continued upon their return home. Another youth group member convinced his family to adopt two dogs from the local humane society. But it doesn’t end there.

Members of the congregation wanted to learn more. So the youth group was tasked with delivering two sermons about their trip. Though such public speaking would have normally terrified the kids, they all were so eager to share the experience with others that they were filled with a newfound confidence.

In fact, their presentations were such a hit, new members of the youth group want to return to Best Friends — and they don’t want to wait another three years. They want to return next spring, so they’re starting to plan a fundraiser now. Good luck, kids. We hope to see you soon.