Bodie knows when it’s training time. The large rabbit’s ears perk up as he watches Bunny House caregiver Heather Hokanson enter his room carrying a clicker and a handful of his favorite treats. Then he starts bobbing his head in excitement as he hops over to her and puts his front feet up on her leg as if to say, “What tricks can I learn today?” 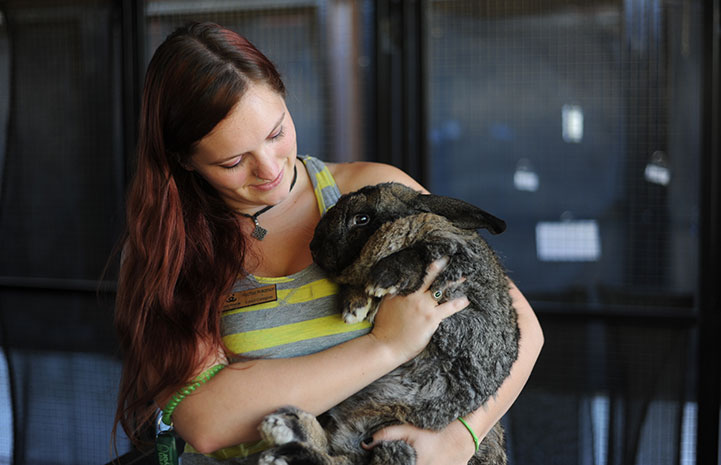 Two-year-old Bodie wasn’t always this excited to see people. He and his friend and roommate, Jane, were originally rescued from a bad situation. The two bunnies went to a rabbit rescue group in Idaho before coming to Best Friends together. They arrived at the Bunny House shy and unsure about people.

The training sessions are helping Bodie turn that around. How so? He’s building confidence and forming relationships with his caregivers. Learning to trust people will make his life at the Bunny House more fun and less stressful. The tricks he learns will also help him impress potential adopters so that, someday, the right person will fall in love with him. That’s important because Bodie is a Flemish giant, a big bunny breed, and they sometimes have a harder time finding homes than other rabbit breeds because of their large size.

Learning in leaps and bounds

At 12 pounds, Bodie may look like a huge bunny to some people. But he’s pretty small for his breed. He’s also smart and eager to learn some fun rabbit tricks. Training time is his favorite time of day, and he looks forward to the sessions. Caregivers keep them short (about five minutes each) to keep Bodie engaged and focused. Since he started working with his caregivers, he’s coming along in leaps and bounds. The little pieces of dehydrated carrots that Heather doles out as treats really motivate him.

So far, Bodie has perfected his “sit pretty” pose. He’ll stand up on his hind legs with his front legs tucked up against his chest and his nose twitching. He looks as if he’s begging for a treat, but he won’t get one until he holds the pose for a few seconds. Then Heather will click the clicker to let Bodie know he’s done a good job and hand him a treat. “He’s a champion at it now,” Heather says.

Learn more about how to train a bunny 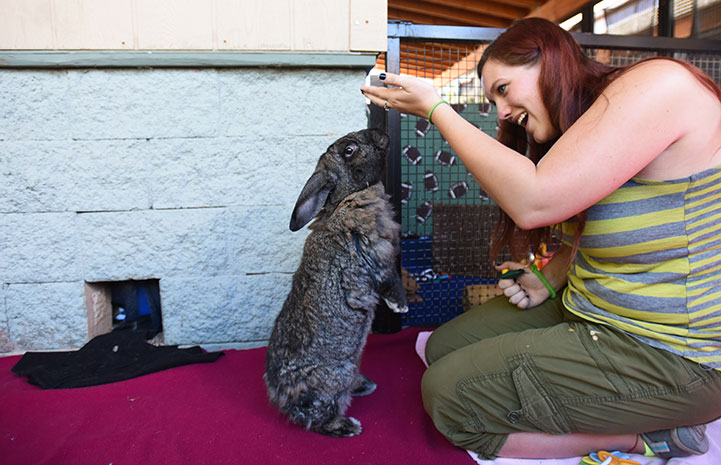 Bodie has also learned to hand-target, which simply means touching his nose to Heather’s hand when she holds it out and says “touch.” It’s a simple exercise that can be used as a foundation for bigger and more exciting tricks in the future.

Right now, “spin” is the top trick on Bodie’s list. Heather shows him a tiny piece of carrot and moves it in a circle just above his head. Keeping the carrot in sight, Bodie moves his body around in a circle until he can reach it. Eventually, he’ll be able to spin in a circle when he sees his caregiver simply twirl her finger in the air.

The best thing about training time

It will take a few more training sessions to get there. But there’s no rush, because the training sessions are more about helping Bodie build trust. In spite of his difficult past, he has really opened up. He’s even helping his pal Jane do the same. She watched him and Heather working together and decided to try a few of the same moves — a brave first step since she is more shy than Bodie. Now, she’s getting training sessions, too.

These days, it’s hard for Bodie to contain his excitement. A curious but cautious guy at first, he’s now a truly exuberant bunny who loves to learn from people. And that’s been the best thing about training time. 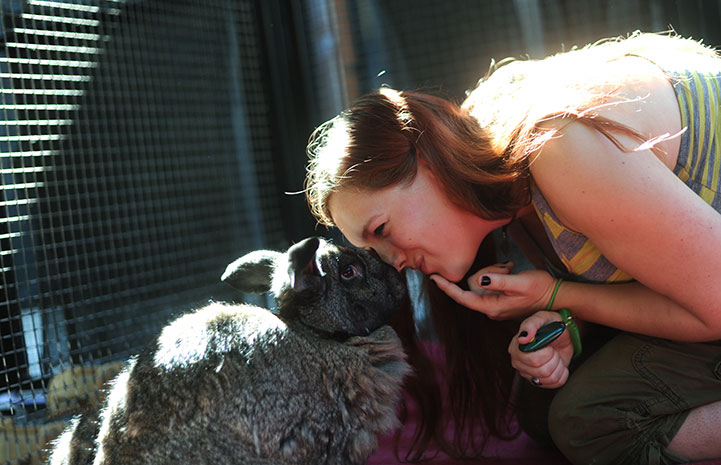