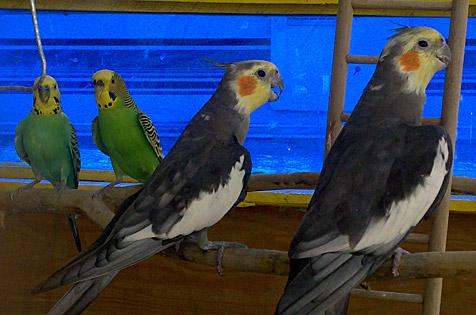 Mitch the cockatiel certainly has something to sing about. He’s the Julio Iglesias of the feathered world, not only because of his musical performances, but also because he’s a lover.

However, he’s not the only one in his new family who has loads of love in his heart.

April Galinski and her husband, Joe, recently adopted Mitch, along with 10 of his closest friends. That’s a lot of love. It is no surprise, though, that this adoption has been a decade-long ambition for April. 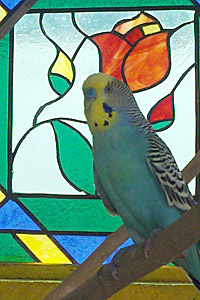 All the colors of a rainbow

For years, she has been collecting materials and talking with Best Friends staff, with the intent of building an outdoor aviary. But chilly weather and parenting responsibilities pushed her dream to the side … temporarily.

Now with a new home in St. George, Utah, and her stepchildren moved out, at long last this empty-nester had the opportunity to provide a true nest for birds in need. So she and her husband got to work building her aviary. And not just any old aviary — this one is complete with a bush, stained-glass windows and even a turtle in an enclosed pond!

Once the 12 x 15–foot enclosure was complete, the only question was, who would live in it?

It didn’t matter to April. She told Jacquie Johnson, the head of Best Friends’ Parrot Garden, she’d take whoever needed a home.

That turned out to be four cockatiels and seven budgies, also known as parakeets. Almost a dozen new friends suit April just fine. 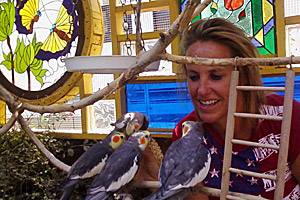 "It’s a different stage of life where we can finally do the things we want to do, and that’s care for these birds," says April. "I love them. They are my kids."

She says caring for 11 birds is no more difficult than one — in fact, she says it’s 11 times the fun. Plus, with so many feathered friends interacting with one another, she is seeing their personalities emerge.

Though Mitch is paired up with a mate, he’s an equal opportunity crooner and will sing to anyone. "He’s so endearing and charming, and the sweetest little guy," says April. "He’s just a lover." However, now he’s taking his act national. 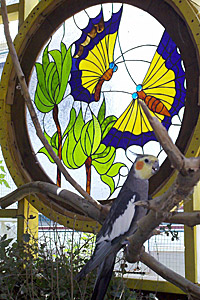 Man, that boy can sing!

Since April works from home, she attends staff meetings via phone from her patio. Mitch gives a whole new meaning to the term "work performance." When he starts singing, he provides a welcome distraction from the day-to-day grind — and her co-workers don’t even have to purchase tickets.

However, his solo act seems to be coming to an end. Just the other day, April thought she heard Mitch singing from the bush in the aviary, so she decided to whistle back. Boy was she surprised when Mitch responded — from up on a perch. Mitch’s star quality seems to be rubbing off on one of his pals.

And everyone gets in on the act when the misters are turned on. When the cool spray of water hits the flock, they all start singing and chirping. April says it’s like turning on a symphony.

So watch out Vegas — there may be a new show coming to town.

Learn what makes an appropriate and safe living environment for parrots.