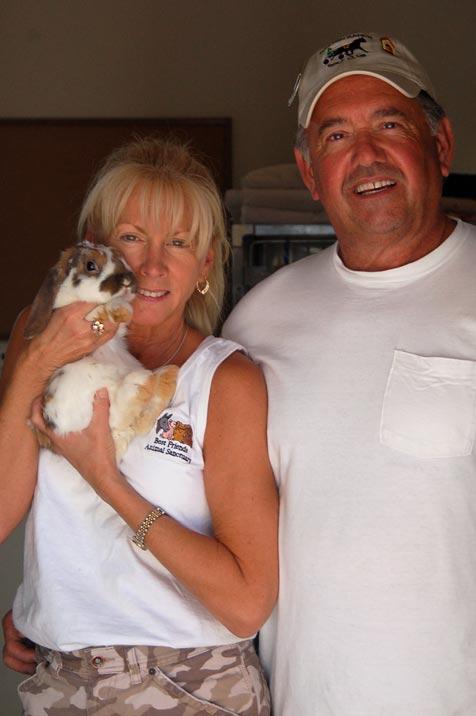 If you visit the home of Mike and Linda Bobniz, you’ll find an oil painting of Traveler, a very special rabbit, hanging on the wall. Mike and Linda adopted Traveler from Best Friends a year and a half ago. They loved this guy to no end. In fact, they compare finding him to finding a three-carat diamond. And though he was a young rabbit when they adopted him, Traveler recently passed on. He had fluid around his heart, a genetic problem that they could never have known about or prepared for. They were devastated.

At first, Mike suggested to Linda that perhaps they should take a vacation. Hawaii, he proposed. Anything to distract themselves from the empty house where a playful rabbit once raced up and down the stairs. In the end, though, neither of them really felt like going to Hawaii. Sand and surf wasn’t what they needed. Instead, they made plans to visit the one place they return every year for vacation: Best Friends.

Before coming to the sanctuary, however, they adopted a local baby lop named Spencer. Traveler had been an only pet, and they wanted a new rabbit in their lives. When they came to Best Friends, they found another baby lop rabbit whom they fell for instantly. His name is Conner. This time, they figured, they’d give their rabbit a friend.

You never know what might happen when you introduce two animals. Their vet thought two young, neutered male rabbits would get along. But after a brief period of mutual tolerance, Conner and Spencer became fast enemies. Mike and Linda began to wonder if they’d have to give one up. "Which one?" they’d ask each other. The answer was always the same. Neither. They adore these rabbits and if it takes building a brick dividing wall up the middle of the house to keep the peace, they’ll do it. In the meantime, they limit the amount of time these two guys are allowed near each other—usually 15 minutes a day—and they plan to consult a behavior specialist.

Despite the scuffles, both rabbits are playful on their own. They keep Mike and Linda laughing all day long, which is nothing short of a miracle, considering how empty their lives felt not so long ago. It’s easy to imagine the Traveler in the oil painting smiling down on the scene.

Learn about bunnies as pets.