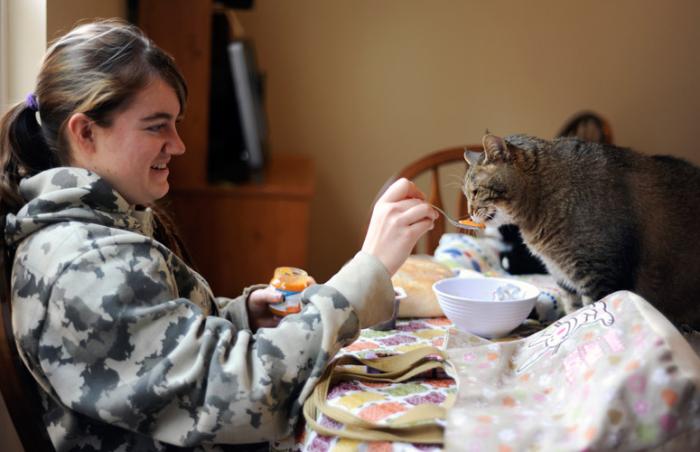 The buzz started when Tigger first arrived at the Sanctuary. From the moment he stepped out of his travel crate, caregivers, including Heather Henley, were completely taken by him. “You just have to meet him,” she exclaims.

Tigger hails from Wyoming, where a Good Samaritan rescued him from someone who was threatening to shoot him just because he didn’t want him anymore. Thankfully, the rescuer succeeded in saving his life, but she could neither keep Tigger, nor find a shelter or rescue organization that could take him. So he came to the Sanctuary, where he instantly became all the rage.

Just one cross-eyed look from a cat 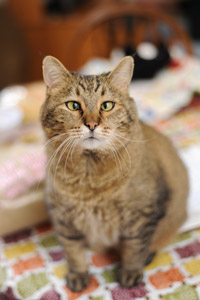 Seven-year-old Tigger can reel most people in with just one cross-eyed glance. Caregiver Barbara Heydolph calls him a “cross-eyed beauty.” She’s not the only one who thinks this unusual quality makes him all the more adorable. He may seem, from a distance, like an ordinary black and brown cat with tabby markings on his face and tail. But that’s only until he comes up to greet someone, or rolls over for a belly rub – which for some reason makes his eyes cross even more.

Though he’s generally a mellow, easygoing cat, Tigger can be a big goofball when he wants to be. He loves to play with catnip and will beg for it. And he’s frisky like a kitten at times, running around the room with his toys, and sometimes bringing them to people with whom he wants to play. He loves to be the center of attention, and people are his favorite companions. In Sinjin’s, the building in Cat World where he now lives, his favorite spot is a blanket-covered chair near the computer station, where he can be close to caregivers and volunteers.

No more lounging around

Tigger, however, is guilty of doing a little too much of hanging out himself. He arrived at Best Friends overweight at 17 pounds. That’s why he’s at Sinjin’s, home of the Biggest Winner’s Club cats – those who need to do some dieting and exercise to get down to their ideal weights (which for Tigger is 13 pounds). Tigger wasn’t too keen on exercise in the beginning. His caregivers joked that his exercise routine involved him lounging around and lifting his head up every once in a while. But he recently went for his first walk – on a harness and a leash – and did remarkably well.

Tigger still has about a pound and a half to lose to reach his ideal body weight. But the walks will certainly help. And his caregivers will continue to monitor his food and caloric intake very carefully – especially because Tigger has made himself the official taste tester for all the other cats in the building. At dinnertime, he’s front and center, making certain that their diet food is palatable.

Though his caregivers often have to separate him from the other cats so that they can eat their meals in peace, these antics earn Tigger even more admiration than he received initially. “He has charisma,” says Barbara. “People always have the same reaction to him. You just can't meet him without wanting everyone else to meet him."

Learn more about Tigger and other adoptable cats at the Sanctuary.