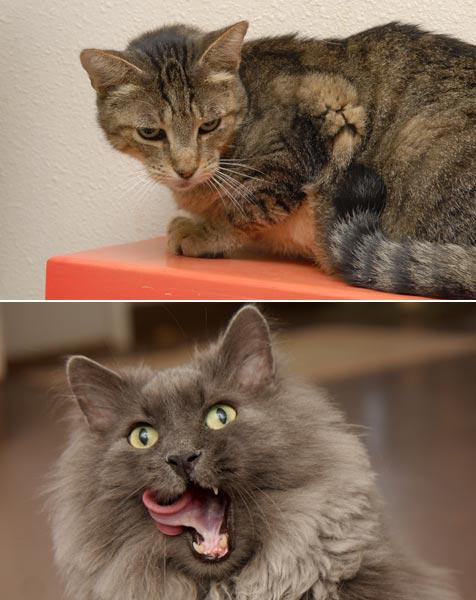 So many things are heroic about Sir Grayson Pussycat. For one, he was a survivor from the Great Kitty Rescue, in which Best Friends helped hundreds of neglected and hoarded cats to safety. And he came through it unscarred, without a care in the world. In fact, he was such a happy guy, even from the very beginning, that he ended up as self-appointed greeter for the whole rescue operation.

Whenever Best Friends staff or visitors would hustle through the buildings, with all the zillion things they had to do with that number of cats to care for, there was Grayson with a ready smile and a quick hello.

Then he moved up in the world and became the greeter at Best Friends Cat World headquarters, right here at the sanctuary. Perfect guy for the job, right? And so he is. He makes everybody feel welcome. Surely that’s heroic in itself, but there’s an even better reason to give this guy a medal. For the second time now, he has helped save a life by being a blood donor.

Puck is a diabetic cat with two loves in life: people and high places. Maybe that seems like a strange mix, a people-friendly cat who likes to hang out in the rafters of the cat rooms, but it suits him just fine. Only problem was that the caregivers were having a hard time treating his diabetes. So, they decided to move him to a lobby, where they wouldn’t have to catch him all the time.

Something happened during the move, though. Puck’s health took a nose dive and he became severely anemic. He needed a blood donation fast.

Enter Grayson. Another near-heroic thing about this fellow is how much of him there is to love. No counting carbs for this boy! He has enough body mass to make him a good candidate for blood donation. And so, for the second time since coming to the sanctuary, he donated blood to another cat. Puck is now on the mend, and should soon be in his new play area, where caregivers can keep a close eye on him. Grayson, meanwhile, is trying to duck the paparazzi long enough to find a bite to eat. Hey, fame comes with a price, right?

Read a story about a blood donor dog.