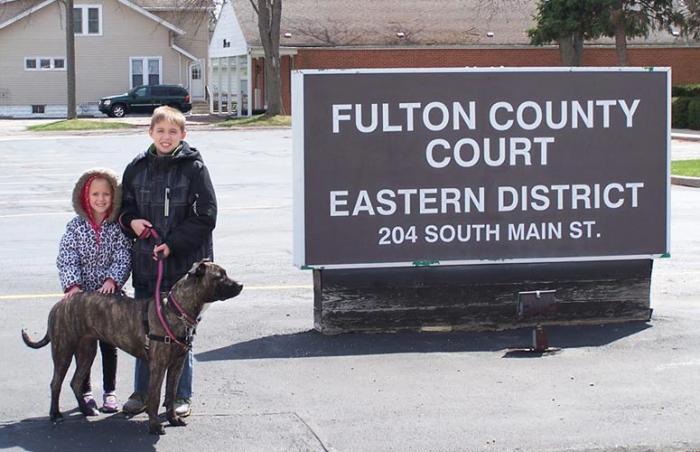 Bailey the dog is everything Tim Bork ever wanted for his family in a pet. When everyone comes home, Bailey is so excited to see family members that, with her tail rotating like a helicopter, she can’t even walk straight.

The sweet, brindle dog with the boxy head was picked up as a stray and transferred to a rescue group. Once the Borks laid eyes on her, they decided she was perfect. Bailey is great with Tim’s young kids and he loves to watch them all play together. However, there was a glitch – breed-discriminatory legislation (BDL). For dogs resembling pit bull terrier mixes, like Bailey, certain communities that still have breed-discriminatory laws – like the one in the village of Swanton in Fulton County, Ohio – can spell disaster for even the most responsible families. 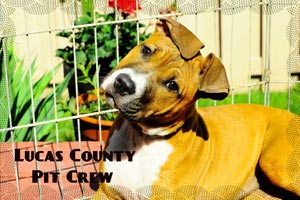 Ohio has made great strides in recent years to improve the way pit bull terriers are treated.  A major milestone occurred in 2012 when the legislature passed House Bill 14, repealing a law that, up to that point, gave Ohio the distinction of being the only state in the nation to brand a particular breed of dog “vicious.” Best Friends was instrumental in getting new pro-safety legislation passed, and ever since has continued to work to ensure that Ohio’s local municipalities don’t unfairly target dogs by breed.

Ledy VanKavage, senior legislative attorney at Best Friends, says that while HB 14 eliminated the statute and instituted a new, statewide dangerous/vicious dog law based solely on behavior, cities in Ohio, nevertheless, still can implement BDL at the local level. “Most cities have repealed their breed-discriminatory provisions and are now following the state statute,” she says. But not all.

Fulton County still has breed restrictions on the books and requires people to register as “vicious” any dog even resembling a pit bull terrier. Enforcement of this statute isn’t rigorous, so Tim was shocked when authorities showed up at his door. Because registering a dog as “vicious” can have legal ramifications, Tim understandably had decided against it.

Working together for at-risk dogs

Because Ohio has been a hotbed for pit bull terrier issues, Best Friends pit bull terrier initiatives staff members have collaborated many times with local advocates in Ohio, among them Jean Keating, leader of the Ohio Coalition of Dog Advocates and the Lucas County Pit Crew. When Jean, a longtime pit bull terrier advocate, heard about the Bork family’s situation, she advised them on how they could ensure Bailey’s safety in spite of the breed restrictions.

As Jean describes it: “[The Borks] got Bailey into a Canine Good Citizen program so they could get insurance.”

Two months after the incident with the dog warden, the Borks thought the ordeal was over – that is, until authorities showed up again, this time to seize Bailey. After the Borks exercised their legal right to refuse to relinquish their dog, Jean went to work on getting an experienced lawyer on the case. But there was a catch. “This poor family with two young kids couldn’t afford the legal fees,” says Jean.

The case was pivotal for the future of dogs in Ohio, where so much work had already been done to remove the stigma on pit bull terriers. So Best Friends stepped up to help cover legal fees and protect Bailey and her family. After almost a year of trying, authorities (not surprisingly) were unable to prove Bailey was vicious. The court dismissed the case and the family stayed together.

It was a key victory for dogs and the people who love them. As for the future, Ledy says, “We need to continue to see beyond stereotypes to Save Them All.” Jean was thrilled as well. She says, “I can never (emphasize enough) how many lives, just like Bailey’s, have been saved through collaboration with Best Friends.”