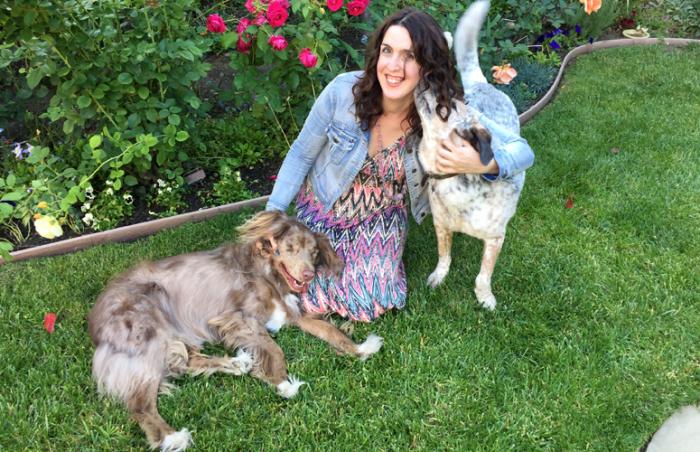 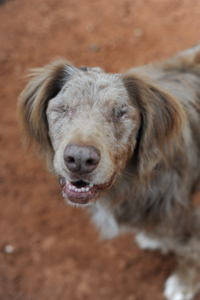 Two years ago, Calvin wasn’t yet the friendly, loving, inspiring dog he is today. Wary and withdrawn around people, he could be downright grumpy with other dogs. Calvin wanted to be left alone, and he wasn’t shy about letting people know it, even if that meant running away from them.

Before he came to Best Friends, Calvin hit a low point. He was adopted from a shelter, but was returned a few months later. On top of being homeless, he’d been fearful and defensive in the home and now had a bad reputation to overcome. But the people who spent time with Calvin knew the truth: he wasn’t an unfriendly dog. He was a misunderstood one. Something was making Calvin uncomfortable and causing him to react poorly in certain situations.

As soon as Calvin came to the Sanctuary, Dogtown caregivers began working to draw out the sweet, loving dog inside of the frightened shell he showed the world. At first, Calvin didn’t trust his caregivers to keep him safe, and he wouldn’t walk on a leash. Instead, he’d flatten himself to the ground like a pancake, expecting something scary to jump out at him at any moment. If other dogs got too close, Calvin would snap at them. However, he wasn’t acting out because he didn’t want company or attention; he was in self-protective mode because he was in pain and couldn’t see well.

Best Friends vets discovered that Calvin had a severe dry eye condition that required intensive care. For nearly a year, Sanctuary vets and caregivers gave him a regimen of medical treatments, doing everything they could to save his fading vision and to keep him comfortable. But Calvin’s eyes kept getting worse.

Although Calvin’s caregivers were concerned that a surgery to remove Calvin’s eyes would make the shy dog even more frightened of the world, it was Calvin’s only chance to live a pain-free life.

They needn’t have worried. Once Calvin had the surgery, something amazing happened. “I’ve taken care of a bunch of dogs who’ve lost their eyes,” says Dogtown caregiver Erin Schmitz, “but I've never seen anything like Calvin. He became a different dog after his surgery. He lost all his fears along with his eyes.”

As Calvin recovered, his caregivers rallied around him, and his real personality emerged. He lost his shyness and became much friendlier and more outgoing. He’d trot right on up to visitors, with his tail wagging and a big smile on his sweet face. And he was no longer defensive around other dogs. 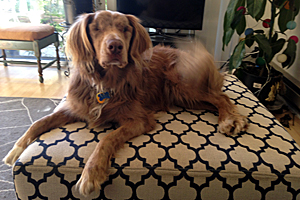 As soon as Calvin had recovered, Elly Walsh, who’d previously adopted another Sanctuary dog, opened her heart and home to him. The moment Calvin got there, he hopped right up next to Elly on the couch and cuddled like he'd been there forever.

Since going home, he’s also formed a special bond with Elly’s other dog, Oliver. “Oliver is so patient when Calvin runs into him or accidentally walks over him,” says Elly, “and he also helps Calvin find his way around.” But Calvin knows that friendship is a two-way street, so he’s helping Oliver be more confident with new people and places.

Calvin may have lost his eyesight, but he’s finally seeing how wonderful life can be, and showing the world how wonderful he is, too. Elly says, “Calvin is such an amazing testament to adopting what most people would consider a special-needs dog and really demonstrates that these dogs help humans probably more than we help them!”

Photos by Best Friends staff and courtesy of Elly Walsh