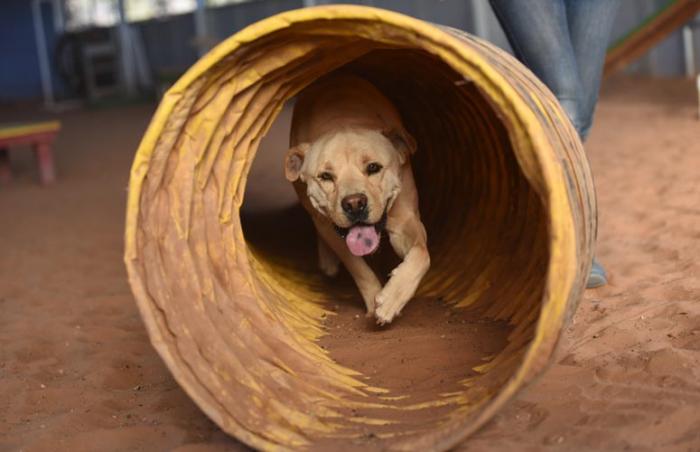 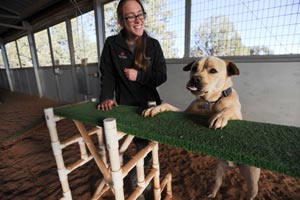 To say Tig the dog was a handful when he first arrived in Dogtown would be an understatement. It wasn’t that he didn’t want to go for walks, listen to his caregivers or learn new things — he just couldn’t.

Dog overcome by fear or excitement

The challenge was that everything around him was either unbearably scary or irresistibly exciting. He was more than merely distracted. He’d get so zoned in on certain things in his environment that he’d become practically deaf to anything else, including whoever was attempting to walk him.

It’s no fun to be either scared or obsessed nearly all the time, so caregivers worked on a plan of action to help Tig.

Dogtown caregiver Danielle Larkin explains that Sanctuary trainers began using Canine Life and Social Skills (CLASS), a training program that uses positive reinforcement to teach good manners to dogs like Tig. Walking him through the training program, which emphasizes consistency, repetition and staying positive, has been a long road, Danielle says. But the journey has been totally worth it. Tig is fast becoming a CLASS act. 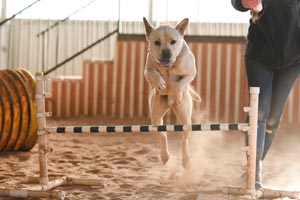 While he’d still enjoy chasing a lizard or two if given the chance, Tig has learned the most important thing for a dog facing his kind of challenges — impulse control. He’s learned all the basic cues and some fun tricks too — like hitting a buzzer and targeting objects (touching his nose to them when asked). He’s even become great at agility.

All of Tig’s training is targeted toward gaining and maintaining his attention. Regarding his agility training, Danielle explains, “He does really well with it once you get his attention. Once you have that, he is the most willing dog! He’s really smart and he loves people, too.”

The more Tig is engaged in activities that help increase his focus, the happier he is. He’s come to the point where he looks forward to his walks with volunteers, who often comment on how amazing he is on the trails that run through Dogtown. “People don’t believe me when I tell them how he used to be on a leash,” says Danielle, laughing. “He’s made a complete turnaround and we are all proud of him. And he still has so much potential.”