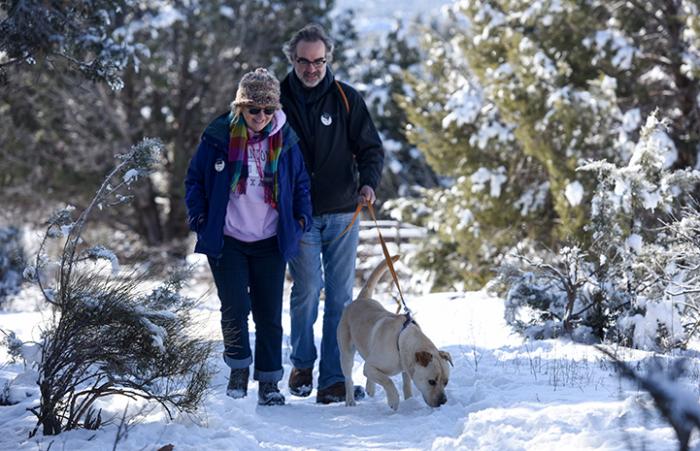 When the Best Friends Pet Adoption and Spay/Neuter Center opened its doors in Los Angeles four years ago, Layne Dicker and Sally Spencer were among the first people to walk through them. As longtime Best Friends members, the couple was excited at the idea of volunteering hands-on with dogs, right in their own backyard. They couldn’t wait to dig in and start doing some heavy-duty dog volunteer work. Little did they know that they’d be following some of that work at the Sanctuary.

Besides the basic dog shelter volunteer work of cleaning and walking dogs, Sally and Layne committed to fostering at least one litter of kittens every summer, as well as doing some pretty impressive fundraising at Best Friends’ annual Strut Your Mutt event. They also seized the opportunity to learn everything they could about dog behavior, which is one of the perks of volunteering at the center. Volunteers are welcome to join staff for special classes about dog training, which leads to many more skilled people available to help dogs at the center.  Layne and Sally took training classes and worked with Best Friends staff to learn all they could. Then, Layne stepped up to assist with dog play groups, and the couple found their niche.

The power of dog play groups

Play groups at the Best Friends center in L.A. are a big part of keeping dogs healthy and happy until they are adopted. Play groups can range in size from two to five dogs. Each group has a different dynamic based on the unique combination of dogs in it. But the one thing they have in common is that group play gives all of the dogs a wonderful opportunity to socialize and to get some exercise. And volunteers like Layne and Sally help make them possible.

“We’ve seen dogs make amazing progress in play groups, with both people and other dogs,” Layne explains. Healthy group interactions boost dogs’ confidence and build crucial socialization skills that can help them get adopted. They also give caregivers more information about the dogs that can be shared with potential adopters.

In spite of incredibly busy careers (Layne is a financial manager and Sally is a college professor), the couple spends every weekend working with the dogs. With Sally’s assistance, Layne runs several play group sessions on Saturdays and Sundays. And in addition to all that, they also make time to come to the Sanctuary in Utah to volunteer in Dogtown three times a year. And while the trip means many more hours of volunteering, the couple can’t get enough of it. 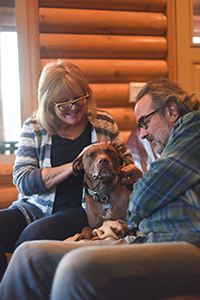 Breaking away from their busy lives may not be easy, but for Sally and Layne it’s necessary. Not only are they in love with the natural beauty of the Sanctuary, which “feeds your soul,” they say, but they’ve also become quite fond of the dogs there. During their visits, Layne never misses a volunteer shift, and the couple has taken dogs like Yo Yo (a sweet senior who is looking for a single-pet home) on dozens of outings and sleepovers.

They’ve also made some pretty special connections, like the one they have with Scratch, a Hurricane Katrina survivor. When Scratch recently had major surgery, Layne and Sally sent him a whole case of his favorite food to help him get well.

As special as their new canine friends are to them, Layne and Sally have soft spots in their hearts for dogs they knew and worked with in L.A. who have since come to the Sanctuary for extra help. One of those dogs is Simon. The big black Lab mix did great in doggie play groups back in Los Angeles, but even so, he was having a hard time finding a home from the center. Simon is picky about his human friends and tends to guard barriers like fences and gates. But he became one of Layne’s best buddies.

A clear link between Los Angeles and the Sanctuary

Because Layne had developed a successful and close relationship with Simon in L.A., he was eager to see firsthand how he was doing at the Sanctuary. “Since coming here, Simon’s been doing lots of training and agility,” Layne explains. “He’s even learned to pick up his toys and put them in a box. His caregivers have completely bonded with him and are unbelievably devoted to him."

Though Layne sometimes misses watching Simon run and play in L.A., it’s comforting to know that he’s in such capable hands. There’s also a clear link between the work that was done at the center in Los Angeles and what’s happening in Dogtown. And stories like these keep people like Layne and Sally coming back to Best Friends and volunteering to help animals — whether it’s right in their backyard in L.A. or 500 miles away at the Sanctuary.

Get involved in helping the animals at Best Friends and beyond