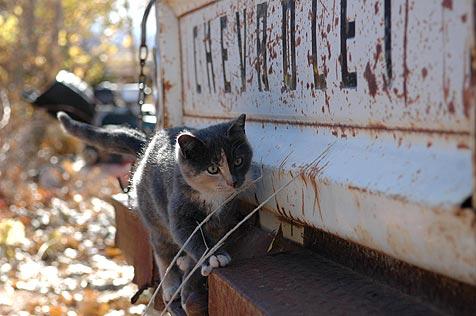 Doing away with stray cat bounty in Randolph, Iowa

Cats around Randolph, Iowa, are breathing a little easier today thanks to a Best Friends-brokered agreement that replaces the town’s notorious $5 bounty with a comprehensive program calling for the spay/neuter of all cats, not just ferals and strays.

Surrounded by a nationwide furor aroused by the town’s bounty program, Trively agreed to discuss the situation with representatives of Best Friends and the local Raccoon Valley Animal Sanctuary and Rescue.

"What made the difference was the face-to-face meeting," he says. "They presented a detailed plan that made sense for this town. The decision was a no-brainer. We look forward to a long-lasting relationship with the local [animal welfare] groups."

Julie Castle, director of community programs and services for Best Friends, called it a "win-win-win" situation: "The community is getting a humane solution to this issue, the cats get to live, and the animal welfare groups are showing that when they come together, they come up with solutions that fit the particular community and help animals."

Residents of Randolph, a town of roughly 200 people, were concerned about the risk of disease, as well as the fact that free-roaming cats were competing with their pets for food and, in some instances, were attacking family pets. Trively took action after hearing of threats to poison or shoot the cats.

Under the bounty program, established March 1, stray cats without collars would be taken to a veterinarian in the nearby town of Sidney (Randolph has no vet clinic), where they’d be kept for a period of time. If they weren’t claimed, they would be euthanized.

Two cats were turned in under the program, which was in effect for about two weeks. One died from poisoning; the other was adopted.

Representatives of the groups met in Omaha March 17 to draft the proposal, which was discussed with the mayor and presented at a special town meeting three days later. The decision to enact the resolution was unanimous.

Details of the free-roaming cat plan

The plan calls for representatives or volunteers from the groups to "set traps, place housing and feeding stations for feral or stray cats and establish managed feral cat colonies as appropriate on public property in the town of Randolph."

Friendly stray cats will be taken to animal shelters and rescues in other towns for adoption and foster care. About a dozen cats in the downtown area who have become a nuisance will be moved to a safe location outside of town.

Vaccinations and spay/neuter surgeries on an estimated 100 cats (about 80 are feral or stray) are scheduled to be performed throughout April. The plan also calls for microchipping family cats.

In addition, there will be a workshop to train community members on how to set up and maintain a successful trap-neuter-return program.

Early estimates say it will cost at least $10,000 to pay for the plan.

Along with Best Friends and Raccoon Valley, other groups involved in the program are Feline Friendz, Animal Protection and Education, and Hearts United for Animals. Alley Cat Allies was first on the scene advocating for TNR and helping galvanize local groups.

"We have offered the mayor a solution he can live with, that the cats can live with," says John Pundzak, president of Raccoon Valley. "We are proud to partner with Best Friends."