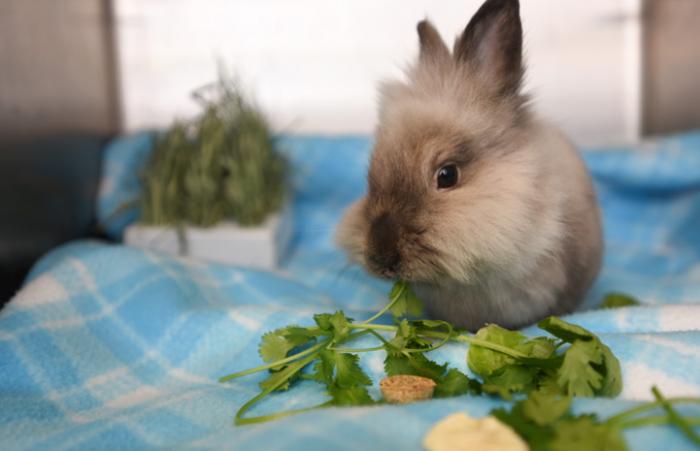 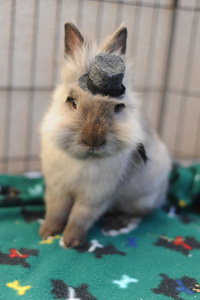 Sure, we’ve all seen bunnies being pulled from a top hat before. But have you ever seen a bunny actually wearing one? Sir Meriwether Scribbles Bunsworth the Third does.

His hat — a teeny, tiny one made of felt and complete with a matching bowtie — was designed especially for him by Sanctuary caregivers, and he wears it like nobody’s business. Along with the proper name, it’s all so fitting for a distinguished bunny like him. But Meriwether, as he is called for short, didn’t always have such a proper life. Once, he didn’t even have a place to call home.

At only six months old, Meriwether was a stray — alone and running around on the streets of Salt Lake City. And let’s face it, for a gentleman like him, the street life wasn’t exactly his forté. He was struggling to stay alive. Luckily, a good Samaritan realized that he was in trouble and brought him to a wildlife rehabilitation facility.

But Meriwether couldn’t stay there because he’s not one of our wild friends. He’s a “designer” domestic bunny — a dwarf Lionhead, bred specifically for the pet industry. Sadly, many designer pets (including dwarf Lionhead rabbits) are prone to physical issues, including ear and tooth problems. 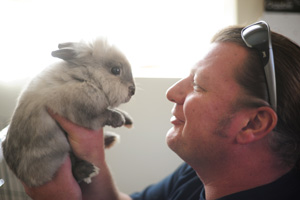 One of Meriwether’s ears was certainly bothering him when he first came to the Bunny House. He was also a bit underweight, since there’s not much on the city streets for a hungry bunny to eat. But at Best Friends, Meriwether is getting the treatment he needs to feel his best again. Besides trips to the Best Friends Animal Clinic to get help with his ear, he’s eating a special, nutrient-rich diet that is helping him bulk up just in time for the cold winter months.

Once he’s healthy again, Meriwether is likely to get scooped up quickly. Besides being irresistibly cute, he’s curious about people and will hop right up to say hello to new friends. He’ll even stand up on his hind legs, with his little nose twitching, while he waits to see if those new friends produce some bunny treats.

Best of all, when he’s feeling particularly formal, he’ll don that hat and bowtie, just like a proper gentleman. With a name like Sir Meriwether Scribbles Bunsworth the Third (no less), being dignified sort of comes with the territory.