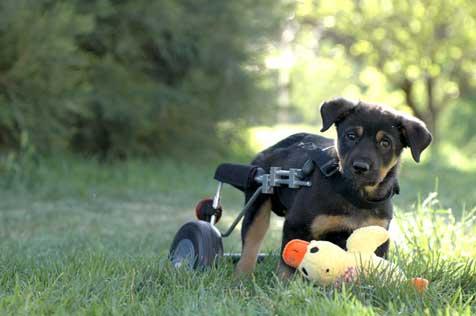 The online auction and shopping website eBay has chosen Best Friends as one of three nonprofit groups to benefit from its new Community Gives campaign, which aims to "create good in the world by inspiring people to contribute together to causes that matter."

Through its eBay Foundation, eBay will initially donate $1 million to be divided equally among the three groups. The others are First Book, which gives children from low-income families the opportunity to read and own their first new books, and Oxfam, the international relief and development organization that creates lasting solutions to poverty.

"While these organizations differ widely in their missions and activities, they share a strong, enduring commitment to making the world a better place," eBay says on its website.

To choose the organizations, the foundation asked eBay users about their favorite charities. Debbie McCullough, grants manager for Best Friends, says one of eBay’s big supporters (who remains anonymous) recommended us. Best Friends and several other animal welfare groups were invited to submit proposals. Following a review of the proposals and several phone conversations, foundation officials selected Best Friends.

The factors considered, according to eBay, included the organizations’ "history and accomplishments, their fiscal responsibility and strength, their impact on issues, and their rankings on public charity standards. First Book, Best Friends Animal Society, and Oxfam easily meet and exceed all of these criteria."

In addition to the $333,333 in seed money, eBay also is asking its members to contribute to the campaign, and will add $1 for each person who donates, with a cap of $100,000. Those funds also will be divided equally among the three organizations. The campaign runs through June 21. In addition, eBay will match donations by its employees up to $500 per person.

The money coming to Best Friends is earmarked for a puppy care center planned for our sanctuary in southern Utah. The center, in the planning stages for some time, would feature a "puppy preschool" where homeless pups will be trained and socialized to make it easier for them to join their forever families. It will include a separate admissions building and a playground.

Best Friends’ current puppy area is small, which limits how many dogs we can accept, and is partially outdoor space, where the weather can limit the time spent socializing and training.

Half the money from eBay is being provided immediately. It is to be used to pay for architects, engineers and permits for the puppy care center. The other half comes when we break ground on the project.

Founded in 1995, eBay established its foundation three years later as a way to give back. The foundation actively works to improve the social and economic well-being of local communities by funding nonprofit organizations and supporting community involvement by eBay employees. Since its inception, the eBay Foundation has contributed more than $16 million to nonprofit organizations.

The Hush Puppies shoe company is also conducting a fundraising campaign for the puppy preschool as part of its year-long celebration of its golden anniversary.

The work of Best Friends – with puppies and all the animals across the sanctuary – is possible only because of your generous support. Click here to help us reach our goal of No More Homeless Pets.