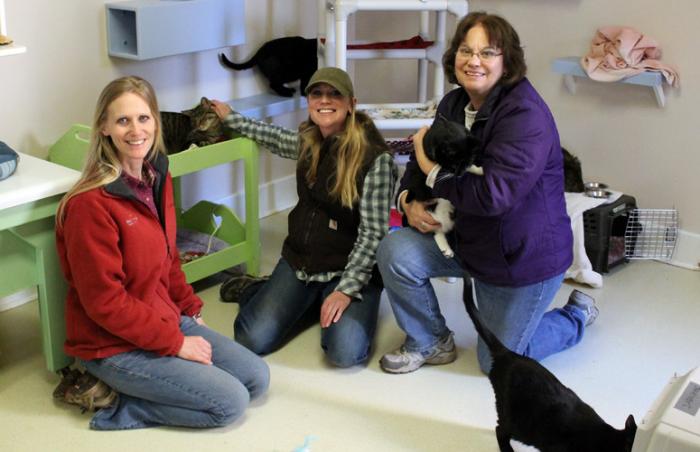 The bond between sisters can be very strong. But when you add in animals and mom, it can get even better, as Erika Kuc, Katy Jordan, and Linda Schiele recently experienced at the Sanctuary.

Erika first heard about Best Friends five years ago from a friend at work. An animal lover, Erika filed the information away. However, when her sister Katy’s cat passed away in 2010, she remembered what her friend had said – the Sanctuary was a place of healing. So the pair left Montana to spend a week volunteering. Not only did it help mend Katy’s broken heart, they fell in love with the animals, caregivers and atmosphere. Since then, they have returned together annually, and Erika has even brought a friend and her husband. But this year, they shared the experience with their mother, Linda.

“After hearing wonderful things about Best Friends for years, she finally decided she wanted to come,” says Katy. 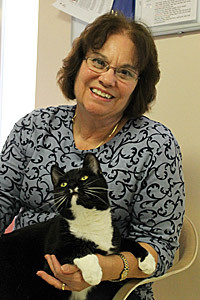 Cat adoption that was meant to be

Excited to share Best Friends with their mom, the sisters brought Linda to Benton’s House to volunteer. Benton’s House is a building that houses many special-needs cats. Almost immediately, a cat named Braveheart jumped into Linda’s lap, played with her nametag, and really turned on the charm.

“He seemed to be just crazy about her,” says Erika. “He was so drawn to her.” And that feeling was mutual. In fact, the pair connected so quickly, they hosted him for his very first sleepover that evening. Their love connection grew even stronger, and following a call to her husband, Linda decided to adopt Braveheart. “We think it was meant to be,” says Erika.

But Braveheart wasn’t the only cat to go home with that group. Erika had visited the Sanctuary last November, when she fell under Prince’s spell. However, with the holidays coming, the timing wasn’t right to adopt. Prince was adopted by another person in December, but things didn’t work out, so he came back – just in time for Erika’s recent visit. The pair fell in love all over again, but this time she sealed the deal and adopted.

Another instance of meant to be!

Dog with a sixth sense 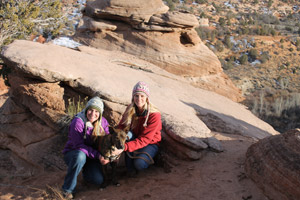 However, this trip wasn’t all about cats. The next day, Erika and Linda volunteered in Dogtown. Not surprisingly, they wanted another sleepover, so pit bull terrier mix Fernando was selected. After picking him up, they all went out on a hike and Linda uncharacteristically lagged behind.

“Even though he was really excited to get out and walk, Fernando kept turning around and looking at mom and waiting for her,” says Erika. It was odd, but they didn’t think much of it until that evening, when Linda experienced heart issues. Erika accompanied Linda to the hospital while Katy and Fernando remained at the cottage, the pooch comforting her as she worried. “He was just an angel for me while they were gone,” says Katy.

Thankfully, tests revealed nothing serious and Linda was discharged. Erika recalled Fernando’s actions during their walk just a few hours earlier. “We think that he sensed there was something wrong with her,” she says. Such a heroic dog didn’t go unnoticed long and Fernando has since been adopted.

Best Friends is close to their hearts

Back home, the sisters help animals when they are able to. However, both of their hearts belong to Best Friends, even from 700 miles away. They keep up to date on happenings through the Cat World Facebook page, and check the recently adopted page daily.

“We’re so happy to be in the know and a part of it, even from way up here in Montana,” says Katy.