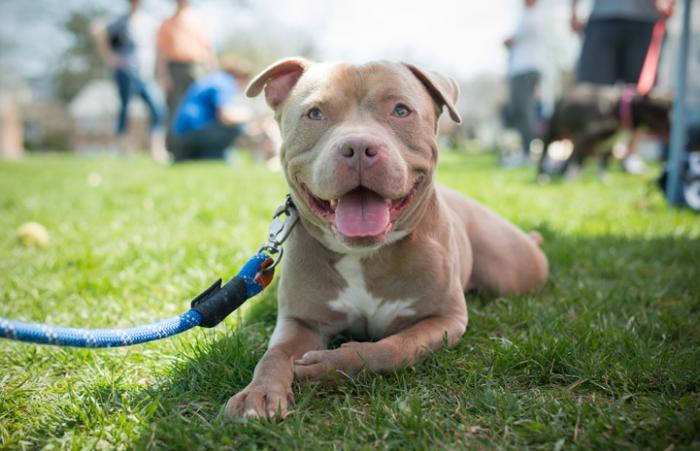 This is the second in a series highlighting a few of our favorite pet adoptions from Best Friends local programs in Los Angeles, New York City and Salt Lake City throughout 2015. The first installment featured adoption stories from the Best Friends Pet Adoption and Spay/Neuter Center in Los Angeles.

Now, we revisit adoptions that took place in 2015 through Best Friends–New York, where the sole focus has been on getting more animals into homes. Unlike our other local city programs, Best Friends has been working in New York without the benefit of a centralized location. To showcase adoptable dogs and cats, both from local rescue groups and from Animal Care Centers (ACC) of NYC, Best Friends coordinates a year-long series of adoption events — small, big and massive ones — at various locations around the city. An ever-growing network of volunteer foster families helps even more dogs and cats go from ACC into great homes. 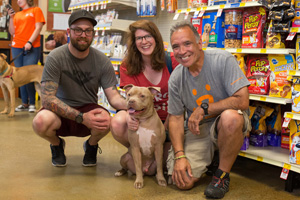 ​Porkchop, a pint-sized pit bull terrier mix with a coat the color of hot chocolate, has the kind of face you can’t help but want to squish. He looks like he has laugh lines around his mouth; indeed, you almost never see him without a grin.

Maybe it was his beaming smile that won the day. Or it could have been his whole adorable, photogenic face. Whatever it was, he captured the attention of a wonderful couple who saw his picture in Time Out New York, a publication detailing things to do and see around the city. They decided they needed to see Porkchop right away. And at the Best Friends Super Adoption event held in the spring, they officially made Porkchop part of their family.

“All our staff and lots of our volunteers were so happy and sad at the same time to see Porkchop go home. Of course, the joy outweighs missing him,” says Shannon Kirkman, Best Friends mobile adoption coordinator in New York.

But it turns out they didn’t really have to say goodbye to Porkchop for long. Shannon explains, “The great part is that he and his family live near the PetSmart in Brooklyn, where we hold our weekly Sunday adoption events, so we've actually run into him and his family several times.”

Seeing animals and their new families so happy together truly is the perfect picture. 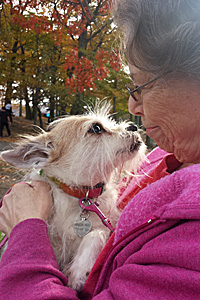 Nine-year-old Rainbow, a terrier mix, was left at ACC with a gaping wound on her precious little face. But her sunny disposition, despite the obviously painful predicament she was in, captured the hearts of Best Friends–New York staff, who were able to pull her from the shelter and get her the lifesaving surgery she needed.

Two surgeries later, she’s missing one eye and had eight teeth removed, but, as Shannon says, “Any adopter who has doubts about adopting a senior dog should see Rainbow. I've never known a happier, more playful dog — she loves squeaky toys!”

Rainbow’s new adopters, a sweet retired couple who had just lost their 20-year-old furry friend, agreed. They didn’t hesitate to adopt the mature terrier as a playmate for their remaining dog. Rainbow is now comfortable and happy in her home, and often spends her days visiting the park and basking in the sunshine. And, of course, playing with her squeaky toys.

Love often has a mind of its own. So do many Labrador retrievers. And when you put the two together, well, you get an adoption that was clearly a case of mind over matter. 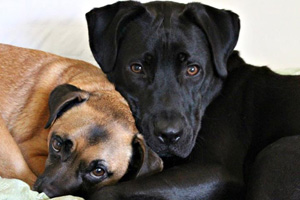 That was the situation for Christopher, a Labrador pulled from ACC by Best Friends. Christopher quickly endeared himself to Best Friends’ New York marketing manager, Amy Davila. “I fell in love with Christopher and his famous Lab hugs,” she says. “He hugs you when he sees you.”

Christopher was at a Best Friends Super Adoption over the holidays, hoping someone would want one of his big hugs every day for the rest of his life. Amy’s close friend and fellow graduate school alumna, Katie, happened to be in town for a holiday party, and decided to join Amy at the adoption event.

When Katie innocently asked who Amy’s favorite dog was, Amy happily introduced her to Christopher. Her friend wasn’t there looking for love, but it was love at first hug. The only problem? Timing. First, Christopher couldn’t exactly attend the party with Katie. He also couldn’t take the train back home with her afterward.

“When she left the adoption event,” Amy says, “she worried that Christopher would be adopted by someone else, but I told her she should leave it to destiny.”

Destiny didn’t let them down. A few weeks later, all were reunited at a Best Friends mobile adoption event and this time, Amy’s friend was prepared: She brought the car. Christopher, renamed Otis, now lives in the comfort of sprawling Hudson Valley farmland among apple orchards and green fields. 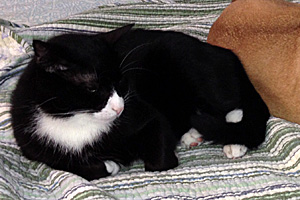 If Best Friends staff wanted to know how a new cat reacted to other kitties, they’d call on Panda. This handsome three-year-old tomcat is cool as a cucumber around all kinds of other felines, making him the perfect litmus test for kitty personalities.

Yet, oddly enough, potential adopters weren’t connecting with Panda. He was even part of a wildly successful series of eight cat adoption events at Urban Outfitters stores around the city. Still no dice. With his striking looks and easygoing nature, why was it taking so long for him to catch the eye of an adopter?

Perhaps because fate was at play on his behalf. A chance meeting between Shannon and a stranger in a vet’s office is how Panda found his home. There, Shannon met a woman heartbroken by the loss of her senior cat, and it turned out that Panda was the perfect new pet for her. In his new home Panda gets to be best buds, not with a cat, but with a pug named Sadie who had been lonely since the passing of her senior friend.

Photos courtesy of Best Friends–New York and the adopters