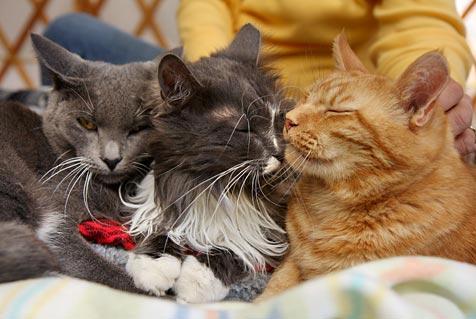 Snoopy isn’t the same cat he was only a week ago. Snoopy used to hiss and strike at caregivers whenever they approached. Now, he loves to be held. That sounds almost impossible, but it really happened. With the help of a little peer pressure, as it turns out.

Snoopy is one of the 127 cats from Pahrump who just came to Best Friends as the very last of the cats from the Great Kitty Rescue. Because of the neglect they suffered, the cats from this group have very special needs and they need lots of attention.

Well, they’re getting it! Lots and lots of attention, including sleepovers every night. Cat staffer Terri Gonzalez lives with the cats who came to the sanctuary from Pahrump. She has a bedroom in one of their yurts and everything. It’s all part of their unique socialization program. And in case you’re imagining Terri spending quiet evenings curled up with cats and reading novels, think again. After hours is when all the magic happens. And that magic takes a whole lot of work.

Terri has been working with Best Friends’ animal behavior specialist Sherry Woodard to put together the program, called Miss Sherry’s Finishing School for Felines. Here’s how a typical night goes: Terri and others will figure out which cats need to learn various skills. Then at night, Terri allows a small group of cats into her bedroom turned classroom. Some are students, others are teachers.

They help each other. For example, Snoopy used to be terrified of being petted. He really did hiss and put up an awful fuss when anybody would approach him. So Terri let him into the bedroom at night along with another cat named Carson. Carson loves pets, so he strolled right up to Terri for attention.

Snoopy was flabbergasted. "You mean she’s not going to tie your whiskers into a knot?!" After watching Carson time and again, Snoopy decided maybe he could try the petting thing once more … just to be sure he knew his position on the matter. Guess what? He was hooked. And so the cycle continues.

Snoopy has now become the teacher, but in a different subject: play time! Most of these cats have little, if any, experience with toys. Now that Snoopy has overcome many of his fears, he’s found that he loves toys. He shows other cats how to play with toys and have a good time. Many of his students can’t quite believe their eyes. At first, they don’t seem to grasp why Snoopy would expend such energy on something that isn’t food. But after they watch him enough times, curiosity gets the better of them, too.

One week is an awfully fast turnaround, and many cats will take much longer to turn the corner. The most important thing, though, is that these cats are now receiving the social training they’ve never had before. Living in survival mode, as they used to do, they missed out on a lot of the finer things in life. With Miss Sherry’s Finishing School for Felines, however, all those lessons are finally happening. And school has never been so much fun.