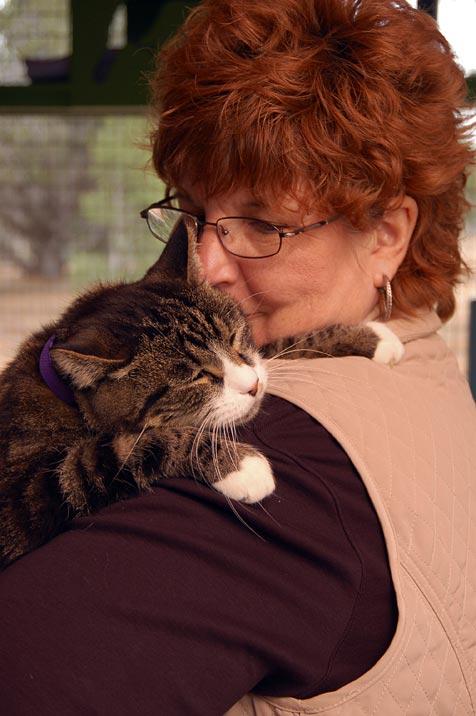 Never give up hope. For Billy the cat, a forever home seemed more like a mirage than something that could be right around the corner. He first came to Best Friends from another shelter when his number was up. You see, Billy was a feral cat, and in many shelters that’s as good as a death sentence.

Once Billy came to the sanctuary, though, he hid in the rafters for a long time. Something about those gangly, two-legged animals really puzzled him and he didn’t want anything to do with them. And then one day, for reasons that he’ll never share, Billy decided to give one caregiver a chance. Cat staffer Marilyn Spangler heard a soft meow and turned around. There was Billy, ready for affection. They formed a pretty strong friendship and, eventually, Billy became social enough to try a mobile adoption. That mobile was his first and last, and not because he was adopted.

Urinary crystals in a cat

He developed urinary crystals—a special needs situation that requires a structured diet. This condition of his scared off a lot of would-be adopters. A pretty rough break for a cat who, just when he realized he wanted a family, had a hard time convincing one to consider him.

Things went on like that for quite a while. Billy lived at the sanctuary for over five years before Nancy Cheverton of Tampa, Florida, found him on the Best Friends website. Her heart went out to him instantly. She has a cat with Billy’s same medical condition! When Nancy came out to Best Friends and met Billy, this guy knew exactly when and how to turn on the charm. He managed to wrap himself around her little finger in less time than it takes to drop a can of cat food on your toes. A happy-ever-after for a cat who couldn’t be more deserving.