With his bright blue eyes and striking markings, it’s no wonder Frankie gets a lot of attention. People are drawn to his unique looks and outgoing personality, and he loves all the attention. But for Frankie, who is both deaf and partially blind, the world can sometimes be a little overwhelming. Caregivers at Best Friends Animal Sanctuary are working with him every day, learning more and more about him and how they can help this very special dog.

Frankie came to Best Friends from one of our network partners, RSQ Dogs, where he had been a bit of a handful. When he is overexcited, he can get jumpy and mouthy, but sometimes it’s hard to tell what gets him overexcited in the first place. And communicating with him can be tricky. How do you get the attention of a dog who is deaf if he’s not looking at you? So, RSQ Dogs contacted Best Friends for help.

From the day Dogtown team lead Julie Tasch picked Frankie up, she’s made it her mission to help him. She’s taken him on various outings to learn how he reacts in different situations. “It’s just been a lot of trying things and seeing what works,” she says. “What triggers him, what doesn’t trigger him.”

[This dog with behavior challenges may not be easy, but he's totally worth it.]

For awhile, Frankie had to walk on a modified, PVC-reinforced leash, because if something happened that triggered his mouthy behavior, the first thing he did was try to chew through the leash. “It can be hard to get him to reset,” says caregiver Janna Kruse. “Sometimes what works is if you pull him closer to you and just pet him.”

Since learning that he couldn’t chew through the PVC, Frankie has graduated to a cable leash. But there are still times — seemingly at random — when he gets overstimulated and starts jumping and mouthing. “A lot of it has been trying to teach him management, not letting him practice those behaviors when we can,” says Julie.

Much of that management is finding fun things for Frankie to enjoy while keeping calm. And over time, caregivers have figured out some of his favorite activities. 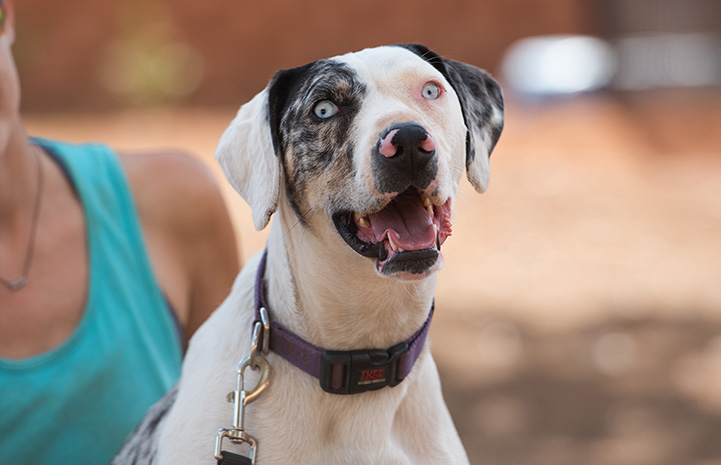 Fun for an overstimulated dog

When it comes to quality time with Frankie, the calmer the better to keep him under that threshold for troublesome behavior. He doesn’t seem to mind trading rough play with toys for good, long scratches down his back and behind his ears. He loves leaning his whole weight against his human friends, soaking up the physical contact.

“That’s the thing with jumpy-mouthy dogs,” Julie says. “They’re my favorite to work with. Usually the reason they develop those behaviors is because they love people. They’ve developed these naughty behaviors, but it’s because they want to be with people, and they love people, and now they’re expressing it in the wrong way. They tend to be very affectionate, very people-focused dogs. You just have to help teach them a different way to show that.”

Sometimes, if the folks at Dogtown feel like one of their residents could use a little being-in-a-house practice, they’ll bring a dog home for the night. The first time Julie brought Frankie to her house for a sleepover, she wasn’t sure what he would do when it was time for bed. No one knew if he’d ever slept in a home before or if it might be too exciting.

“He rolled on my bed for 15 minutes straight,” Julie recalls. “And then he slept great through the night. We cuddled. He was the little spoon. He just slept right next to me. It was really sweet.”

Frankie also does well with other dogs on supervised play dates. After meeting Julie’s own dog on hikes and the sleepover, they’ve become friends. But according to Janna, Frankie has a favorite type.

“He likes cute, playful little girl dogs,” she says. “He’s really playful but a lot of the stuff he’ll do to other dogs he doesn’t always like when other dogs do to him. He’ll live with dogs at Dogtown when we get that type in, but that type’s pretty desirable to adopters so they don’t usually stay long.”

Swimming is another favorite of Frankie’s. If there is water, he is in it. His first stop at the Best Friends dog park is the pool, and any time he goes out on a hike, there’s sure to be a body of water along the way for him to splash in. He might just swim forever if he had the chance.

[Eight dogs beat the heat in the pool] 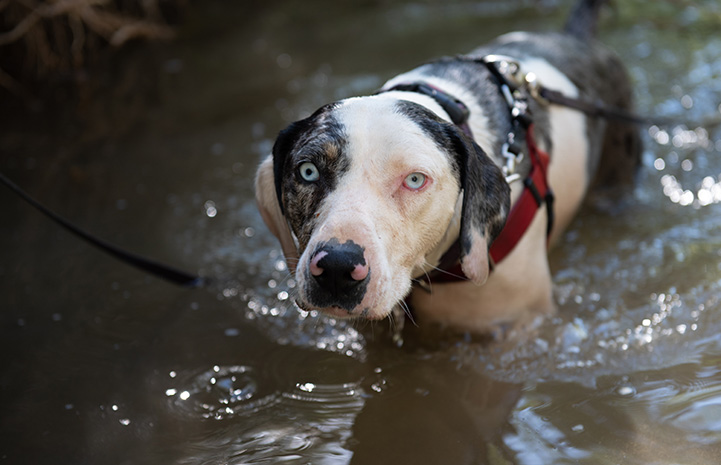 Even with all the cuddles, doggy play dates and fun in the water, Frankie can still get overstimulated and start jumping and mouthing. But there is one activity, Julie says, that never seems to trigger him ― golf cart rides around the Sanctuary.

“It’s his favorite thing. Almost every other thing I’ve done with him, he has the potential to get jumpy and mouthy, but on golf cart rides he just lies on your lap or sits close to you, calm the whole time.”

Every day, Frankie’s caregivers are learning more about him. They’re figuring out what he likes the most and what might be too stressful for him. Learning to communicate with Frankie can be a challenge, but it’s one that just makes the bond with him all the stronger. And caregivers can’t wait for him to find someone who loves him just the way he is.

Julie says their motto is “Every dog is an individual” and that Frankie is their poster child. “You can’t compare him,” she says. “There’s no dog like him.”

All the animals that come to the Sanctuary have unique stories and paths in life. Their stories are possible because of Best Friends supporters.

If you want to help a shelter dog, take one home for a sleepover.