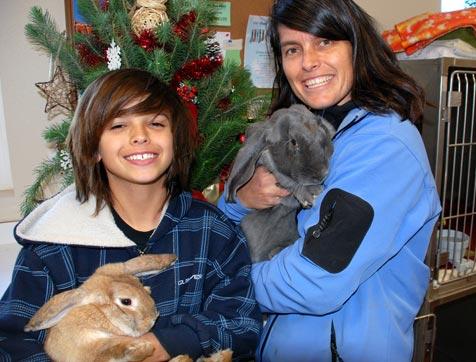 Ever have a first date that didn’t turn out so well? You’re cruising along, everything seems fine, then WHAM-O! One of you doesn’t like Barry Manilow and the whole evening crashes and burns, black smoke trailing out of the sky. Eek. Sometimes, though, it’s worth sticking it out past a Barry Manilow shocker. Perhaps there are a jillion other things you might have in common.

That’s how it worked for Pumpkin the rabbit. His first date wasn’t going all that great. A family from southern Utah brought their rabbit, a female named Lexi, to Best Friends for a visit. They felt Lexi deserved a friend and Pumpkin seemed like a great candidate. Pumpkin, so named because he’d been found in a storm wash on Thanksgiving morning, really is a sweetheart.

Only, at first, Lexi didn’t think so. She spent the morning sending snarls and sour faces in Pumpkin’s direction. She never acted aggressively or anything, but she seemed to give him the cold shoulder right from the start. The rabbit caregivers let Pumpkin and Lexi carry out their date on the medical room floor with no other rabbits around. There was always a caregiver close by to observe, and still no sparks were flying between Pumpkin and Lexi.

About six hours into the date (yup, that’s a long first date!), they turned a corner. Pumpkin must have said something brilliant because, all of a sudden, Lexi sauntered over and cuddled right up to him like they were long-lost pals. What the heck? Turns out he shmoozed just in time. Ten minutes later, Lexi’s family came by, asking for a report. That little success right at the end of the date worked wonders in the long run. Pumpkin will now be moving in with his new family!

Learn about rabbits as pets.