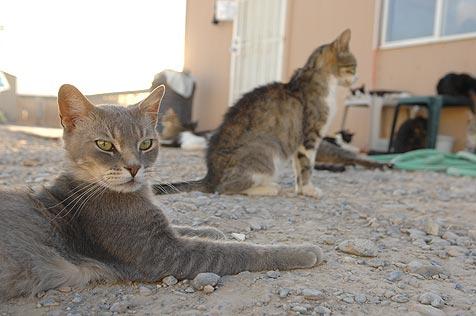 Nevada prosecutors have accused the former president of FLOCK (For the Love of Cats and Kittens) of animal cruelty, saying it was her neglect that created nightmarish conditions for more than 800 cats at the desert compound.

On March 13, the Nye County district attorney filed 13 counts of misdemeanor animal cruelty against Sharon "Sheri" Allen. The law under which she was charged prohibits anyone from depriving an animal of necessary food or drink, abandoning an animal, or engaging in an act of cruelty against an animal.

If convicted, she would face maximum penalties of up to six months in jail, 120 hours of community service, and a fine of $1,000 on each count. She is scheduled to be arraigned April 14.

Allen previously was charged with animal cruelty in the wake of the FLOCK revelations when investigators found 125 sick and malnourished animals – including 114 cats – at her home. A judge ordered them turned over to Best Friends, and we transported them to our sanctuary in southern Utah.

"It’s important to ensure that this kind of horror won’t just start up again," says Best Friends president Michael Mountain. "And a case like this can set a precedent that will encourage other local authorities to take action when they come across other hoarding situations."

Best Friends has drafted and sent to Nye County officials a model ordinance that would create a separate crime of animal hoarding, with penalties to include mental health counseling, a restriction on owning cats, and routine inspections.

"Our ordinance recognizes the unique nature of hoarding as animal abuse," says Best Friends general counsel Russ Mead. "This is not law now, but we hope Nye County will adopt an anti-hoarding ordinance."

A volunteer tipped off county officers to the inhumane conditions inside the two-acre facility in Pahrump. The compound, surrounded by a 12-foot-high fence topped with barbed wire, was inhospitable desert landscape, where the temperature often soared to 120 degrees.

Most of the cats were severely malnourished, some near death. They suffered from upper respiratory illnesses as well as ear mites, tapeworm, rotten teeth and gums, open wounds or eye infections. At least 40 died because they were so sick and weak.

"This is the worst I’ve seen in terms of animal cruelty and neglect," says Mead, who was on-site at the beginning of the rescue. "When we got there, your eyes would water from the smell of urine and feces, and there were thousands of flies in every building."

Best Friends was asked to document each cat’s condition and turn over the information, including photos, to prosecutors. At the time, district attorney Bob Beckett said that if crimes were committed, he would prosecute "to the fullest extent."

Although the cats were purported to be ferals who were trapped in the desert or brought in from the streets, Best Friends animal behavior consultant Sherry Woodard says many were simply frightened pets who behaved like feral cats because of the conditions at the compound. In fact, several were identified as missing from their families and returned.

FLOCK president Maggie Ward accused Allen, her predecessor, of mismanaging the shelter. "We didn’t know about it for a long time," Ward says, "because she wouldn’t let volunteers into the facility. She kept it locked and changed the locks every couple of weeks."

Allen denied the allegations, saying that when she resigned, the sanctuary was clean and the cats were healthy.

Nonetheless, it was left to dedicated volunteers and devoted Best Friends staffers – who slept in the cat buildings or spent weeks at a time living in RVs or tents – to clean the facility, build shady areas to protect the cats from the heat, set up a triage system and two cat hospitals, vaccinate the animals, treat infections and wounds, and transport dozens of very ill cats to area veterinarians.

All the cats have now been moved from the FLOCK compound. Thanks to a series of successful adoption events, most have gone on to forever homes, and the rest were brought to the Best Friends sanctuary for special care.

The work of Best Friends – in the Great Kitty Rescue and at our sanctuary – is possible only because of your generous support. Please consider a donation to help animals in need.