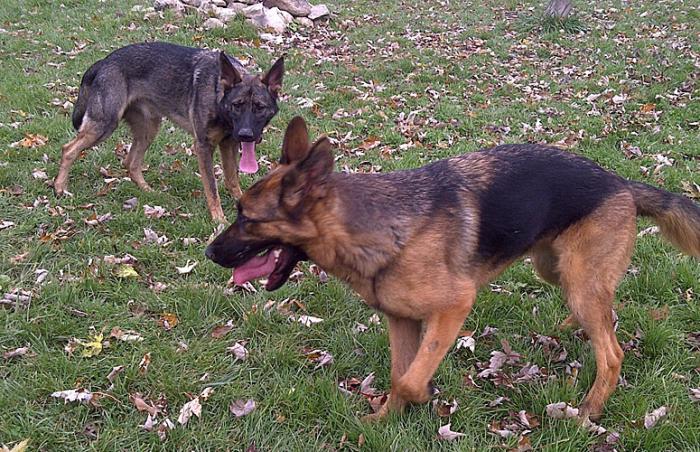 Like many pets who end up in shelters, Crash the German shepherd dog has been through a lot in his young life. He tangled with a car and ended up in a Los Angeles city shelter with a severely broken leg. Nobody stepped forward to claim him, but his outlook brightened considerably when Best Friends took him in and got him the orthopedic surgery needed to repair his leg. As he healed, it became clear he was no average dog and needed more than an average home. So who could handle Crash? 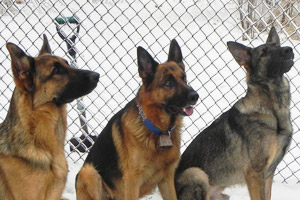 Lauralea Oliver, who oversees dog training and behavior at the Best Friends Pet Adoption and Spay/Neuter Center in Los Angeles, fostered Crash during his long recovery period after surgery. As the handsome shepherd put on weight and muscle, Lauralea noticed that he had an active mind that constantly needed something to do. She says, “He’s a lot of dog. A lot of dog.” Once Crash was healed and ready to go to a home, he began to meet potential adopters. But things didn’t go quite as planned.

Crash’s exuberance and power were impressive, but overwhelming. Lauralea says, “There was a lot of interest, but once people met him, they were like, ‘Wow. Never mind.’ He’s just really powerful; he has tons of energy and needs a lot of direction for that energy.” Crash needed adopters who would embrace his boundless energy, smarts and power and could channel them into positive activity; a walk twice a day wouldn’t be enough for Crash. A year passed, with no takers.

A new home in Canada

Meanwhile, Crash’s photo was put on Facebook, and that’s where Teresa Lewin first saw him. Teresa has been a certified dog trainer for 30 years and a K-9 handler for narcotics and bomb detection dogs for the past few years. German shepherds are her breed of choice for this work, and she happened to have an open spot in the household. She was exactly who Crash needed. But she was in Canada and Crash was in L.A.

After initial disappointment, Lauralea and Teresa thought, “Why not?” Crash deserved the best possible home, and as Lauralea says, “It just seemed like the right fit even though she was far away.” So they did it. Crash boarded a flight to Washington, D.C., and Teresa and her husband drove from Ontario to pick him up and drive him the rest of the way home.

Active life for an energetic dog 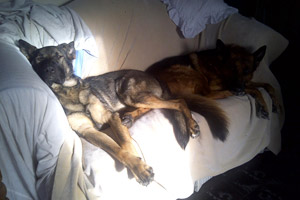 Crash acclimated with gusto to his busy life in Canada. He’s now nearly 80 pounds of muscle and thick coat. Every day, Crash and Teresa’s two other German shepherds have a routine. They dedicate a couple hours to running in the morning, and evenings are for scent work, during which Crash learns to identify and alert Teresa to designated scents. He’s already excelling at sporting scent trials, and Teresa says, “He loves it. He’s on fire; we say he’s crashing the Sporting Detection Dogs Association here in Canada.”

When he’s not running, training, playing with his new brothers, or chewing on bones or squeaky toys, Crash’s favorite thing to do is hang out with Teresa’s husband and son in their “man cave,” where they play video games. She still almost can’t believe Crash is hers. Teresa says, “If he could get through all his troubles and transcend into the dog he is today, that’s amazing. That’s character.” As to his checkered past, Teresa says, “We’re not looking back. Now he’s just a happy boy and we love him.”

Learn about all Best Friends’ work in Los Angeles.