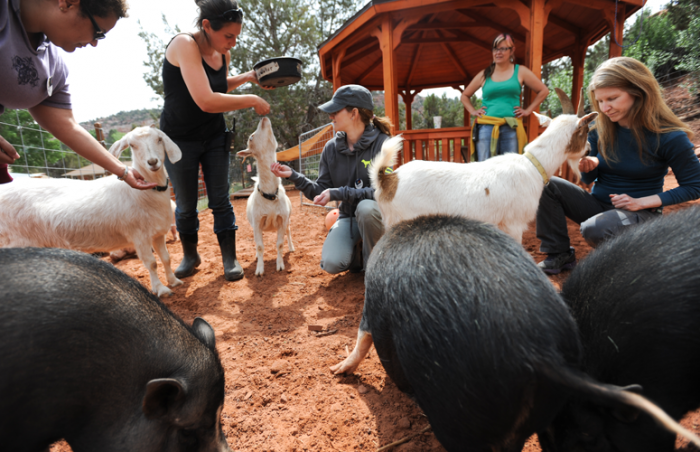 Marshall’s Piggy Paradise at the Sanctuary is more than a paradise for pigs. Visit at the right time and you’ll not only see pigs rooting around in the sand, wallowing in mud baths and lounging in the sun, but also goats trotting and frolicking alongside them. The agile barnyard buddies leap up on rocks to enjoy the view, stretch out their necks to munch on tender green leaves and occasionally rub noses with their porcine pals. The interspecies play dates are possible because the pigs’ recently remodeled community digs are the perfect playground for both pigs and goats. Best of all? The barnyard pals benefit each other in more ways than one.

An ideal playground for goats and pigs 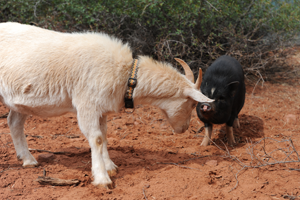 Caregiver Rosalie Wind, who was on hand for the inaugural goat/pig play date, said at first the goats hesitated, but they soon realized that with all its new smells, tasty leaves and big rocks to climb, Marshall’s Piggy Paradise was an ideal playground. And the goats’ best surprise of all was their fascinating new playmates. In fact, everyone had so much fun, goat/pig play dates have been added to the animals’ routine and they couldn’t be happier.

On a recent summer morning, Pan, a dwarf goat, anticipating a trip to Paradise, began bleating loudly. He wasn’t the only eager one because that day, Pan’s play group would include Lillie, Glory, Steve and Biscuit (another adorable dwarf goat). As soon as leashes were securely clipped onto the goats’ collars, the group, led by caregivers and volunteers, jogged over to the pig enclosure.

Once inside, the goats’ noses twitched and their tails wagged happily. Several of them headed up a small incline, while Pan and Steve went to work trimming some trees. Meanwhile, Gene, Elliott and the other pigs gathered to greet their friends and get in on the excitement.

For the next several hours, the goats explored the area while the pigs followed along companionably. While there was none of the playful wrestling that is so common in dog play, there were a few gentle nose touches, lots of curious sniffs and grunts and one friendly game of chase.

Play dates for all animals

But the animals don’t always have to be actively interacting to benefit from having each other around. The change of scenery and extra exercise alone are great for the goats. The play dates even helped Biscuit, who was new to the Sanctuary, blend into the goat herd. As for the pigs, Rosalie says it’s good to get them acquainted with other species, as they tend to get adopted to homes with other barnyard animals. They see that the goats are non-threatening – and helpful too. The scents they leave behind are interesting, and the goats (all considerably taller than the pigs) knock yummy leaves off the trees for the pigs to eat.

Most important, each species learns from the other, especially when it comes to interacting with humans. Because more people tend to volunteer with pigs than with goats, the goats get extra interaction with people during play dates.

This increased exposure has been especially beneficial for Steve the goat, who’s become much friendlier since he started watching pigs like Doogie interact with people. The young, blue-eyed piglet is a volunteer favorite. He often rolls over onto his side to enjoy pets and belly rubs, modeling good social behavior for the shy Steve.

While the animals are just out to have fun, we know that well-adjusted, happy, social goats and pigs find homes faster, and that means everyone wins this barnyard game.

Note: all this extra socialization is working wonders. Pan, Glory, Biscuit, Gene, and Elliott have all been adopted.