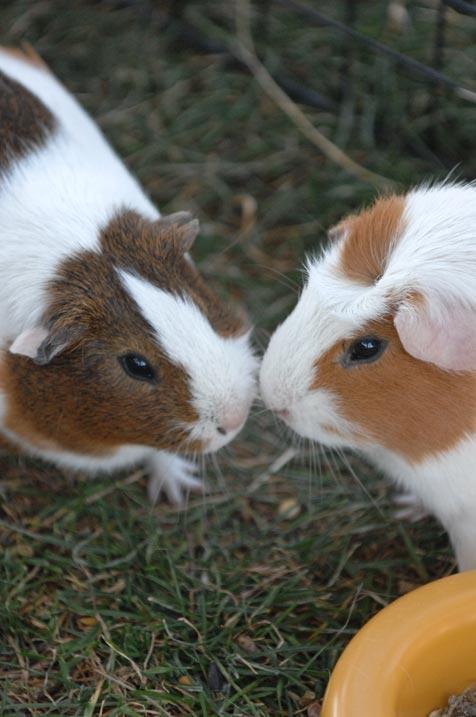 Guinea pig enrichement in the form of grass nibbling

If you’re planning to visit the rabbits at Best Friends any time soon, don’t be alarmed if you happen to notice a few crop circles in the Bunny Park. No, the rabbits aren’t plotting anything sneaky with aliens. (At least not that we can prove. …) It’s just that once again there are a few guinea pigs back in town. And they’ve been busy at one of their favorite pastimes. Creative lawn care!

Guinea pigs live at the rabbit part of the Sanctuary. Rabbits and guinea pigs are kindred spirits in a lot of ways. Both are quiet, even-keeled, and not prone to leaping across the room to chase bugs at every opportunity. They’ve been a good fit for each other. While the Bunny House is mostly designed for rabbits, there have almost always been a few guinea pigs around as well. Not long ago, however, several terrific adoptions found all the guinea pigs in new homes. For a short while the Bunny House didn’t have a single guinea pig to round out the ranks.

Then a rescue in northern Utah contacted Best Friends looking for help. They were overflowing with new guinea pigs and wondered if several of them could come to the Sanctuary. The timing was perfect. Normally, guinea pig spots are few and far between at Best Friends, but thanks to all those recent adoptions there was indeed some space. Four of them came to live at the Sanctuary.

Ben, Jerry, Carl, and Chet have been settling in and adding their charm to the place. Ben and Jerry live as a pair, as do Carl and Chet. Ben and Jerry, who are a little younger, have been especially active at chasing each other around their play area.

Most of the time these play sessions are all about having fun, yet once in a while they decide to try and act tough around the other guy. (Boys will be boys, right?) When guinea pigs want to intimidate each other, it’s actually hard not to laugh at their methods of choice. They puff themselves up to look as big as possible and then do a sideways shuffle step that looks for all the world like a couple of sumo wrestlers trying to scramble around the ring! At least these zany antics are only for show. They’re only trying to look the part, not actually be mean to one another.

Chet and Carl, meanwhile, are a little older and don’t bother with the sumo wrestler routine. They’re just happy to have a buddy to play with and all the grass they could hope to eat, which brings us back to those crop circles.

Nibbling on the bunny park grass

The rabbits at Best Friends have a bunny park they get to use and enjoy on a regular basis. The bunny park, an enclosed area with grass, is a terrific space for the rabbits to run and play with new friends. You might think the rabbits would devour the grass to nothing, yet they don’t. They nibble at it and sometimes dig holes, though they don’t actually sit and graze nonstop. They’re too busy mixing and mingling with other rabbits. It’s the guinea pigs who know how to work hard and enjoy a meal at the same time.

When the caregivers place the guinea pigs on the bunny park grass, the little guys nibble the blades down to perfect length the whole time they’re out there. It's great enrichment for these dedicated landscapers who don’t want any time off, not when there’s an outdoor buffet to enjoy! The guinea pigs play in large, round, open-bottomed play pens in the park. This gives them freedom to explore, as well as a little privacy from all those rabbits zipping back and forth. Caregivers relocate the portable play areas from time to time, leaving circles of perfectly trimmed lawn in their wake. Yeah, it kind of looks mysterious when you observe the aftermath, but it’s really nothing more than a few hard-working guinea pigs enjoying their daily outings.

When it comes to animal care at the Sanctuary, whatever it takes to make the animals happy is the order of the day.

Adopt a pet from Best Friends.