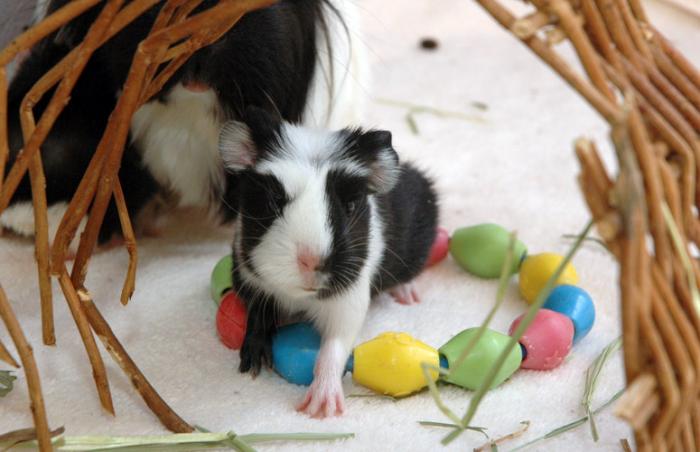 The pups' parents, Portia and Allen, came to Best Friends from a lady in the Phoenix area who takes in guinea pigs who have nowhere else to go, or who find themselves in bad situations. At one point, Portia and Allen (who was originally named Ellen) had been advertised on Craigslist. Unfortunately, animals listed on Craigslist as "free to a good home" don't always find one. So, Portia and her partner went to the rescuer, who quickly realized that Ellen was actually an Allen - and likely responsible for Portia's pregnancy. 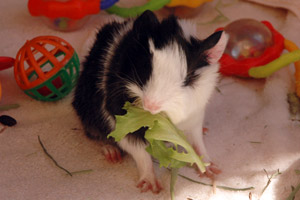 Portia and Allen are now living separately, and Best Friends is making sure that the two of them won't be having any more litters. But the little ones they do have are pretty irresistible, not to mention entertaining. This is because, unlike puppies, kittens or rabbits, guinea pig pups are born precocial, meaning they are quite independent. They have all their fur and teeth, their eyes are wide open, and they begin running around their cage and eating regular food, including hay, on their very first day. They also get up to some pretty adorable antics. Sometimes, the babies will leap straight up in the air very suddenly, a trick that guinea pig lovers call "popcorning" (the official term is "pronking").

Despite their cute behavior and impressive self-sufficiency, they are still babies who need their mother. Portia will nurse them for about three weeks, and their caregivers at the Bunny House are also giving them plenty of TLC. They've set up a mini igloo in their cage, so that they can cuddle inside of it with their mother. Caregivers have also set up shallow water and food dishes in case they happen to fall in and go for an unexpected swim. Because they love all kinds of veggies, and guinea pigs need high doses of vitamin C to stay healthy, they get a nice salad every day, too. 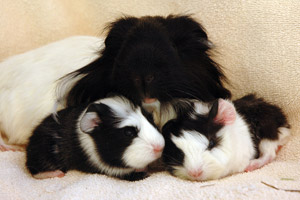 All these furry little black-and-white creatures need now are names, and homes. It may be several weeks before their caregivers can tell whether they are "Ellen"s or "Allen"s, but as cute as these little guys (or girls) are, they probably won't be hanging around the Bunny House too much longer than that.