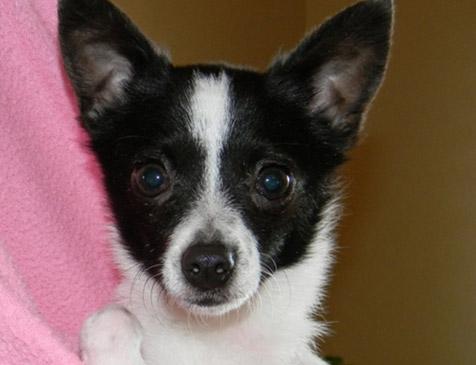 Gunner’s Run Rescue, a No More Homeless Pets Network partner, saves dogs who are in danger of being killed in the shelter system, abandoned by their owners, or put down by breeders who don’t want them anymore. The organization works closely with Elanna Bradley, Chester Illinois Animal Control officer, to save at-risk dogs.

Founder Tammi Craig started Gunner’s Run Rescue six years ago when she lost two souls who were very close to her heart: her beloved grandmother and her dog, Gunner. She was depressed and wanted to do something with her grief. She first started fostering homeless pets, but she knew she had more to contribute, so she began her own dog rescue nonprofit, Gunner’s Run Rescue.

Along the way, she’s fostered a relationship with the local animal control near her home in rural Ruma, Illinois. A nurse by trade, she has empathy for the dogs who need medical attention.

It was New Year’s Day when Tammi got the call from a lady about three dogs who needed a place to go. Two of them were healthy and would be adopted out quickly. But there was something terribly wrong with the third. Mia the Chihuahua mix was horribly emaciated. When Tammi asked about her condition, the lady replied, "Oh, she should be fine."

No, Mia was not fine. She was first diagnosed with a bladder infection, which led to more tests. The vet then discovered she had grape-sized gallstones. After surgery, her stones were analyzed and found to be 100 percent ammonia based, which indicated her liver wasn’t filtering her blood. Mia had some serious medical issues. The veterinarian determined she would need another surgery to address complications with her liver.

Coming together for a Chihuahua mix with medical challenges

As the costs mounted, Tammi turned to Best Friends to see if there were any resources available. Diane Young, regional specialist for the No More Homeless Pets Network, got the case and was determined to get this little girl all the help she could.

"After evaluation of the potential for successful surgery by our veterinarian," shares Diane, "Best Friends helped with a contribution to Mia’s medical expenses. Meanwhile, Tammi and her group kept raising money and were able to raise most of the funds through their own efforts. This kind of collaboration, with groups that are working as hard as possible to meet their own unexpected medical expenses, helps all of us to reach our goal of No More Homeless Pets."

To prepare her for her lifesaving operation, Tammi was helping Mia further by providing her with a homemade, restricted diet and medication. She came through the procedure like a champ on Valentine’s Day, but she wasn’t out of the woods yet. Tammi continued to monitor her health closely.

Then one month later, Tammi took Mia back in for tests. Weighing a robust seven and a half pounds — a weight gain of three and a half pounds — Mia was looking much better. The biopsy of her liver confirmed there was no long-term damage and the doctors predict Mia will make a full recovery.

Tammi is thrilled to say the least: "I really felt that Mia deserves a chance at a great life. After all, she is the greatest little dog."

Find out ways you can support Gunner’s Run Rescue. Mia is also available for adoption.

Help save an animal's life

When you donate to Best Friends, you are helping homeless pets across the country get the extra help they need to get their second chance.