Take a little patience, add a pinch of determination and a sprinkle of optimism, and you’ve got yourself a recipe for helping a cat with irritable bowel disease (IBD). OK, you’ll also need a good diet (usually found after some trial and error), the flexibility to pivot when you need a new game plan, and the ability to stick to a routine. Whew!

Despite the requirements, adopting a cat with IBD can be incredibly rewarding and, no, it doesn’t mean (and allow us to be frank here) you’ll be cleaning up smelly messes on the regular. In fact, IBD, while chronic, is often manageable. Once it’s under control, you may even forget your cat has IBD at all. 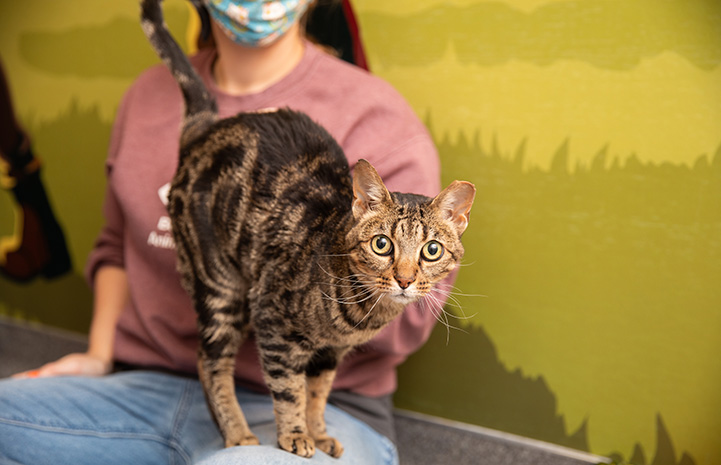 When Chia came to Best Friends in Utah from a shelter outside of Salt Lake City, she looked pretty rough. The senior gal didn’t feel too good either. She was skin and bones, was losing her hair, had terrible diarrhea and vomited constantly. She had a history of pancreatitis and arrived at the shelter with the parasites giardia and coccidia. And having these two medical conditions at the same time meant there was no way she could escape having an upset stomach.

To help her feel better, the medical team placed her in intensive care at the Best Friends Lifesaving Center. The treatments cured her giardia and coccidia, but she was still battling diarrhea and still had bouts of vomiting. At that point, it was time to dig a little deeper, so the medical team sent a biopsy out to see what could still be going on. A few days later they had their answer: IBD.

That’s when they decided to try a raw food diet. Within a few weeks, Chia looked noticeably different. She gained a little weight, gained some luster to her fur and also appeared to feel a lot better. She even began leaving a solid stool in the litter box (and if you’ve ever lived with a cat with IBD you know that’s a pretty big deal).

At this point, it was time to help Chia find a foster home, and Catie Olavson, a Best Friends veterinary tech, quickly stepped up to help. She had been in Chia’s corner from day one, and she had just the right foster home in mind ― hers. 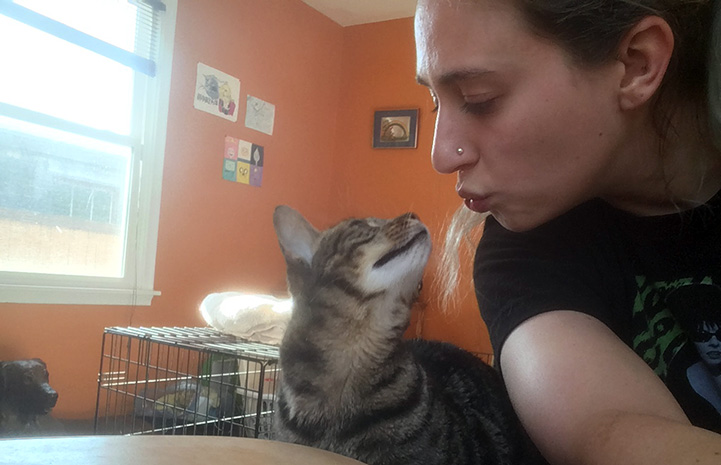 Fostering is ideal for cats with IBD

The shelter environment can be stressful for cats, and stress can aggravate IBD. At Catie’s place, Chia had a chance to really relax, unwind and let her raw food diet work its magic. That helped her turn a corner; however, the change didn’t happen overnight.

During the considerable time that Catie fostered Chia, there were a few lows when Chia’s IBD would flare up. But the senior cat never let an upset tummy get the best of her. “She’s very playful and energetic,” says Catie. “You’d think anyone with consistent stool issues wouldn’t feel good, but she wouldn’t let it keep her down.”

If Chia wasn’t playing fetch with toys, you could find her window watching. She also became a great conversationalist who would talk to Catie all day when she was around.

After living with Chia for so long, it stood to reason that Catie would get attached to her. But she knew there was another loving home out there for Chia ― one with a patient and understanding adopter who saw the cat for much more than her IBD. And that’s just what happened when Ashton Barney contacted Best Friends to inquire about Chia.

Ash and his roommate, June, were looking for a senior cat to adopt, and they fell in love when they saw Chia on the Best Friends website. She was just the cat they had been looking for. In fact, her IBD wasn’t an issue at all ― quite the contrary. You see, Ash has had issues with his stomach too, so he’s no stranger to what she’s going through. 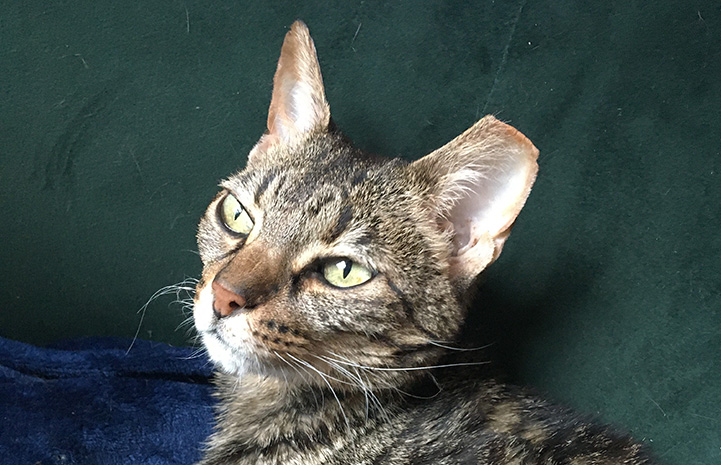 Life lessons from a cat: living in the moment

Ash and June hopped on a video call with Catie to meet Chia and after seeing her in her element for just a few minutes they were ready to talk adoption. When they got to the topic of Chia’s IBD, Catie knew it was essential to be transparent. “I was pretty point-blank with Ash on the IBD problems and tried to explain in the least offensive way possible that without her raw food diet, she would make a mess of the house,” she says. The frank conversation didn’t deter him ― not for one minute. “I knew it would be a bit of a process,” says Ash.

Here’s the thing: Ever since Chia settled into her new home with Ash and June, there really haven’t been any issues at all. Ash reports she’s feeling good (although the three cat boxes they’ve set up strategically around the apartment have probably helped).

Chia has managed to teach Ash and June her version of “fetch,” which involves hiding behind the sheer curtains and popping out just as they walk by. Of course, she’s always up for the more traditional version and will drop a ball down on the floor and meow until someone picks it up and plays with her.

Just like she did at Catie’s place, Chia will strike up a conversation with anyone at any time. And she’s laid claim to Ash’s bed. “My bed is now our bed,” he says, noting that during the quarantine, she helped him slow down and stay calm. “She’s helped me focus on the moment and has given me a lot of stress relief. She makes coming home fun because we have a little family member waiting for us.”

As for her IBD, the raw diet has worked wonders, but Ash doesn’t worry about the day it doesn’t. Instead, he’s planning on living in the moment the way Chia has taught him to. “I’ll just get my carpets cleaned,” he says. “Adopting Chia was one of the best things I’ve ever done.” 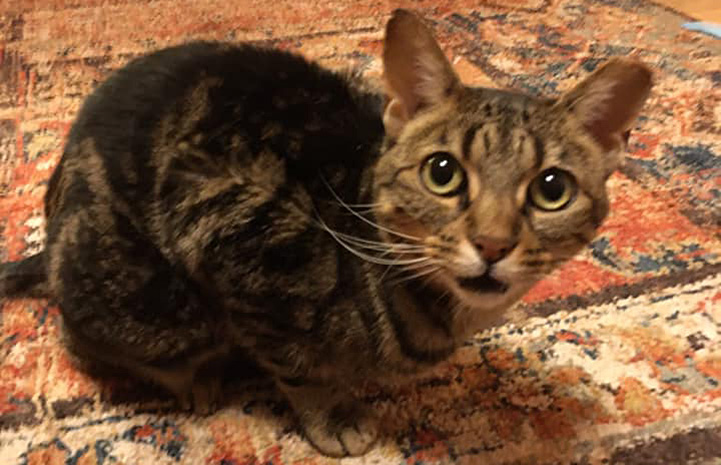 Make a difference in the lives of pets

Declawed cat gets surgery for sore feet, then finds a home