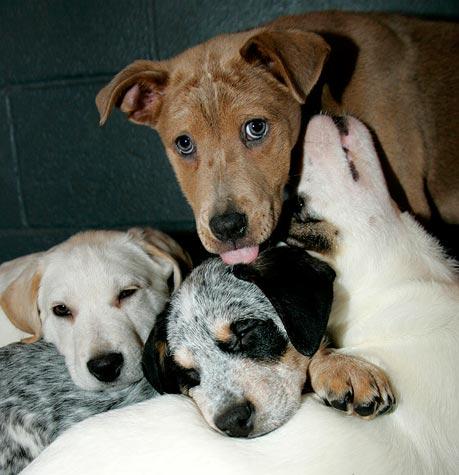 These adorable pups came to Best Friends from DAWGS in Dalhart, Texas, where it's the children who are making a no-kill world for their local animals.

These puppies aren't the only Dalhart shelter dogs who've put their roots down in new places. Best Friends has been helping the Dalhart kids move lots of their dogs to rescue groups all across the country.

Jean Hansen, who runs Best Friends' transportation program, feels helping these kids with their no-kill shelter is critical. "When they grow up and move to Arkansas, to New York, or to other parts of the world, the lessons they've learned in Dalhart are going with them. We want to help that lesson to be, 'We tried to make a positive difference, and it paid off. It worked.' They do a heck of a job, but we have to help them so they don't get burned out."

Jean normally just moves animals to and from the sanctuary, but this time she and her team are volunteering to move Dalhart dogs from their shelter to whoever will take them.

And moving a bunch of dogs in a van is not as easy as it sounds! Some need to take constant bathroom breaks. Others bark the whole way. Puppies need to be cleaned up after. If anyone begins acting sickly, a vet stop may have to be made. And at night, who knows what, if any, hotel will take them all in. But it's all worth it, says Jean, because it's lifting some of the burden from those kids, who work so hard.