Destiny Haney wants to help every cat live his or her best life, though she admits there was a time when her definition of “best life” was different from what it is today. “I used to be a person who, anytime I saw cats outside, I felt like I needed to rescue them in some way,” Destiny says.

“Then I realized they really didn’t need me to be rescuing them. Most of the time, I was taking them from a community where they were happy and safe.” 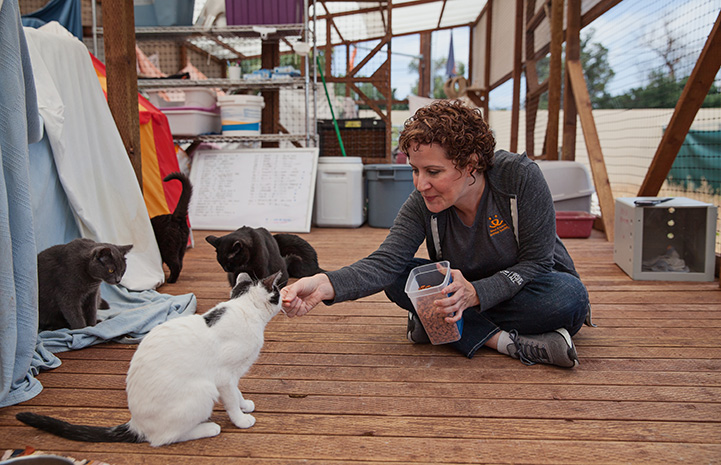 Now, Destiny is helping cats by keeping them right where they are, and she’s encouraging others to do the same. As one of several Best Friends community cat managers, Destiny oversees three-year programs in which Best Friends staff members work in municipal shelters alongside their staff to save colonies of cats through a combination of return-to-field (RTF) and trap-neuter-return (TNR).

Here’s how RTF and TNR programs work: Community cats are trapped by animal rescue organizations or shelters, then spayed or neutered, vaccinated against rabies and returned to the area in which they were trapped. “The goal,” Destiny says, “is to lower the shelters’ intake of cats and find positive outcomes for cats who usually wouldn’t have positive outcomes.”

Through this work, Destiny has found that community cats, and the locals who support them, are what she identifies as “underserved, not undeserving.” The lack of support, assistance and overall understanding is partially rooted in the general public’s misconceptions (similar to the beliefs Destiny once had herself) about community cats and the ideal home for these felines. The cats do not need to be brought to a shelter, Destiny says. Many municipal shelters lack the space and resources required to save them, and community cats generally are poor candidates for adoption.

What is a community cat?

Samantha Bell, the cat behavior and enrichment lead at Best Friends in Los Angeles, defines a community cat as any feline who doesn’t have a specific owner and who lives outside in a colony with other cats. But as for commonalities, that’s about it. Community cats can be from many walks of life. They may be pets who were abandoned or became lost, felines who have lived outside their entire lives and have never had direct contact with a human or indoor/outdoor pets who have decided to “adopt” additional caregivers in their neighborhoods.

Sure, all these cats can live together outside of a home, but not all of them would do well as a house pet. Some community cats are socialized to people and others are not. The two things that most affect which group a feline will fall into are time and the human touch. “The first eight weeks are critical in creating a social cat,” Samantha says. “But even if cats haven’t interacted with humans during that period, with patience and understanding on the part of humans, they still may develop social bonds with their people.”

How humans can help unsocialized community cats, who are more than capable of navigating the outdoor life they have led so far, is far different from the adoption success story that many animal lovers might have in their heads. 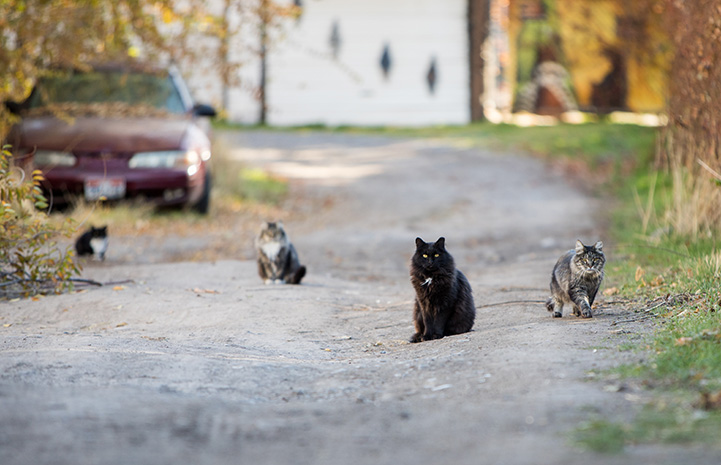 Unfortunately, telling the difference between a socialized community cat and an unsocialized one isn’t easy, especially in a shelter setting, where many community cats end up — dropped off by either animal control, an annoyed neighbor or a well-meaning pet lover.

In a shelter, both unsocialized and socialized cats often act “feral,” Samantha says, as any animal might if snatched up, put in a weird-smelling cage and poked by a stranger. “Being able to recognize the difference between the ones who do want to be friendly with people and the ones who are truly unsocialized is a skill,” Samantha explains.

The cat behavior team at Best Friends in Los Angeles looks for certain signs to help determine if a community cat is socialized to people or not. It’s likely that the cat is social if he is hanging out near the front door of the cage, making “chirping” sounds, rubbing on the cage door, kneading, willing to touch a human in a friendly way, playing in the cage or pointing his tail up. The team only needs to see one of these signs, even if it’s accompanied by hissing and growling, to start work on placing that cat in a home with people who want a friendly pet.

However, not all socialized community cats will show these signs. Some might be too overwhelmed in a shelter to reveal their social side. To make matters more complicated, there are no readily detectable traits that only unsocialized cats exhibit. Understandably, since it is hard for trained shelter workers to distinguish easily between socialized and unsocialized community cats, it’s almost impossible for an everyday animal lover who spies a cat walking down the street to make that judgment call. 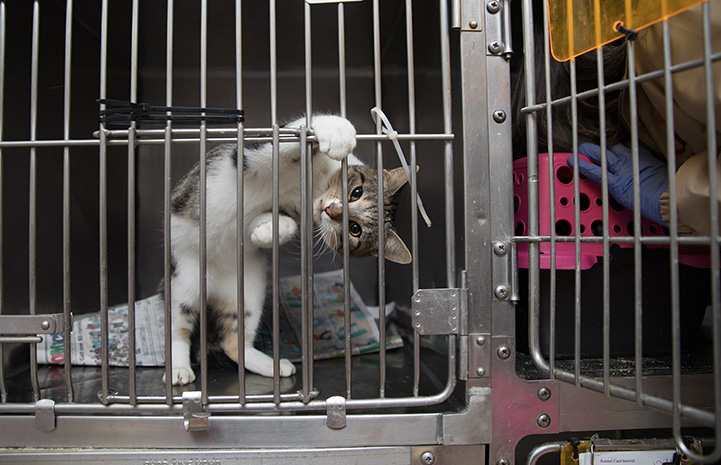 Helping the cats in your community

Destiny says, “If you are out in the community and you see a cat who looks healthy, is not injured and doesn’t seem to be in distress, in most situations that cat knows exactly where he is and doesn’t really need any help from us, except making sure that he is neutered.” Community cats who are spayed or neutered won’t have kittens who end up in the shelter system, which leaves room for socialized cats who need and want forever homes.

How do you know if a community cat needs to be spayed or neutered? Look for an ear tip (a small piece missing from the top of one ear). Ear-tipping is the universal sign that a free-roaming cat has been fixed.

If the cat doesn’t appear to be ear-tipped, you can help this feline — and others — by seeking out a local TNR program. Through the program, the cat will be humanely trapped, spayed or neutered and then returned to the location where he or she was found. Want to help out even more? Borrow a trap and learn how to trap cats yourself. The presence of one unaltered cat likely means that there are more in the vicinity who should be fixed. The goal is to stop the entire colony of cats from breeding and stabilize the population.

Local organizations and Best Friends can provide resources on how to get involved with TNR and other programs that provide long-term benefits to the cats in your area, both in the community and in the shelter. If you find that your municipality doesn’t have any community cat programs or, worse yet, has legislation that prohibits these programs, Best Friends legislative attorney Richard Angelo Jr. suggests bringing your concerns to the local government.

“The best thing people can do is attend their city council meetings, township board meetings and county board meetings, and get to know who their representatives are and whether they are open to presenting this case to their colleagues,” Richard says. He notes that Best Friends is happy to provide folks with resources to implement TNR programs, but we often find that local governments respond best to their own constituents bringing the issue forward first.

For the unsocialized community cats who do enter shelters and, for whatever reason, cannot be returned to where they were picked up, working cat programs are a lifesaving option. These programs give cats jobs by placing them on properties as rodent deterrents.

In Washington, D.C., Humane Rescue Alliance started one such program, called Blue Collar Cats, two years ago and recently placed their 200th feline. Blue Collar Cats now has a waiting list of pre-screened local businesses and properties looking to deter rodents by taking in a working cat. The interested parties are often individuals who have never had a feline before, but the new addition quickly turns them into cat people.

“It has been amazing to see how the caregivers have assumed ownership,” says Lauren Lipsey, the vice president of community programs at Humane Rescue Alliance. Lauren has received countless photos from the program’s participants, who went from being interested solely in the cats’ pest control skills to signing up eagerly for shelter-building workshops to ensure that their furry business partners are comfy during colder weather. 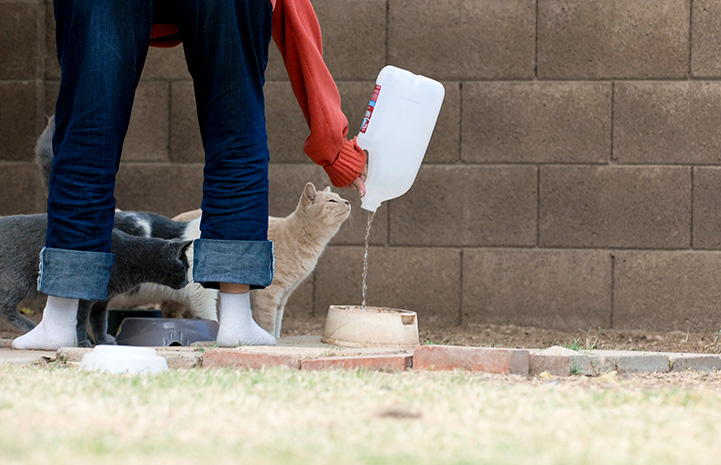 Best Friends has a similar program in Los Angeles. Samantha and her cat behavior team work with the Paw Mission to place unsocialized community cats in sometimes glamorous locations, such as wineries, to help those businesses keep rodents at bay. Occasionally, there’s even an unintended result. Samantha says, “A year later, we might hear this from the business: ‘That cat you sent us is so nice — and living on our couch now.’ Our program is great because, no matter what, there is a positive outcome.”

After all, “rescuing” comes in many forms. For some cats, it’s an adoption that means a life spent curled on a bed. For others, it’s a new job as a proud working cat. And for others still, it means staying exactly where they are — home street home, indeed.