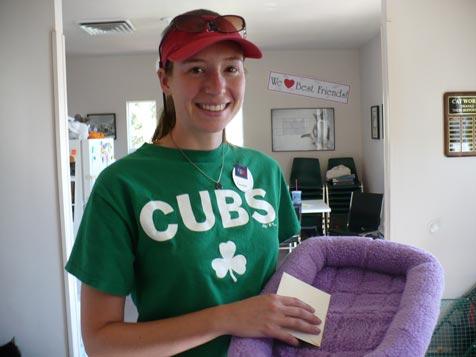 Carolyn Morris knew something was up when her husband, William, played their song on the car stereo. Whenever William is about to spring a big surprise on Carolyn, he tips her off by playing their song—an instrumental soundtrack from the movie The Winslow Boy.

At the time, this newlywed couple from Massachusetts was on their honeymoon. William had planned a trip out west full of surprises. What else did he have up his sleeve, she wondered, when William finally pulled out the big guns and played the song? Only the snazziest stop in the whole honeymoon, of course. A trip to Best Friends!

Not long ago, neither of them had heard of Best Friends, despite the fact that they are both hugely into animal rescue back in their neck of the woods. When William was planning the schedule, he found an article about Best Friends in a travel magazine and just knew they had to stop at the sanctuary.

However, a simple drop-in wasn’t enough for this groom. Nope, he called ahead and asked if there was anything he could do to help the animals. He talked with the folks over at Kittyville and they mentioned a need for cat beds. After that, William bought a whopping 72 cat beds, including a couple of kitty condos. Wow! The price tag for all of them was somewhere around $750.

When they arrived at the sanctuary and visited Kittyville, the cat caregivers made a special thank-you presentation to Carolyn. This was the first she’d heard of it. William’s donation was also a gift to her. She broke down crying (good tears, folks, good tears!) at the surprise gift. Man, talk about racking up some serious brownie points right out of the starting gate!

A donation for the horses too!

Even though their trip was packed with everything from whitewater rafting to hiking the nearby national parks, William and Carolyn describe their stop at Best Friends as the highlight of their honeymoon. In fact, they decided to leave an extra check for $250 to the horses at the sanctuary. Sometime down the road they’ll be back for another visit, this time with Best Friends as the main destination. Perhaps an anniversary tradition in the making? Thanks again, you two.

Learn more about visiting Best Friends on our visitors’ page.