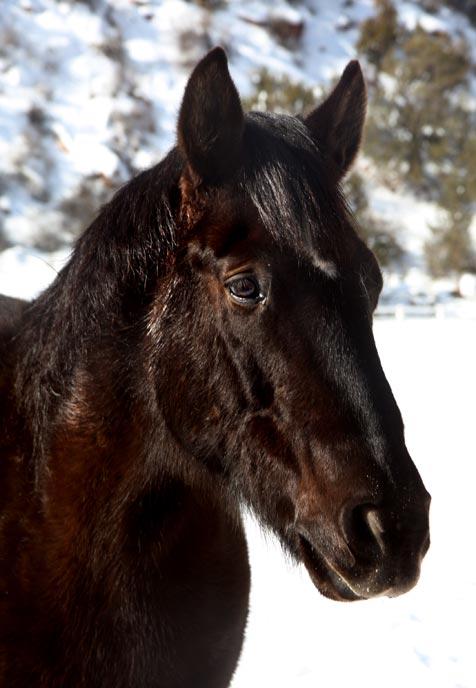 Nobody can complain to Bryce the horse about spring fever without getting an earful right back. And chances are, you don’t stand a chance in a bragging match. Bryce has been dealing with spring fever since last spring! He’s bursting at the seams to get out and really stretch those legs.

Horse with a leg injury

Bryce came to Best Friends with an old leg injury that was keeping him down. The whole mess began when Bryce got his foot caught in a gate mechanism. This was no ordinary gate, it seems. Must’ve been designed to double as a burglar trap or something! Even with his people doing all they could to pry him loose, and Bryce tugging nonstop on his end, the final solution wasn’t pretty. They had to cut through the metal bars with a welder to get him out. Ouch!

That all happened two years before he came to Best Friends, and the injury never healed properly. By the time he came to the sanctuary, Bryce was a wreck. The bones in his leg had deteriorated to the point where he was in pain more often than not.

Bryce needed surgery, so last May, he headed up to Wyoming to see a specialist for his operation. He came back to Best Friends with screws and pins in his leg, and strict doctor’s orders to stay put! Since that time, he’s been under close watch in a rather small play area. It had to be small so Bryce wouldn’t be tempted to run and romp. That leg had to heal.

At least he had good company. Bryce has been bunking next to two other horses in a larger pasture, both of whom he likes very much. Midnight and Rocky love to lean over and play games with him. All along, they’ve been cheering up their friend while the bones in his leg fused together. (It’s your true friends who visit you in the hospital, you know.)

Now, after long months of waiting, he’s finally ready to be turned loose for some overdue zooms with his buddies. He’s all better! Probably best not to stand too close, though. After being cooped up for so long, chances are Bryce won’t be slowing down for a casual stroll any time soon!