Horses get a leg up on training in new covered arena

Horses from all walks of life get top-notch training at Best Friends Animal Sanctuary, and for years all that training took place outdoors. While horses love and need plenty of wide-open space to live, training facilities are a different matter. The small outdoor arena and round pen at Horse Haven made it possible for trainers to work wonders with the horses in our care. But they were always at the mercy of the weather. Southern Utah’s rain, snow and intense summer sun have dictated when trainers could work with horses and how much they could do. Well, not anymore.

After years of anticipation, planning and construction, the new covered arena at Horse Haven is complete. Now it’s possible to work with the horses year-round in a roomy, safe, top-notch space.

“The old space was like kindergarten,” says trainer Ann Hepworth. “The new arena is more like college.” And these horses are studying for finals and learning new tricks and skills along the way. The staff has wasted no time bringing horses into the new space and getting to work.

Here’s a look at how things are going with a few of the horses in different stages of their rehabilitation and training. 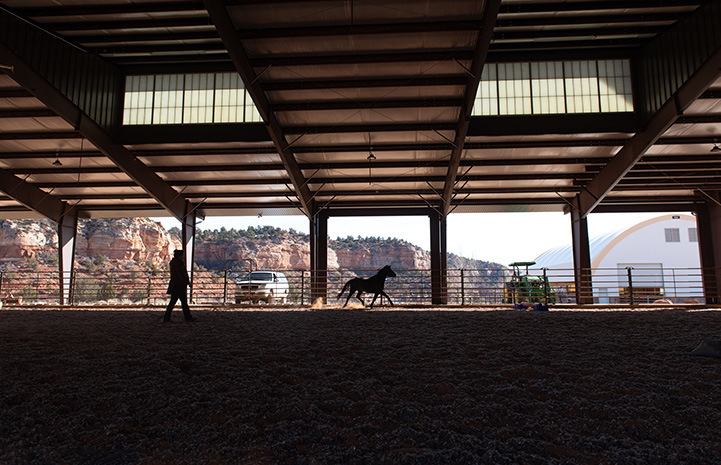 Bergie’s first reaction to stepping foot in the new space was to do laps at a full gallop. She had to be given time to move her feet, work herself up and then find her calm. Moments of relaxation, licking and chewing (as she stood still in the large arena) became longer and longer until she was able to find comfort by just standing in the middle of the space.

It was important for Ann to see how Bergie responded to being out of her comfort zone and to help her feel at ease. If that stress can be worked out in the arena, it becomes easier to address in other places. That skill will also help Bergie overcome other obstacles that she’s likely to come across in the world outside. “The arena lets us simulate anywhere else she’d have to go,” says Ann. “It will help prepare her to go farther from home.”

After nearly a dozen visits to the arena, Bergie is comfortable and relaxed. Instead of running off soon after arrival, the first thing she does is to eagerly await a good brushing. She also loves the attention and looks forward to getting those itchy spots taken care of after leaving her friends in the pasture. After finding her calm, she can move on to the next steps in her education. 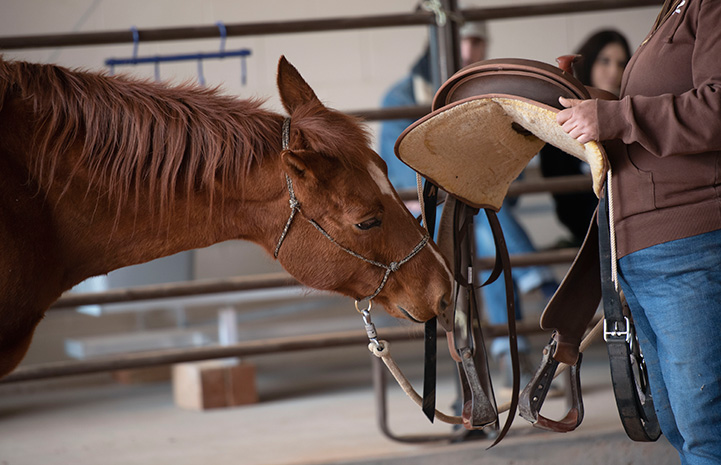 Tula finds focus in a task

When Tula first came to the covered arena, she tuned in to the strange new sounds around her: wind ringing through the paneling, snow falling off the roof and people driving by. It was all new, strange and sudden.

While Bergie needed time to stand still and relax, Tula was the opposite. She needed to focus on a task. If left without something to do, she would only get more and more tense. Tarps, flags and balls were good toys to keep her focused. It took even fewer trips to the arena for Tula to be comfortable and start ignoring the weird sounds.

For Tula, who began life as a wild mustang, the large space was an important way to test how connected she was to the person working with her. It was important to start in a smaller space, but just as important to work up to larger and larger ones. It’s easy to stay connected to a person only a few feet away. But when there’s suddenly a lot of other options, that connection is truly tested.

While working at liberty (not being held on a lead line), it was easy for Tula to disconnect and run to a corner near her friends. And though she sometimes still does this, she always comes right back because her relationship with her people is strong and the larger space gives her the opportunity to make that choice. 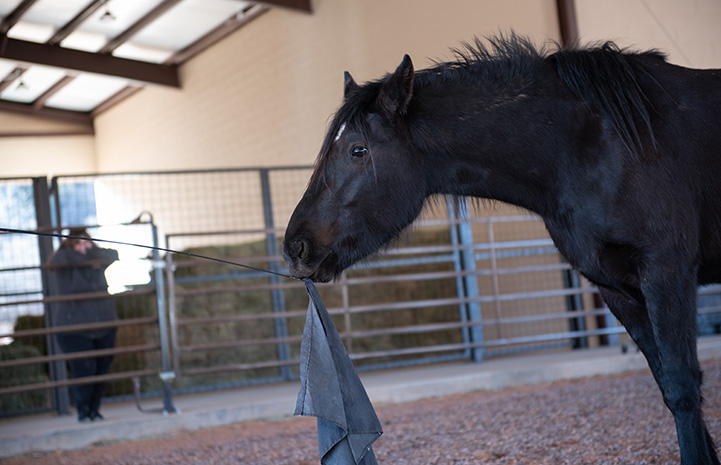 For Jasper, the arena itself wasn’t challenging. Though he had never been handled before arriving at Best Friends, he did spend time in a foster home where he learned that people weren't too scary. Today, he really likes people and feels safe with them. That connection helps him to feel more comfortable in a new, potentially scary place.

The main focus of Jasper’s training is building confidence and moving forward. For a horse who may be a bit of a shrinking violet, Jasper must become more self-confident in order to find forward (especially with someone on his back), and for that consistency and routine are key. Knowing what to expect when he goes into the arena and knowing what is being asked of him are things that help build up the confidence he needs to do everything else.

Moving forward is already difficult in a small arena, so Jasper’s apprehension may have been less noticeable and more easily contained in the former facility. In a more open space, that apprehension becomes more prominent, but with Jasper taking comfort from the routine of the new arena, Horse Haven staff have been able to get him going forward.

Jasper is getting the chance to work on many things that he couldn’t previously work on in a smaller space. 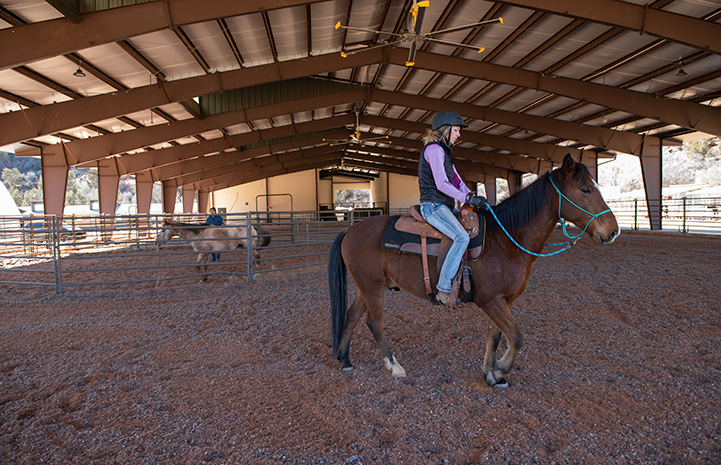 Prince is such a confident and calm horse that on his first time in the new space, he was galloping around and playing with one of his favorite toys — a big ball. He was actually having so much fun that he ended up popping it.

To Prince, the arena is a happy place where he goes to have fun. The new space presents more opportunities for trainers to do new things with Prince and keep him from getting bored.

Another case of similar but opposite, Prince was reluctant to go forward just like Jasper; however, for Prince, it was more a case of finding it too boring. When Horse Haven staff started working with him in a round pen, he didn’t see the point of going around in a circle, so he just wouldn’t do it.

Little circles are better for horses with too much forward momentum. For someone like Prince or Jasper, who have trouble going forward, it’s important to be able to work on long straight lines. Trail rides are the best for going forward. But you can’t start at the finish line, and a young guy like Prince needed to first get used to the arena, where it's safer in the early stages for everyone involved.

Having the long side of the new arena to work on, he was able to build up his movement and really feel like he was going somewhere. It wasn’t pointless anymore. With that practice put in, he was able to go on his first trail ride and he handled it like an A+ student. 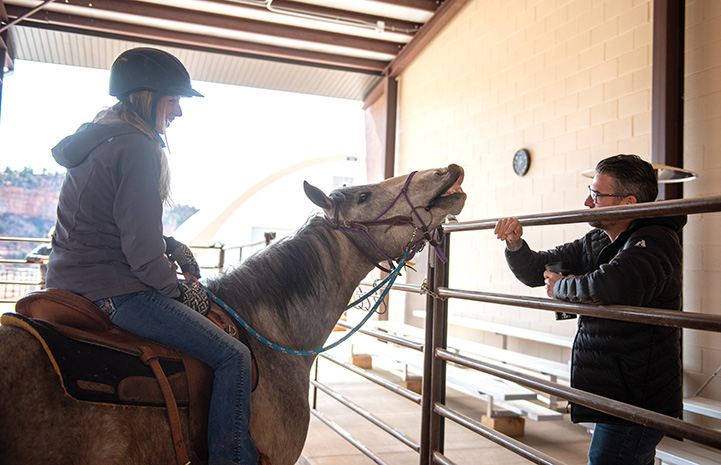