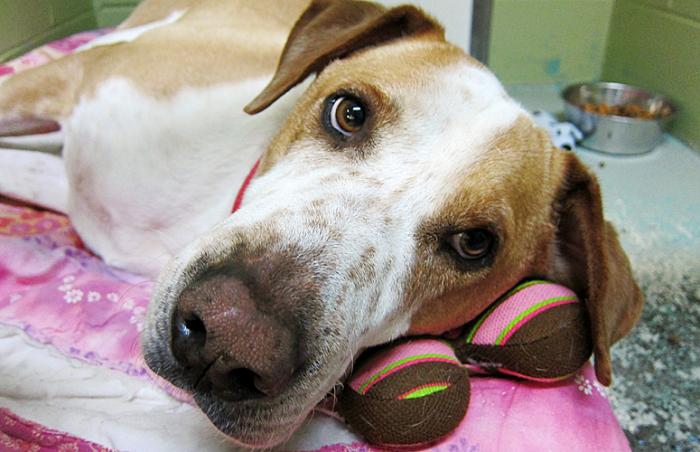 When Maverick, a white-and-brown, freckle-faced hound mix, found himself in a Texas shelter, he was emaciated and infected with heartworm. To make matters worse, a health risk meant that all the dogs in the shelter had to be held in quarantine. For six weeks, Maverick had to stay indoors in a kennel, and when the staff evaluated him, they determined he was too anxious for volunteers to handle. Fast-forward many months, and with Best Friends’ help, Maverick ended up on a cross-country journey that would — finally — lead him home. 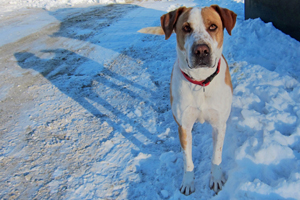 Maverick’s luck first changed when Rockwall Pets took him in from the shelter and addressed his health issues, as well as his emotional needs. The loving dog soon improved in body and spirit, but he still had a way to go before he’d find an adopter.

Christina Arriaga, executive director at Rockwall Pets, has a soft spot for the sweet dog. “We understood Maverick,” says Christina. “We know he is a good dog and he deserved a chance to find the perfect home.” But finding that home would be a challenge. Maverick was not only uncomfortable at adoption events, he’s choosy about his dog friends and has a high prey drive for cats. He sometimes acted out when he was overstimulated, nipping at his handlers. Maverick had been through so much already, but he couldn’t quite get over that last hurdle and into a home. So Rockwall Pets contacted Best Friends for help.

Networking to save a dog's life

Rockwall Pets is part of Best Friends’ No More Homeless Pets Network, a group of rescue organizations and municipal shelters across the country working to end the killing of animals in our nation’s shelters. A Best Friends staff person was assigned to Maverick’s case and quickly got to work finding a solution. After exhausting all local possibilities, staff began to look for opportunities elsewhere, and that’s the plan that produced results.

Erin Miner, web and volunteer coordinator at Franklin County Animal Shelter in Maine, says, “When we heard about Maverick’s issues, we were a bit hesitant.” But then they learned that Christina was willing to drive Maverick all the way from Texas to Maine, if the shelter would take him. Erin says, “What sold us on Maverick was Christina's dedication. Any dog that can inspire that kind of love was worth the work.” Christina loaded up Maverick and brought him to Maine, where the task of dropping him off was bittersweet.

A warm welcome and a new home for a deserving dog

Once Maverick settled in, the folks at Franklin County Animal Shelter continued to socialize him with car rides and hikes, and helping him safely encounter new situations. “We’ve had nothing but good experiences with him,” says Erin. 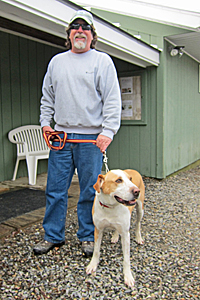 Then one day, while Bob Degone was waiting in the shelter’s parking lot while his wife was dropping off donations, he felt someone staring at him. Looking around, he noticed it was the dog in the last outside run. He approached the dog — Maverick, of course — who started wagging his tail. “I thought, ‘It’s a good idea to have a dog again,’” says Bob. He brought Maverick home that day.

Now when Maverick wants attention, he’ll just nudge Bob’s hand until he gently pets his head. Bob is an avid hiker and he takes his new dog on long walks in beautiful areas with sweeping vistas. Bob also has a mountaintop cabin where his whole family loves to commune with the great outdoors. “He’s had a few tough years,” says Bob. “But it’s only going to be great from here on out.”

It took help from Best Friends and many people, each committed to Maverick’s well-being, but now his future is filled with sunny skies and a family who loves him.

Be a part of the good news by giving a gift to the animals. You'll be helping our No More Homeless Pets Network partners, too.