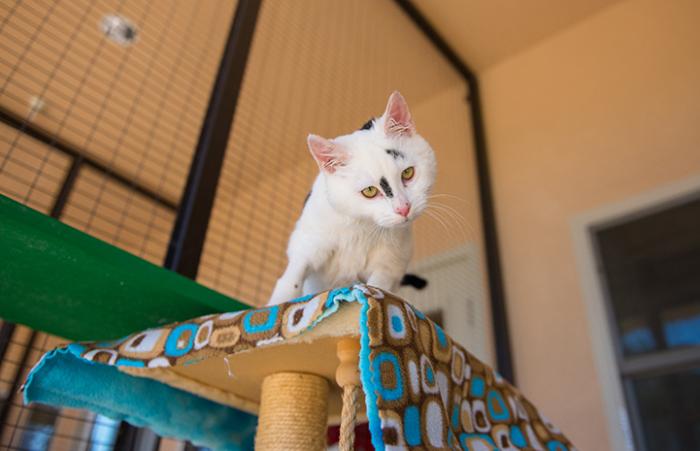 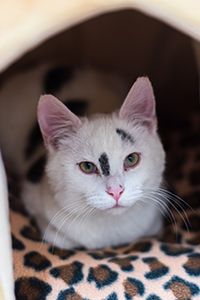 When Cookie was found, no one knew if he’d live another hour, let alone another day. The adorable white kitten with black cookie-sized spots was critically injured and barely clinging to life. He’d been hit by a car, and the driver had placed his seemingly lifeless body in a dumpster.

But Cookie’s heart was still beating, and somehow he made it through the night. The next morning, he summoned the strength to cry for help. A child heard his desperate meows coming from the dumpster. Soon after his ordeal, Cookie was on his way to the Best Friends Animal Clinic for emergency care.

Not only had two-month-old Cookie suffered severe head trauma from the car accident, but he’d also been left outside in the elements and was untreated for nearly 24 hours. The Best Friends veterinary team rushed in to give him emergency supportive care. But then, after they’d done everything they could, the only thing left to do was to wait and see if Cookie would pull through.

Signs and symptoms of neurological disorders in cats

The tiny kitten proved to be fierce fighter, battling his way back from the brink. But the trauma had taken a devastating toll. While he wasn’t in pain, Cookie had many signs and symptoms of neurological disorders. He couldn’t see or hear. He seemed disoriented and would quickly lose his bearings in a room. Though he could walk, he wandered around in large circles, raising his legs up like a high-stepping horse. He wasn’t able to use his litter box. And he would call out in loud, meowing cries until someone picked him up to comfort him.

Fortunately, the heartbreaking neurological defects weren’t necessarily permanent. As Jasmin Black-Regan, manager of the Best Friends Animal Clinic explains, it takes about six months after the injury to see where neurological patients will be for the rest of their lives. For Cookie, that meant he stood a good chance of overcoming some or all of the neurological dysfunction caused by his accident.

While they watched and waited for signs of improvement, The Best Friends veterinary team tended to Cookie’s every need. They made sure he could find his food and water and that he was getting enough to eat and drink. They monitored his incontinence and kept him clean. They figured out exactly what his limitations were so they could help him and measure his day-to-day progress. In some ways, Cookie had gone back to being a newborn kitten who had to learn some very basic things.

Within just a few weeks, however, Cookie began to come around. The feline neurological symptoms began to ease up. His vision and hearing slowly returned, and he no longer seemed lost in a room. Now, just over a month since his arrival at the Sanctuary, Cookie seems like a remarkably normal cat. He can eat, drink and use a litter box on his own, and the wobble in his walk is so slight you might not catch it unless you’re looking for it.

Cookie has done so well he’s even moved out of the clinic and into his own room at Cat World, where he’s turned into the extremely happy, loving kitten he was always meant to be. When his caregivers enter his room, he greets them with happy meows. And, when they pick him up, he wraps his arms around their necks, purrs in their ears and nuzzles his sweet little face against theirs.

Now that he’s got a great life ahead of him, it’s easy to forget that this bright little life nearly ended tragically. “He’s one lucky little cookie,” his caregivers say. 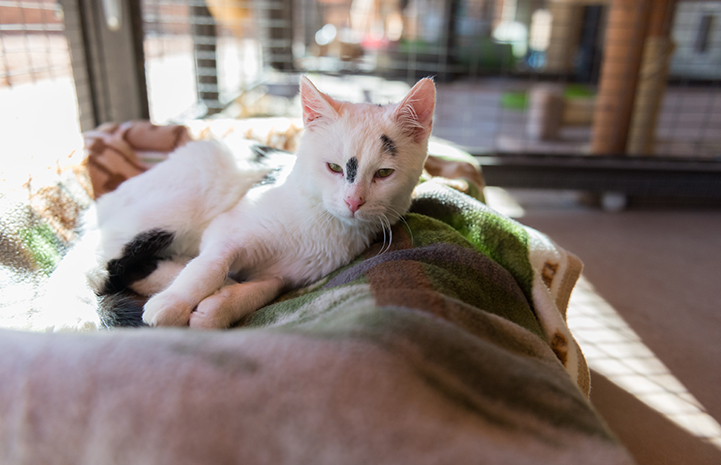 Support animals in need of help and healing