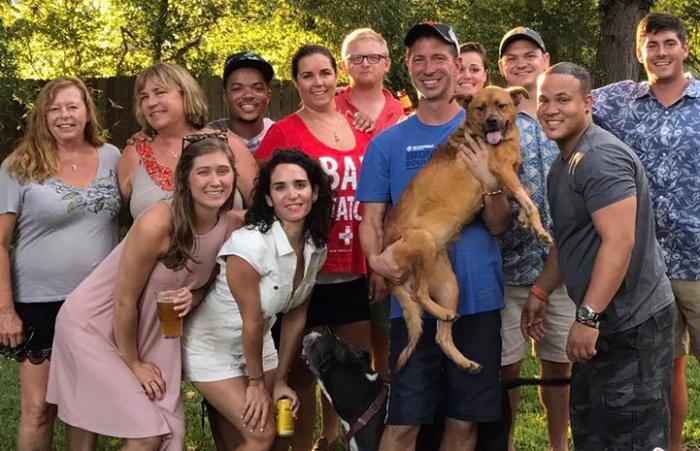 How Hershey the dog saved another dog in need

Being part of the Best Friends No More Homeless Pets Network gives animal welfare groups all across the country the tools they need to save more lives, as well as the chance to work together to Save Them All.

Best Friends has network partners in every single state, and each day all of them are saving lives. We never get tired of hearing their stories, and that’s why we want to share them with you, too. So today, we're proud to present one from Charleston Animal Society in North Charleston, South Carolina.

Marley the dog has recently grown accustomed to sleeping next to a human who adores her, along with two other dog buddies in a comfy bed outfitted with high-end sheets. Her life now is a far cry from what it was just a month ago.

That good life is hard-won. In mid-May, Marley was found tied to a fence in North Charleston, South Carolina. She was in such bad shape that the folks who discovered her at first thought Marley might not survive. The sweet dog was skin and bones. She was covered in fleas and ants. And she was so weak, she couldn't stand.

Marley was rushed to Charleston Animal Society to be stabilized, then brought to another vet clinic for emergency care and a blood transfusion. The blood transfusion not only saved her life, it helped another dog find his happy-ever-after, too.

In order for a dog to get a transfusion, there must first be a dog who can donate blood. At Charleston Animal Society for Marley’s emergency case, that dog was Hershey.

Hershey had been in the shelter for just a few days before Marley was found tied to a fence. The chocolate Lab was chosen to be Marley's blood donor because of his good health and large size. It just so happens Hershey is also very handsome and has a jolly, easygoing, engaging personality.

So when a local television station covered Marley, who was fighting for her life, Hershey accompanied Kay Hyman, Charleston Animal Society spokesperson, on set for the interview. And as Marley’s story spread, Hershey also made appearances at a few radio stations.

A very bad flea infestation can cause anemia, and that was the immediate challenge for Marley to overcome. "She did come close to dying," says veterinarian Lucy Fuller, Charleston Animal Society's senior director of veterinary care. "If she had not received the blood transfusion, she would probably have died that night or the next day."

Thanks to excellent care and blood transfusions from Hershey, Marley did survive. She got stronger each day and was soon well enough to go into a foster home where she could recuperate ― not just in comfort, but in a bit of luxury as well.

Marley went to live with foster volunteer Jason and his two dogs, Emma and Lulu who, over the course of the last few years, have welcomed about 40 foster dogs into their home. Jason prefers to foster the dogs who have stories that aren't so happy ― the ones who really need to be shown how good life can be.

Emma and Lulu have been just as eager to help out. "They're great at welcoming them," Jason says.

During her time with Jason, Emma and Lulu, Marley has been eating three meals a day, putting on weight and getting stronger. She has become great friends with Emma and Lulu, as well as another dog down the street.

She's been enjoying trips to the beach and walks in the park. Over Memorial Day weekend, Marley was the guest of honor at a party thrown by Jason.

The police have not been able to find the person who neglected and abandoned Marley. But Jason says, “She's doing fantastic."

Marley at first seemed to be confused by living indoors, wasn't house-trained and had no idea about couches and beds. But Jason says that after just a couple of weeks, she's developed a rather refined taste: Egyptian cotton.

"I feel very bad for the person who gives her a permanent home because she's got high expectations," he jokes. "She seems happy as she can be."

Hershey gets a taste of the sweet life

That happiness has also spread to Hershey, the dog who helped save Marley's life.

On the day a television station filmed Marley’s story (with Hershey appearing on the show as Marley’s blood donor), three people expressed interest in adopting Hershey. And by the time Kay and Hershey got back to the shelter, those three persons were waiting and ready to fill out adoption applications.

That’s how Hershey went home with a family, and now has a big yellow Lab for him to pal around with.

With that kind of attractive personality, no one doubts Hershey would have been adopted, even without going on television. But that doesn't change how sweet it is that Hershey could donate blood to Marley and then, as Kay says, “get a new home just one day after he gave Marley her life back.”