These days, four-month-old kitten William Pear can leap into the air and pounce on a cat toy, and three-month-old Sadie can zoom around after a ball in a track and hold her own during play dates with much bigger cats. Although they move in different ways, both kittens are lightning-fast and love to play. But when they first came to Best Friends Animal Sanctuary, their futures were uncertain. Sadie and William Pear needed months of TLC and physical therapy to grow into the happy, healthy kittens they are today. And that’s what they got.

Paralyzed kitten comes to the Sanctuary

When she was about four weeks old, Sadie was found in a yard unable to walk. If she hadn’t been rescued by a good Samaritan, she almost certainly would not have survived. She ended up in a small rural shelter, where it quickly became clear that the tiny kitten’s back legs were paralyzed and she was incontinent. She was otherwise healthy, but she needed specialized care.

When she arrived at the Sanctuary, Sadie didn’t appear to have been recently injured, so no one knew if she’d had an accident shortly after she was born or if she was born this way. An examination at the Best Friends Animal Clinic revealed some bad news: Sadie probably wouldn’t be able to walk like other cats, and she may always be incontinent. But the good news was that she wasn’t in any pain, and that Best Friends veterinarians and caregivers at Cat World were going to make sure that she would have as much mobility as was possible. 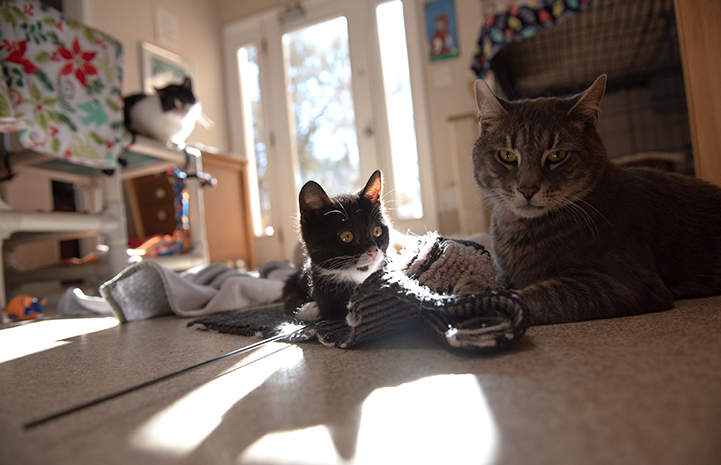 Sadie started veterinary physical therapy right away. Twice a day, her caregivers would help her through a set of exercises aimed at improving mobility. They did range-of-motion exercises to keep her joints flexible and strong. Because she tended to point her little toes like a ballerina, her caregivers gently eased her feet into a more natural (flat) and comfortable position.

Since Sadie mainly uses her front legs to get around, her physical therapy included exercises to both strengthen and reduce the amount of strain on her neck. She also enjoyed soothing neck massages to round out each session.

Although Sadie will likely always have mobility challenges, she can chase a ball around a track and bounce around to play with cats twice her size. “She has a lot more movement now than she had when she first came (to Best Friends) and she is super fast,” says Cat World caregiver Tina Sylvester.

William Pear’s turnaround was even more dramatic. Like Sadie, he came was about a month old when he arrived at Best Friends. At the time, he and his littermates had a serious parasitic infection, and he was the one struggling the most. 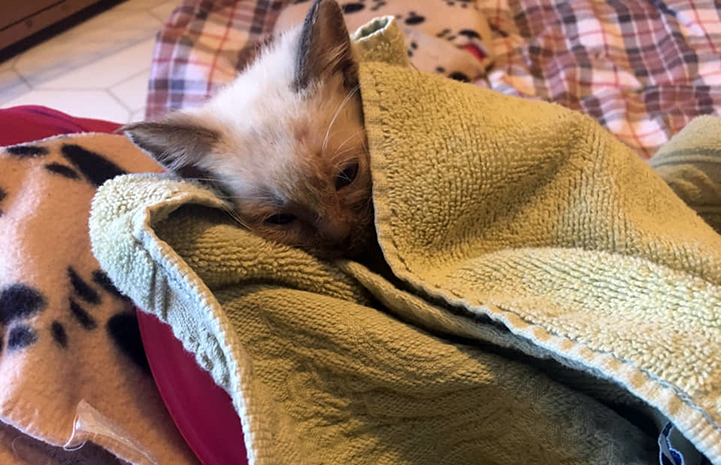 Best Friends vets treated William Pear and his siblings for the parasitic infection, and they slowly started to recover. The problem was poor William still felt so sick that all he wanted to do was curl up and sleep. But curling up in a ball meant that he wasn’t moving around much and that caused him to lose most of the muscle mass in his back legs. It also meant that his heart and lungs were getting weaker, rather than growing stronger. When he did move, he would get winded quickly, and that made him want to sleep even more.

At the Best Friends kitten nursery, supervisor Janice Dankert and the nursery staff knew that the little Siamese mix kitten would need a lot of extra help to grow into a healthy, happy cat. So they began doing feline physical rehabilitation with him. 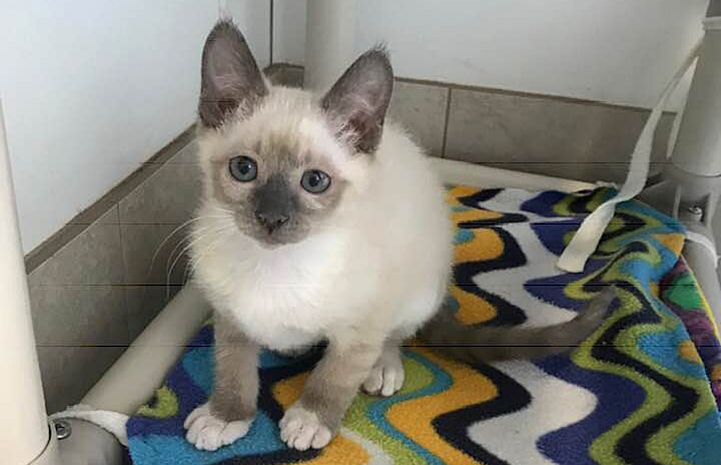 Janice, who began fostering William Pear in her home, explains: “His back legs were sore, and he didn’t want to use them. The goal of the physical therapy exercises was to re-build some muscle mass. We would extend his legs out and have him pull them back in. We were also trying to encourage him to walk, stand on and use those back legs. Part of the exercise program was to strengthen his heart and lungs.”

It took a few months, but the physical therapy worked wonders. William Pear got up and started walking. At first his legs were weak and wobbly beneath him, but every day, with every step, they grew stronger. As he moved and began exploring his world, his lungs and heart grew stronger, too. Soon, he was racing around the room chasing wand toys and having a ball with the other kittens.

It wasn’t long before both William Pear and Sadie, their lives happily back on track, were scooped up and whisked away to new loving homes.

Donate to save pets like Sadie and William Pear 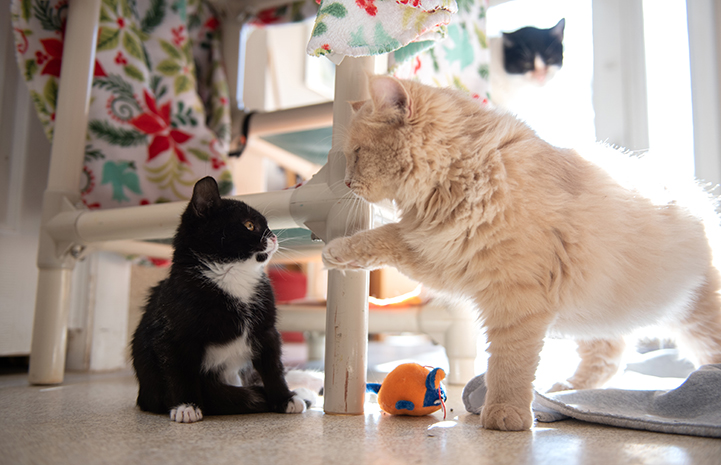 Photos by Molly Wald and courtesy of Janice Dankert