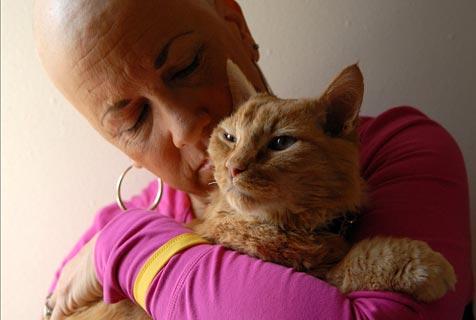 When Valerie Schumaker of Massachusetts walked into Kitty Motel, her home away from home at the sanctuary, the first thing she noticed was a caregiver carrying an armful of pink bandanas. "It was kismet," says Valerie. By way of explanation, several employees at Best Friends are currently battling breast cancer. The pink bandanas are to help show support.

The fact that Valerie’s first encounter in this building was to see those bandanas is indeed appropriate. She herself is battling breast cancer. Further, in this particular visit she just so happened to be seeking out a special cat with whom she has shared quite a bit in common these past several months.

Valerie has been visiting and volunteering at Best Friends at least once a year since 2001. (Most years she comes two or three times.) "I love it here," Valerie explains. During these visits, Kitty Motel — one of the cat buildings at the sanctuary — has been her favorite stop all along. Preferring to work time and again with cats in a single building rather than spread her visits around, Valerie has been able to form very close relationships with many of the cats in Kitty Motel.

One such cat is Wrigley, who is now in the Guardian Angel program. Valerie remembers Wrigley as always being king of the castle in his room. He had this huge lion’s mane of hair going on, and he had enough attitude for three cats combined. She loved him from the start.

Back home, Valerie’s whole world turned upside down on August 27 of last year. She was diagnosed with an aggressive form of breast cancer. Valerie was devastated.

"To me, cancer equaled death," she explains. She has a good reason for feeling that way. Two years ago, she lost her husband to cancer. He was diagnosed and then gone ten weeks later. Before that, she lost one of her cats to cancer. Her initial reaction to her own diagnosis, based on such painful personal experience, was a dreadful certainty that her days were numbered.

And then she heard about her old pal Wrigley.

Wrigley was diagnosed with cancer, in his case lymphoma, within weeks of Valerie. Suddenly, she wasn’t in this alone. She started to take hope. Valerie and her longtime friend Wrigley set on a path together where they would share more than a few parallels.

He had four months of chemo, and so did she. His chemo sessions were on Thursdays, and so were hers. Wrigley lost most of his whiskers, Valerie lost most of her eyelashes and eyebrows. Much of his fur fell out, and all of Valerie’s hair fell out.

Cancer remission for woman and cat

On that final point, there’s yet another similarity. Valerie once had extremely thick, curly locks. She jokes now that even if only half her hair grows back she’ll still have more than she needs. So the cat with the huge fur and the lady with the thick hair went through another struggle together. If that weren’t enough, here’s another unusual link in their progress together. Within one week of each other, Valerie’s doctor, and Dr. Patti (Wrigley’s doctor) each pronounced their respective patients to have no outward signs of disease.

Each still has preventative medical care that will continue over the next year — again, more similarities.

All along, Valerie took courage from the fact that her friend was going through the same struggles. She believed they could both pull through together. And after she and Wrigley were both pronounced to have no evidence of disease, Valerie knew she had to see him again. As soon as she felt up for the trip, she came out to visit Wrigley and all her other friends at the sanctuary. Not just cats, either. The caregivers know and love her too.

Valerie hardly recognized Wrigley at first, but she soon realized that deep down he was still the same charmer she fell in love with. This time, Valerie wanted to take him on a sleepover. For a while there the vets weren’t sure whether he could be cleared to go. But by the time she arrived, he was doing well enough that they approved. This turned out to be his first ever sleepover.

"He was wonderful!" she said. He even crawled under the covers. Not bad for a first-time sleepover cat!

There is one final detail that shows the link between them. In her personal blog, Valerie commented before her recent trip to the sanctuary that she and Wrigley were going to "march into remission, hand in paw." Imagine her surprise when, on the sleepover, Wrigley snuggled in close and placed his paw gently but insistently in her hand. They truly were in this together!

For the first time since being diagnosed, Valerie says she was able to forget all about cancer during her stay at the sanctuary.

Check out the Best Friends resource section on cat health.