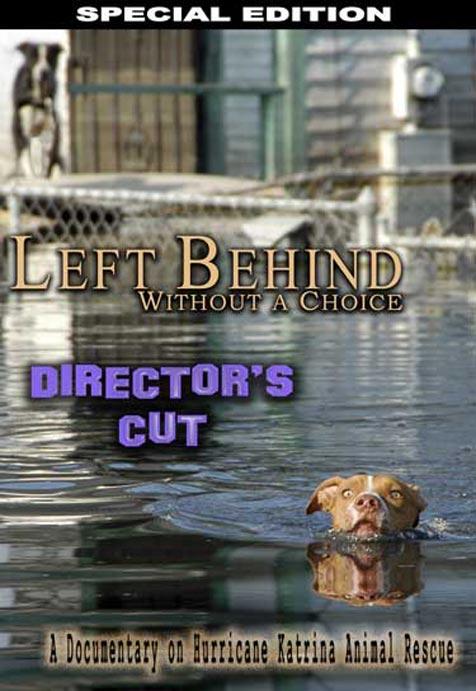 It was a disaster of epic proportions, and the campaign to rescue animals in Hurricane Katrina’s wake was equally epic. Three years later a new documentary called "Left Behind Without a Choice" recounts that heroic campaign through those who were pivotal in saving the lives of thousands of pets who endured Hurricane Katrina and were stranded in its aftermath.

The rescue drew hundreds of volunteers from around the world to help out in the temporary shelters erected by numerous rescue organizations, among them Best Friends. Director, producer and writer of the documentary Kim Walsh-Borgan of Minneapolis, Minnesota, was one of the volunteers at Best Friends’ base of operations in Tylertown, Mississippi. She made three separate trips.

On her second trip to Tylertown, Kim, who was working back in Minneapolis in advertising and had done some previous work as an assistant director, brought a video camera along to document the trip and capture the plight of the animals Best Friends was rescuing.

"It wasn’t until later that a friend said, ‘Why don’t you make a film about the rescue?’" she says. She decided she would.

But she only envisioned it as a short film – that is, until word about the project got around among animal lovers in Minneapolis. People started calling Kim to volunteer their time and expertise, expertise such as directing, editing and musical composition. As a result, she was able to make an 86-minute, independently financed film.

"Left Behind" documentary about Hurricane Katrina

"Left Behind" chronicles the rescue through the eyes of the volunteers, and of several Best Friends founders and staff who played pivotal roles in the operation, including founders Michael Mountain, Francis Battista and Silva Battista, as well as Best Friends animal behaviorist Sherry Woodard, trainer John Garcia, animal operations manager Jeff Popowich and dog caregiver Ethan Gurney. Many of the interviews were shot at Best Friends Animal Sanctuary.

"My goal in making the film was to make people understand that one person can make a difference," Kim says. "I also wanted to get the message out that even though it’s been three years since Katrina, there are still animals who need help."

"Left Behind" also deals with the lasting emotional trauma that many of the animals suffered, and how Best Friends and hard-working volunteers have nurtured those animals back to good health.

The work of Best Friends is possible only because of your generous support. Please join us to help the animals.