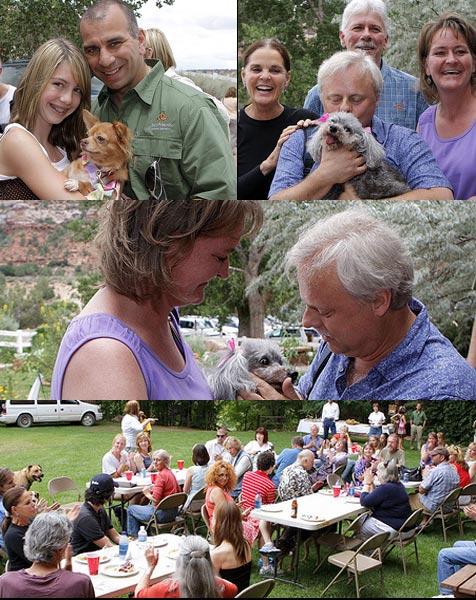 They’re not unlike battle buddies, these people who came to the rescue of the animals who were lost and abandoned after Hurricane Katrina slammed into the Gulf Coast three years ago.

Together, they survived the elements, the long working hours, the lack of sleep. They shared tears of sorrow over animals too far gone to be saved, and tears of joy for animals reunited with their people.

Some of the Katrina rescuers were reunited Saturday at Best Friends Animal Sanctuary in southern Utah. They’d traveled from all over the country to help celebrate the national release of Best Friends writer Cathy Scott’s new book, "Pawprints of Katrina: Pets Saved and Lessons Learned."

Many of them brought the animals they’d saved, and later adopted. These are the people and animals behind the stories in "Pawprints of Katrina," and some of them hadn’t seen each other since the rescue. To see them together again, it was clear they share a bond that cannot be broken by time or distance.

One of them was Cliff Deutsch, who traveled to Utah from Florida with his wife, Maureen, also a Katrina volunteer, and daughters Faith, 12, and Brittney, 10. "It’s very emotional," Cliff says about seeing his fellow rescuers again. "You build a bond that stays with you the rest of your life."

At the time the hurricane hit, Cliff was a sergeant heading up the K-9 unit for the Collier County Sheriff’s Department in Naples, Florida. "I’d seen how much dogs had given to people," Cliff replies when asked why he volunteered for the rescue. "I thought, ‘Now it’s time for me to give back to them.’"

In the photograph that graces the book’s cover, Cliff is kneeling down and looking into the wide brown eyes of an English cocker spaniel he’d just rescued. That moment in time was captured by Best Friends photographer Clay Myers, who took the 70-plus photos featured in the book. Like Cathy, he also played an active part in the rescue.

Happy endings for animals featured in "Pawprints of Katrina" book

Looking at the people and animals gathered at Saturday’s festivities, it was easy to see that there are many happy endings in "Pawprints of Katrina." Marina the poodle, dubbed "the survivor," was all fluffy and perky, sporting pink ribbons on her ears. She looked nothing like the frightened, emaciated, soot-covered dog that Clay and volunteer Mike McCleese rescued from the yard of a St. Bernard Parish home three weeks after Hurricane Katrina hit.

"If it weren’t for Clay and Mike, she wouldn’t be part of my life," says Mary Salter, the Katrina volunteer from Minnesota who adopted her. "When I first saw her, I didn’t think she was going to live. Now, she runs the household and everyone in it. I don’t remember life before Marina."

Marina spent Saturday cradled in the arms of her rescuers.

Mike, who owns a business called A Guy and His Dog Landscaping in Cincinnati, Ohio, admitted he got teary-eyed reading "Pawprints of Katrina." He decided that if someone saw him crying and asked what was wrong, he’d tell them, "It’s not about what’s wrong. It’s about what’s right."

German shepherd Otoe Thibadoux Notoe Bob Barker relaxed on the Best Friends Welcome Center lawn with his person, Katrina volunteer Cat Gabrel. Rescuers found him locked in a car almost a month after Hurricane Katrina hit. They had no idea how long he’d been there. The Bob Barker part of his name came from the fact that he barked almost nonstop after being rescued. Now safe, happy and relaxed in his forever home with Cat in Colorado, the nervous barking has gone away.

Other Katrina dogs who attended Saturday’s affair with their people included Chihuahuas Mia, who makes her home with Cathy, and Lois Lane, who was adopted by Best Friends adoption coordinators Pat and Larry Donoho. Katrina volunteer Barb Davis traveled in from Nebraska with dachshund mix Precious, and Pam Smith traveled from Alabama with her Chihuahua, Ginger.

There were lots of hugs Saturday as these Katrina volunteers shared their memories of the rescue that brought them together and bonded them forever.

"There’s a special bond you form in a disaster environment," says Shari Timberlake, who attended the get-together with her sister, Stephanie, also a Katrina volunteer. "It’s like a war in some ways. There are things you can’t share with others who didn’t experience it firsthand. It was life-changing."

Find out how Best Friends is helping with the Hurricane Harvey animal rescue efforts in 2017 and 2018.