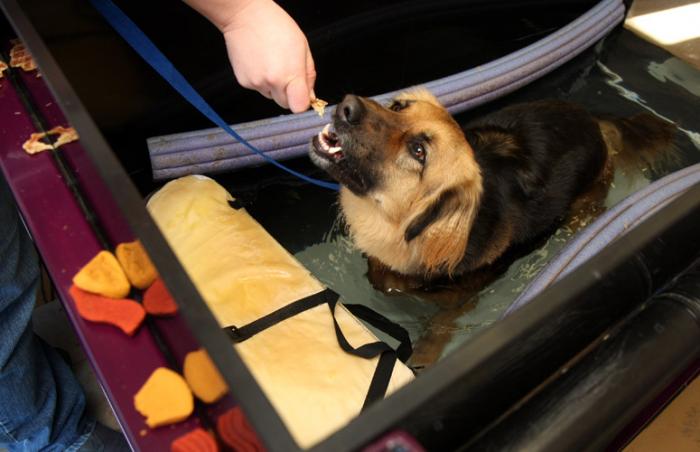 Hydrotherapy for various species of animals 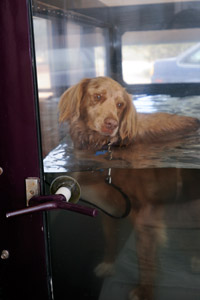 At the Best Friends fitness center, water therapist Heidi Myers is cheering on an overweight black Lab mix named Archie. Archie is in the hydrotherapy tank, trotting slowly on the underwater treadmill. The therapy is part of his weight loss routine, though Heidi is able to use pieces of (diet) kibble to motivate him to keep trucking along. His tongue lolls out, and he looks happy but tired, as if he were just finishing a trail run.

During each hydrotherapy session, Archie does three repetitions: four minutes actively walking or running on the treadmill, followed by a two-minute break, followed by four minutes on the treadmill, and so on. It is the same routine that Heidi uses for post-surgery dogs, 95 percent of whom have had knee surgery. These dogs get the highest priority for time at the fitness center, though those with disorders, such as hip dysplasia or age-related arthritis, are also regular visitors to the hydro tank.

Heidi explains that post-surgery dogs usually come to hydrotherapy for about six months, after which most of them are back to their normal physical condition. Some of the older dogs, however, may take longer to rehabilitate. And dogs like Archie come as long as necessary to get down to their ideal weight. Thanks to the hydrotherapy, Calvin, an Australian shepherd mix who came to Best Friends back in May, weighing 89 pounds, is already down to 68.2. He'll have to keep walking, though, in order to reach his ideal weight, which is somewhere in the mid-50s range.

Bigger dogs, like Archie, and even the mid-sized Calvin, can walk pretty fast on the treadmill. But Heidi is careful not to overdo it; she sets the speed according to a dog's size, stride and physical ability. As a therapist, she is pretty hands-on, even climbing into the tank herself if a dog is new to hydrotherapy and hesitant. In those cases, Heidi puts her feet on either side of the treadmill, while the dogs walk, and she uses a belly sling to help hold them up until they get their sea legs. 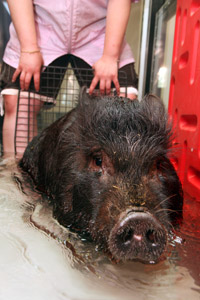 Though Heidi's patients are mostly larger dogs, a few little ones have come in too. "It's almost easier to make the little ones swim," rather than walk on the treadmill, says Heidi, describing how she puts lifejackets on them and uses treats to get them to swim in circles.

That calls to mind one of Heidi's favorite former clients, a pig named Pepper. Poor Pepper had had extensive shoulder surgery, and her recovery was going very slowly because she was reluctant to move. So the vets at the Best Friends clinic prescribed hydrotherapy. However, Pepper, like most pigs, had really short legs, and she could not keep up with even the slowest speed on the treadmill. So her caregivers came up with the idea of using peanuts to entice her to swim in circles around the tank. After only one session, Pepper's caregivers noticed an increase in her mobility.

Then there was the baby miniature horse named Luna. Luna had been accidentally run over by a trailer before coming to Best Friends. After some extensive surgery, it was time for hydrotherapy.  Luna "did awesome," Heidi says. "She walked for a full six minutes her first time, and she really took to (the hydrotherapy)." Because of her young age and her timely therapy sessions, Luna was able to make a full recovery and was later adopted.

Hydrotherapy isn't for everyone. Not all of the animals who attend hydrotherapy are fans of the tank. But it's an amazing benefit to the animals at the Sanctuary who need it. And for the animals who take to walking in the water, it can definitely get them farther down the road to health and wellness.

Learn more about Calvin, Archie, or other adoptable dogs at the Sanctuary.