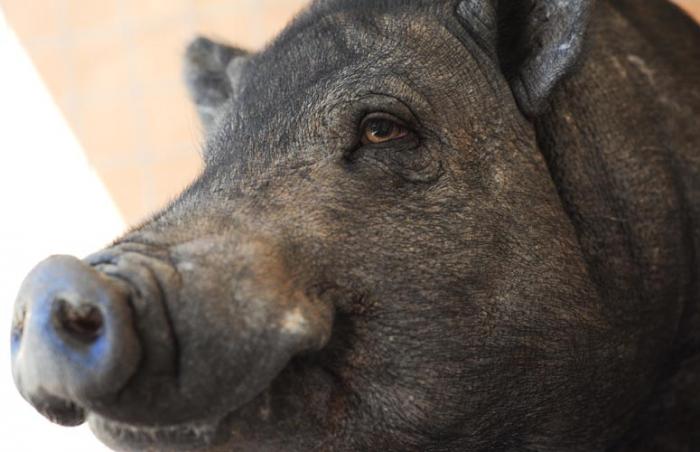 Sometimes, it takes a little while to find the right friends. Tobias was once a pig without many friends. Purchased from a breeder, he lived with his people in a house for the first years of his life. But since he didn’t live with any other pigs and wasn’t properly socialized, Tobias couldn’t stand to be around them. And he made that crystal clear after losing his home and coming to the Sanctuary. 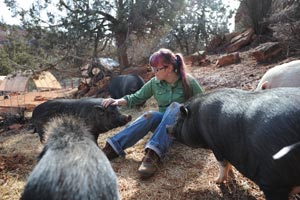 In the wild, pigs live in groups and derive immense benefits from each other’s company. They’re prey animals, which means they’re always on the lookout for danger. So, when they’re by themselves, they can become fearful and suffer from frustration and high anxiety.

That’s why the pigs at Marshall’s Piggy Paradise live in a community setting. It’s an idyllic place where groups of pigs (the largest is currently 22) live together peacefully and bask in the desert sun all day long. Although Tobias exhibited all the symptoms of an isolated, frustrated pig, he wanted nothing to do with the piggy community. If other pigs came up to meet him, Tobias would chase them away.

So, for a while, Tobias lived alone. To alleviate his boredom and frustration, his caregivers played with him and taught him tricks. Pigs are highly intelligent; they can be just as smart as dogs. This super-smart pig picked things up very quickly, and, in no time at all, he was able to do all kinds of fun things, such as sit, shake hands, climb up on pedestals and ramps, do figure 8s, walk on a harness and leash, and ride in the car. Tobias soaked up his schooling like a sponge.

But what his caregivers wanted most for him was some piggy companionship, because, even after all the training and playing, Tobias was still frustrated. He expressed it by getting grumpy and mouthy with people every now and then. His caregivers knew he would be happier if only he would accept a porcine friend. So they began to handpick pigs who might mesh well with Tobias — pigs who would make it clear to him that they weren’t interested in doing battle, but they’d be friends if he’d let them. 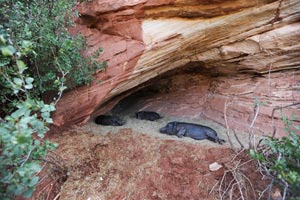 As it turns out, Tobias does like other pigs. He’s just very selective and has strong preferences for some over others. Caregivers slowly introduced him to two pigs at a time, until he found a pair he could live with. Milli (short for Millicent) and Maisy are sisters who are somewhat timid around people. The one-and-a-half-year-old girls hadn’t had much exposure to people and were shy around them. Tobias could actually help them in that area.

So, while Tobias fell in love with his new friends, he taught them a thing or two about interacting with people. Now, Milli and Maisy have human friends, and Tobias is enjoying the company of his own kind. And that makes each pig in this little posse the way they’re meant to be — happy.

To bring hope and healing to more animals like Tobias, become a Best Friends member.