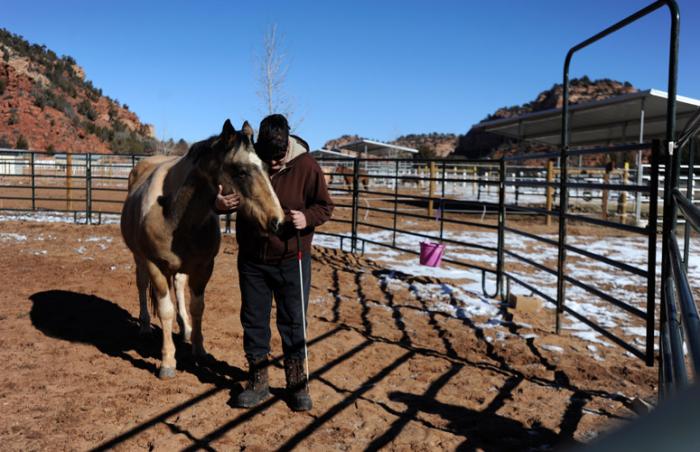 Introducing a horse to a halter

The greatest book in the world is not much more use than a doorstop to someone who hasn't yet learned to read. You have to master the ABC's before you can tackle more complex material. For Dillon the horse, one of the most basic ABC's - learning to wear a halter - was something he hadn't yet figured out. "You'd go to halter him and he'd be ready to run," explains Best Friends horse trainer Ann Hepworth.

Not many details are known about Dillon's past. He came to Best Friends after being seized from a criminal neglect situation. What was clear, however, was that Dillon had enough bad experiences with a halter that he didn't want anything more to do with them.

Introducing a horse to a halter

"We're starting from scratch with a horse that really hasn't had a lot of handling," says Jen Reid, Best Friends horse manager. At the Sanctuary, part of starting from scratch means always putting the relationship first. You have to build trust. As Jen explains, "Once we know the ABC's, we can move from there."

Dillon needed to learn that a halter isn't anything worth getting worked up over. Learning this concept is crucial. "It sets the tone for everything else," says Ann. For instance, if you have to chase a horse and catch them every time you want them to wear a halter, they're going to associate bad things with the process. "I don't want to go out there and catch him," Ann says. "I want him to catch me."

Using a few basic techniques, along with some tasty cookies that Dillon loves, trainers and caregivers at Best Friends have already helped Dillon immensely when it comes to the halter.

At first, Dillon was required to lower his head and allow Ann to put on the halter before he'd receive a cookie. For his part, he figured in those early days that simply stretching his neck out toward the halter should be enough. But no, it had to be all the way on before he received a treat. He caught on quickly.

From there, it didn't take long for Dillon to rethink his stance on the whole halter situation. "Now I'll put the halter out in front of his nose and he takes it and tries to put his head in," Ann explains. "He's now participating in haltering himself. He's saying, 'Get that halter on me and give me a cookie!' "

Communicating with a horse

Dillon's nature is such that if he doesn't see the point in doing something, he's not likely to want to do it. It might be easy to watch behavior like that and come to the mistaken impression that such a horse is simply being stubborn or lazy. Dillon, however, is nothing of the sort. He just needs to feel safe, and comfortable, and understand why something is worth doing. To that end, he's making quick progress.

Best Friends horse trainer Linda Alvey has been impressed with him from the start. "The first time I met and interacted with him I loved his brain," she says. "I think he is a very sensible horse down under the skepticism."

Dillon is learning his ABC's, alright. And once he gets the basic language down, a whole new world will open up for him.

Learning how to communicate with horses starts with understanding what makes them tick. Watch the brief video Horsenality at Best Friends (third video on page) for a description of one simple but powerful way Parelli Natural Horsemanship is used at Best Friends.