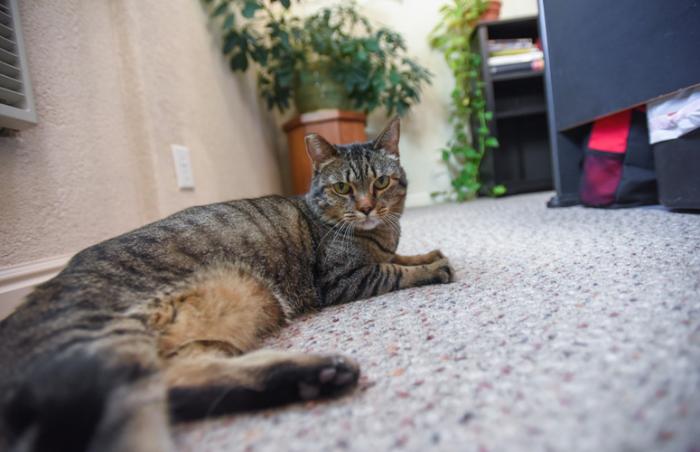 A job for Lola the timid tabby cat 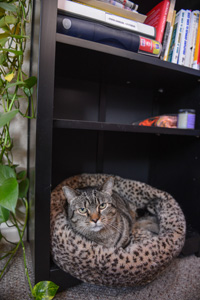 When Lola first arrived at Best Friends, she avoided all the things that most cats love to do, like exploring the spacious outdoor catteries, rafters, toys and cat trees. Nothing interested her, and within hours of moving in, Lola picked a spot in a wall cubby. Once she climbed into it, she didn’t want to come back out.

Lola treated the space outside her cubbyhole as if it was only for absolute necessities like quick trips to the water bowl, food dish or litter box. But as cozy as her cubby was, she was missing out on the best parts of being a cat. After all, the sweet brown tabby couldn’t chase a feather toy, lie in the sunshine or get pets from visitors and volunteers when she was hiding all the time. And she’d have a harder time finding a home, too. But that was about to change.

Tuesday’s cat in the office

Not long after Lola arrived, a part-time “job” opened up in the Best Friends animal care administration office. Each weekday, the office hosts a Sanctuary animal (usually a rabbit, dog or cat) for special attention and one-on-one time. When another animal got adopted, a spot became available and Lola was a shoo-in.

Going to the office, however, meant she had to venture out of her comfy cabinet and meet some new people in an unfamiliar place. Understandably, she was a bit hesitant the first time. She dove behind the refrigerator until she could get her bearings.

Find out about the cats at Best Friends

Soon, though, Lola’s curiosity overcame her fears. She took a few steps out, and then a few more. She decided the bookshelf would do nicely as a substitute cabinet if she needed it. But after more exploring, she discovered that the big, sunny windowsill, with its amazing view of the Sanctuary, was the best place to be.

Now after only a few office visits, Lola is out and about a lot more. Not only does she explore the large office and lounge on the sun-soaked windowsill, she’s let her guard down enough to roll around on the carpet and ask for belly rubs. After scrunching her body up into small places for so long, Lola can finally stretch out all the way. Lying on her side on the carpet, she stretches her front and back legs out so far that her back curves into a perfect arch — the exact opposite of the tight ball she used to curl up in whenever people were around. 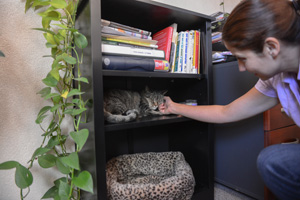 “She’s much more relaxed and affectionate now,” says Michelle Weaver, director of animal care for Best Friends. “Her office visits help her learn to come out of her shell in a different environment. She gets socialization and a new space to run around in. It also helps us see more of her personality, so we can give more information to potential adopters.”

Since Lola began weekly office visits, things have changed for her back in Cat World, too. Now she reserves her cubbyhole just for naps. And she’s often the first cat visitors see when they walk into the building, because Lola has taken to stretching out right in the middle of the lobby floor — no longer afraid, and utterly happy.

Consider a donation gift to help animals in need