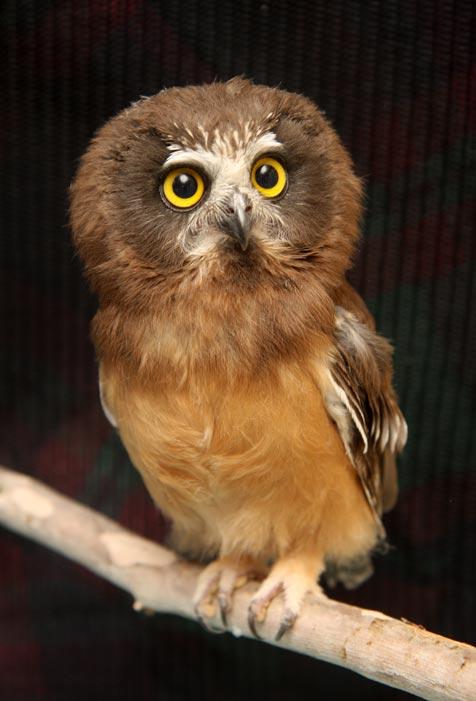 A fledgling Northern saw-whet owl who recently arrived at Best Friends makes it extremely difficult to do the right thing, which is not to scratch, play, hug, and basically love on the bird to your everlasting heart’s desire. What with the helmet-like head of downy feathers, the big blinking eyes, and the little chirp-chat he conducts, this guy is heartbreakingly cute.

The saw-whet came to Wild Friends, the wildlife rehabilitation center at Best Friends, from a family in the area who had found him abandoned. They took the bird in, fed him, and let him perch on their shoulders and hang out inside their house, among their dogs no less. Unbeknownst to them, they were hurting his chances of ever being released back into the wild. Though they cared for him only two weeks, it was enough time to habituate the owl. He now solicits, demands even, attention from people, making it even harder not to coddle him.

Wild owl is not so wild now

The saw-whet isn’t yet old enough to be on his own in the wild, but even if he were, he’d have little chance of surviving. "He’s way too interactive," says Carmen Smith, licensed wildlife rehabilitator and manager of Wild Friends. "It makes him cute, but not good for the wild." The owl would most definitely gravitate to people and places where they congregate—never a safe bet for wildlife.

Carmen and the staff at Wild Friends now have a tough task ahead of them—to break the owl’s desire for human attention while keeping him healthy. They can’t simply let the saw-whet go cold turkey and off human attention all together, because he might experience withdrawals and depression so extreme that he might stop eating. Carmen will have to wean him off humans slowly, decreasing the amount of time the bird is even around people. "At some point, he can’t be hearing, seeing, or even smelling people. There has to be a sense barrier." If all goes well, the saw-whet will one day be so unaccustomed to people that he’ll be fearful of them. That’s when he’ll have a much better chance of surviving in the wild.

In the meantime, Carmen is on the lookout in other wildlife rehabilitation centers for another saw-whet owl—to keep him company, and remind him who his real kin are.