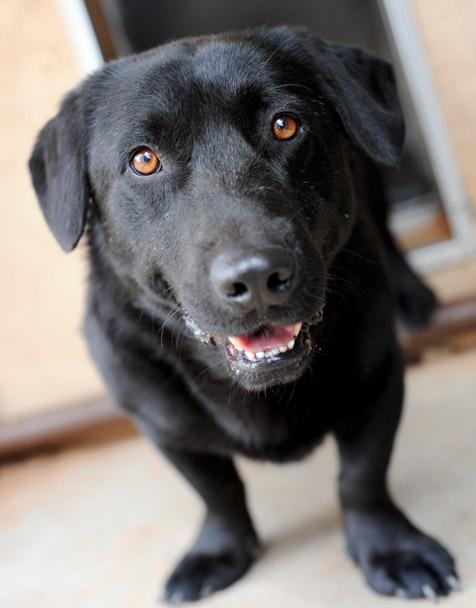 King of the road

Living in a crowded hoarding situation with over 100 other dogs, Wagner the dog didn’t receive much in the way of quality time with people. As a result, he developed a severe shy streak toward humans. He apparently also didn’t go on many car rides. No big surprise there. On his car ride to the Sanctuary, for instance, Wagner was not a happy camper. Not one bit.

A regular volunteer at the Fairway, one of the dog areas at Best Friends, met Wagner and decided she wanted to try and help him overcome a little bit of that bashful nature, in particular his resistance to car rides. "He was just really, really shy," explains Moira Patterson. Moira is a retired schoolteacher from Prescott, Arizona, who’s been volunteering at the Fairway several days a week for more than three years now.

Moira knows that car outings can lead to sleepovers, which can then lead to adoptions. Ever brought an adorable dog into your home for a night and then tried taking him or her back the next morning? That can be the very definition of willpower!

Moira also realized car rides couldn’t happen until he was more comfortable with the concept. She decided to do a bit of a litmus test, as it were, after she’d gotten to know him a little. By this point, the two of them had developed a rapport. Moira had been spending time with Wagner, taking him on walks and playing with him in his play area. When she tested Wagner on his willingness to go on a car ride, however, she ran smack into a wall. 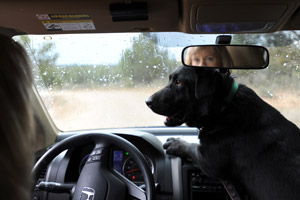 It's always part of the ride to get Wagner to move
into the back seat before the car starts!

He’d been strolling along just fine until he figured out that the whole one-step-follows-another routine was, this time, taking him straight to her vehicle. He threw on the brakes, backed up, and did a complete body roll. Hey, at least the guy knows how to communicate loud and clear! No need to second-guess what’s going through his mind.

Moira remained undaunted. She’d simply try another approach. For the next attempt, she had a new plan. She’s discovered from working with other dogs who don’t like car rides that if she opens up both back doors, it can feel less threatening them. There’s something about having a visible escape route that makes it easier for them to climb in the car in the first place.

With both doors wide open, Moira climbed into the backseat of her car first. Slowly, cautiously, she coaxed Wagner in with her. First, she could only convince him to place his front legs in the car, yet eventually she got the rest of him in as well. Moira spent time visiting with Wagner once he made it into the car, reassuring him that everything would be alright. Next, she climbed up front and they went for a short drive, and then returned promptly to his play area. Slow and steady.

She kept up this routine. Before long, Wagner began to piece two and two together. Car rides weren’t so scary. In fact, they were pretty darn fun! By the third such outing, Wagner climbed in without any coaxing. Of course, it helped that Moira always brought him to fun places. One such outing was near a local golf course. "He did fine," Moira says about that outing. "He found himself a super muddy puddle to play in."

Soon, Wagner began getting excited about car rides. "He realizes car rides are fun," says Moira. "Now he’s super busy in the car!" Where once Wagner used to hunker down and wait quietly until the car ride was over, now he zips and zooms from front to back, side to side, even if it’s just a quick ride around the Sanctuary.

The best part is that these skills have transferred to all cars, all people. Any volunteer can now take Wagner on an outing in their own vehicle, which is exactly what Moira had hoped. (Way to go, Moira!) His caregivers are thrilled for him, too, and grateful to Moira for the time she’s spent helping bring him to this level. Along the way, Wagner’s shyness has improved during the two months he’s lived at Best Friends. He may not yet solicit attention, but he allows even strangers to pet him. This is one impressive pooch.

Bottom line, Wagner the "bassador," as he’s called lovingly (you know, a basset/Labrador mix!), is now ready and willing to join people on other adventurers on the road. Come one, come all!

There are also many other wonderful companion animals waiting to go home with you, click here to check them out!

Give to Best Friends and help us help more animals in need. You can even give in creative ways, like by donating your old clunker car. Together we can reach a time of No More Homeless Pets!