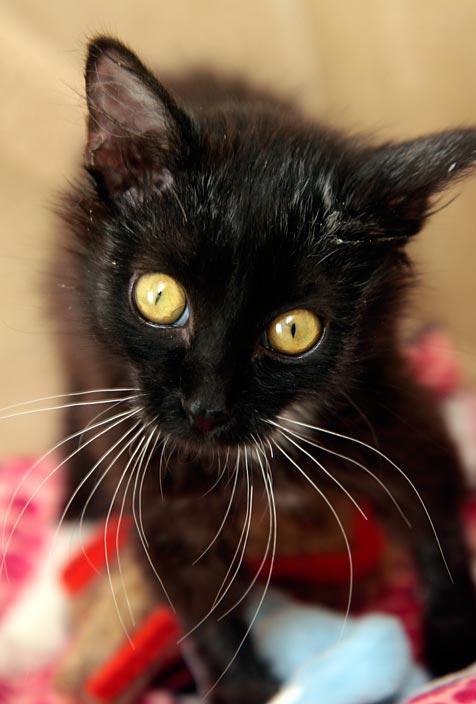 Kitten with a strong will to live

When Nellie the kitten was found as a stray lying on the ground, things looked pretty scary for her. The poor little thing wasn’t moving. After being rushed to Best Friends for medical attention, her prognosis didn’t improve much. "She was more or less comatose," said Best Friends medical director Dr. Michael Dix.

Nellie had an extremely low body temperature and remained motionless during exams. For such a tiny kitten, medical care was not easy to give. With low blood pressure and her small body, inserting an IV catheter took serious skill. But the vet techs at Best Friends are as talented as they come. They were able to insert a catheter and could soon administer fluids. They warmed up her body and kept constant watch, yet it was anybody’s guess how things would turn out.

She recovered slowly. Things weren’t helped any by an abscess that formed on top of her head. As best the medical team can determine, Nellie sustained a head injury. She might have been hit by something or bitten by another animal. She never had obvious wounds, but the abscess was suspicious. More suspicious, though, was the fact that she started walking in circles. She doesn’t have cerebellar hypoplasia, so that leaves head trauma as the most likely culprit.

Kitten's strong will to live

Even with everything the medical team did for her, a lot was up to Nellie. Good thing, then, that she’s such a fighter. Despite all the procedures she had to endure at the clinic, she kept up a good attitude. Nellie didn’t complain during ear exams, fluiding, medications, or anything else. She wanted to get better.

After a lengthy stay in the clinic her health stabilized to where she could move into the kitten building. "Nellie has such a strong will to live," says kitten mom Jean Morris. Her regular medical care continues in the kitten room and Nellie remains a trooper with every treatment. She’s come a long way.

Considering what she’s been through, perhaps the biggest miracle is how much she still enjoys and seeks after affection. If anybody shows up in her room, caregiver or complete stranger, Nellie rushes over to say hello as quickly as she can cover the distance. She still walks in circles — and in fact may never walk straight again — but she keeps trying until she reaches the visitor and can lean in for pets and love. Within seconds, Nellie turns into a tiny purr-box, soaking up as much TLC as she can. Here’s a girl who has good reason to get better. She knows that so many people already love her!

Nellie’s condition is still a bit up and down, with some good days and some bad. With all the love and support around her, Nellie knows she has help in her corner. As far as she’s concerned, she promises to do her part.

Special-needs animals like Nellie need extra care. You can sponsor many of the animals here at the Sanctuary.