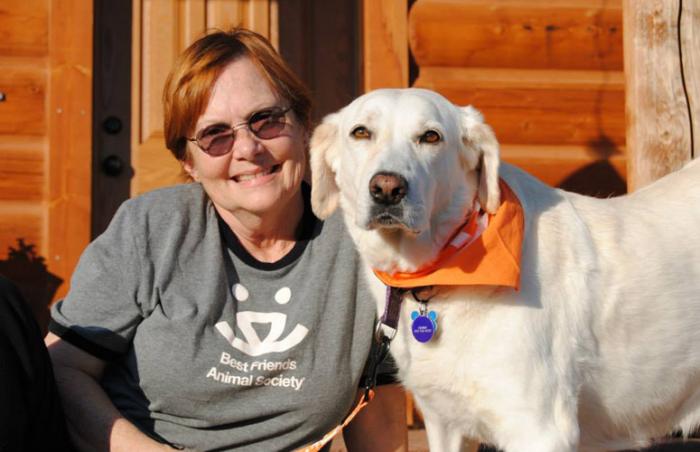 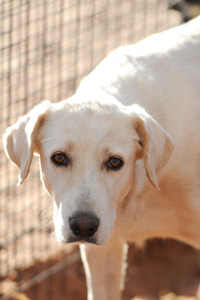 When she arrived at the Sanctuary, Mama Stormy was two years old, and it was clear she hadn’t spent much of her two years in the company of people. The Labrador mix had been living in a storm drain in Dallas, Texas, where she was found nursing three puppies. Luckily, the little family was brought to safety at Dallas Animal Services, but while her puppies found homes, Mama Stormy was terrified of people. She’d need lots of love, care and time before she’d be ready to live in a home, so she came to Best Friends to get just that.

To help build Mama Stormy’s courage, Dogtown caregivers paired her up with a dog who loves people, and had her meet lots of other dogs who could be her role models. Soon Mama Stormy began to follow their lead, and her life began to change for the better. Maybe living with people one day wouldn’t be such a bad thing.

After six months at the Sanctuary, the scared mama dog had made amazing progress. She trusted people enough to let them leash her up and take her for walks. “She learned to trust her caregivers,” says Dogtown caregiver Carissa Hendricks, “because her dog friends trusted and loved us, and she trusted them.”

One step closer to home

As the next step toward getting her ready for a home, Dogtown staff had Mama Stormy start meeting more Best Friends staff members, including executive assistant Maggie Dahl. “At first, I would sit in her room and toss cookies at her,” says Maggie. Once Mama Stormy began to feel more comfortable with Maggie in her room at Dogtown, she was brave enough to spend time in Maggie’s office. Then Maggie offered to foster Mama Stormy. It would be the first time — or at least the first time in a very long time — for the shy dog to live in a home. But if she could handle it and eventually settle in, she’d be one step closer to a happy life in a forever home.

During the first several months that they lived together, Mama Stormy wouldn't let Maggie touch her. “It took time, patience and gentle confidence-building to get her to trust me,” she says. Gradually, Mama Stormy began to feel more comfortable. While she used to spend a lot of her time hiding, she started to greet Maggie with a tail wag. Then she let her guard down enough to start playing with toys, and eventually even began romping around with Maggie’s small dogs and her cat.

For the first time in her life, Mama Stormy wasn’t just surviving. She began to thrive. 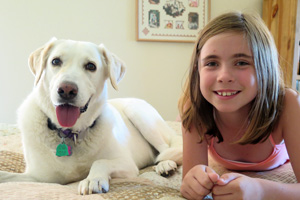 The shy yellow dog had come so far, but she still had a little further to go. Dogtown staff and Maggie had helped Mama Stormy get ready for her big day — the day when a family visiting Best Friends asked to meet her.

Marsha Stimac and her family were volunteering at the Sanctuary when they heard about Mama Stormy. Staff helped arrange an introduction, and the shy dog overcame her fears enough to take a treat from Marsha. “She won our hearts,” Marsha says. Soon, Mama Stormy was on her way to a new life with Marsha and her family in Colorado.

Since settling into her new home, Mama Stormy, whose new name is Chessa (which means “peaceful”), now finds joy in the things that once terrified her. She loves nothing more than going along with her new family on walks, rides into town and visits to nearby parks. When she’s not out and about, she’s happy to relax in the yard, watch wildlife and hang out with her new brother, Kane, a rambunctious German shepherd.

Now that the storms have passed and Chessa has learned that people are her friends, she’s finally living the peaceful life everyone she’s met along the way hoped she’d get, and knew she deserved.

To bring hope and healing to more animals like Chessa, support our work.